And it's got an edge on the competion 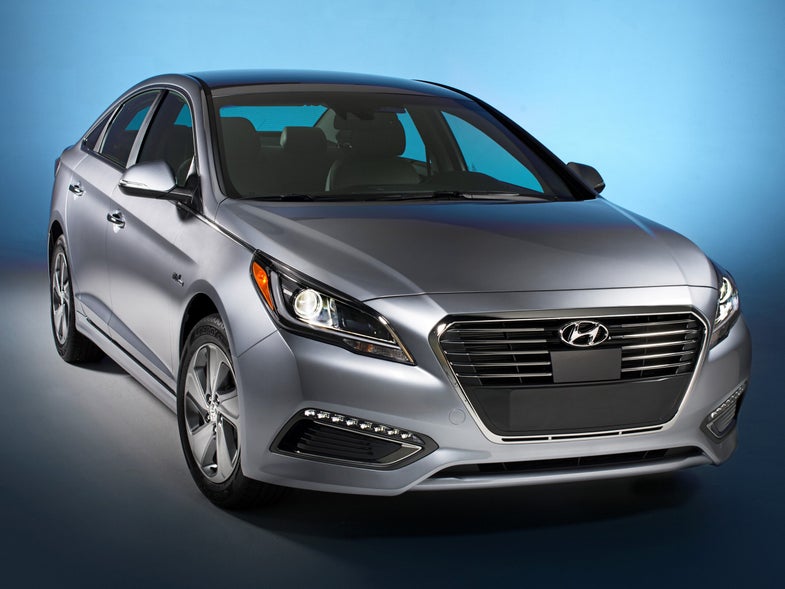 Hyundai chose Detroit to debut its first-ever plug-in hybrid, the 2016 Hyundai Sonata PHEV. It’s expected to travel 22 miles per charge using electricity alone, or a bit farther than other PHEVs on the market right now, including the Toyota Prius PHEV and the Ford C-Max Energi.

That edge in electric-only distance comes thanks to a 9.8 kWh lithium polymer battery. The battery powers a 50 kW electric motor, which Hyundai has deemed the “Transmission-Mounted Electric Device,” or TMED. As with other plug-in hybrid vehicles, the motor works in concert with a gasoline combustion engine—in this case a 2.0-liter four-cylinder model. The new Sonata PHEV can drive faster on electric than traditional, non–plug-in hybrids already on the market. (As the PHEV approaches highway speeds, its gasoline-powered engine kicks in to create the power necessary to accelerate.)

The Sonata PHEV will also have a “Level 2” charger—the same type used to replenish electric-only vehicles—so it can recharge in about two and a half hours. Plugged into a regular household outlet, it might take about five hours. But not to worry: The beauty of the PHEV is that when that charge is depleted, the car operates like all the hybrid vehicles we’ve come to know and sort of love, with the motor and engine working together. In the Sonata PHEV’s case, that adds up to 202 horsepower while getting 40 mpg (combined city and highway).

Like everything else on the planet, the 2016 Sonata PHEV will have an app when it arrives at dealerships in 10 states later this year. Blue Link, as it’s called, allows you to manage charging and take advantage of variable electricity rates in your city—that way, if electricity is cheaper at 2 a.m., you can instruct the car to power up then. You can also check your car’s battery state, how long it will take to fully charge, and get a fuel range estimate before you even step behind the wheel.