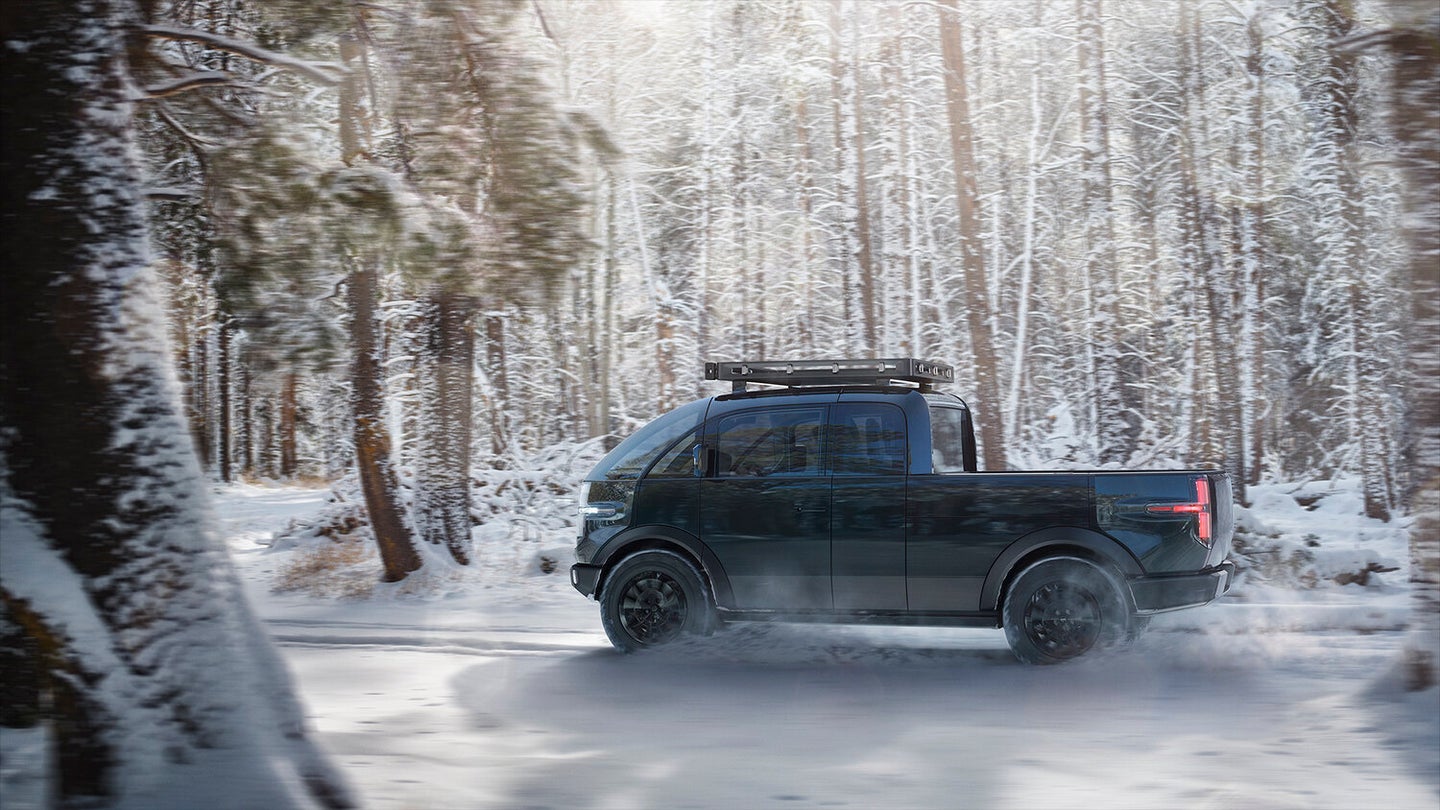 The roof rack will be one of the early accessories. Canoo
SHARE

Right now, the electric pickup truck landscape includes a lot of lofty promises. Last year, Ford foreshadowed an electric truck that will be more powerful than its ultra-popular F-150. Bollinger claims it will start building its long-awaited 4×4 by the end of this year. Rivian says its flexible vehicles will start shipping in the summer. And Elon Musk has shown us the Cyber Truck, which will come along…eventually.

This week, there’s a new product for pickup enthusiasts to pine after. A company called Canoo says its unique-looking pickup truck will start shipping in 2023. The automaker isn’t new to the electric vehicle space. It has already teased both a van and a delivery truck slated for 2022, but the pickup will be much more accessible to the average person.

The first thing you’ll notice is the extremely cab-forward design. With no motor in the front to take up space, Canoo moved the entire cabin upward to fit a six-foot bed into a smaller footprint than a typical pickup has. That seating position and curved window also provide excellent visibility for the driver.

Canoo’s truck will come in several versions, the most powerful of which will use a dual-motor set up to crank out 600 horsepower and up to 550 lb-ft of torque. The other option is a less powerful rear-only motor setup.

From a battery standpoint, however, the truck promises “200+ miles” on a charge, which seems relatively paltry compared to other electric vehicles on the market, which are pushing well beyond that. Obviously the truck form factor adds some weight, and the power level will also affect the real world performance, but that number may scare off some users, especially those who plan to use built-in power outlets to provide juice for tools on the job site.

It’s just 184 inches long but comes with a pull-out bed extender that brings the total length out to 213 inches. That means it can fit a 4′ x 8′ sheet, which is common for materials like lumber and drywall. If you don’t need large, uninterrupted space, modular dividers allow drivers to break up the bed into smaller areas that will prevent toolboxes and other small objects from banging around during transit.

The bed even has flip-down side tables to act as job site workbenches. There’s another fold-down work table in the front where the grill would typically go on an internal combustion truck.

The company has also promised, “a variety” of camper shells, including a prototype with an angled tent that sits over a hard bed cap. While the round front looks slightly weird as a pickup, it makes a very slick-looking camper.

It’s hard to know exactly where the Canoo will fit in compared to other vehicles when it launches in 2023 because it may have a lot more tangible competition at that point. If you want a Canoo in the early wave, you’ll be able to pre-order one starting in Q2 of 2021. As with pre-orders on just about every electric pickup, however, it’s good to approach that estimated ship date with caution. Just ask anyone who has already pre-ordered a Cyber Truck.