The company has more than delivered on its promise to electrify the F-150. Here's how it performs. 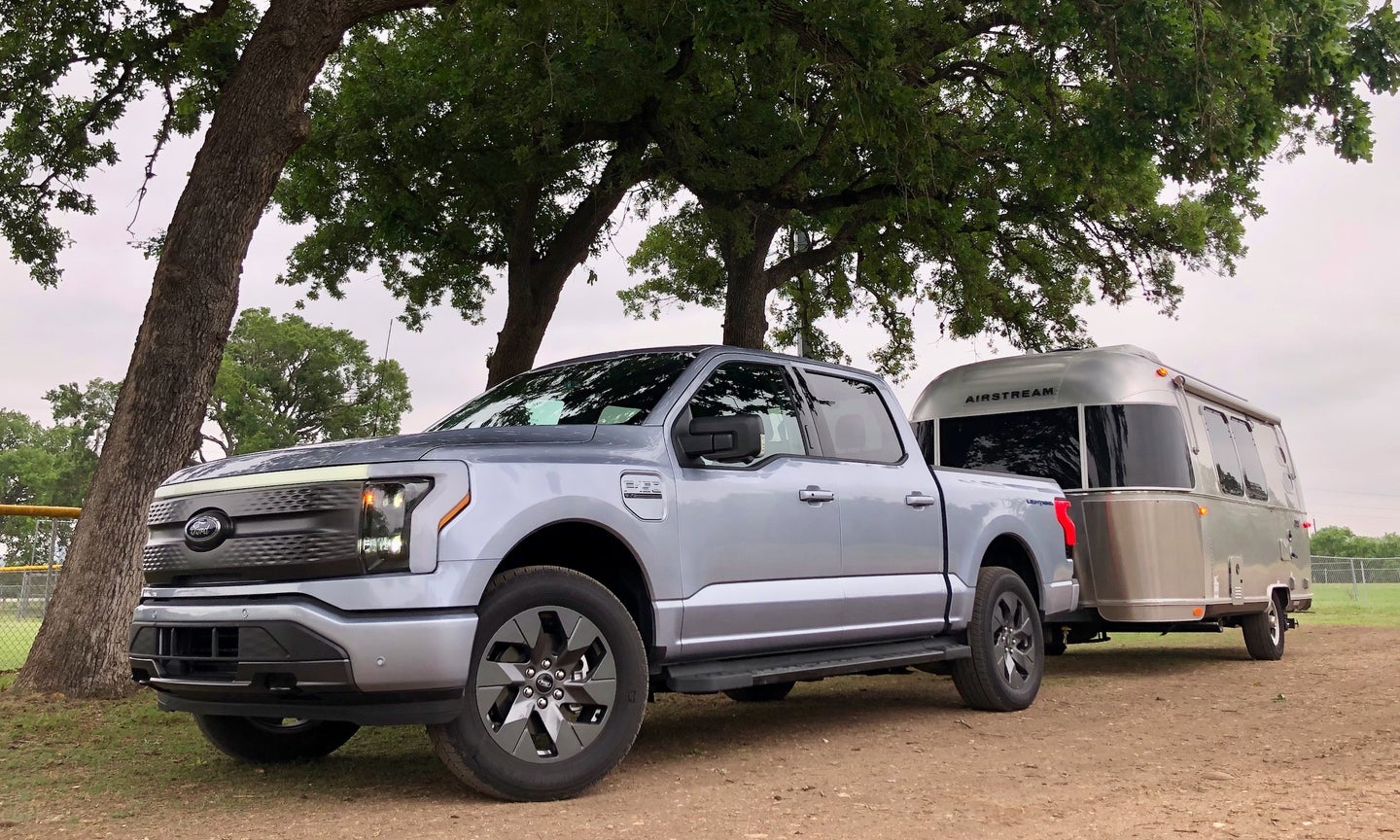 The new electric version of the F-150 delivers on its promise. Dan Carney
SHARE

A Ford F-150 pickup truck must be an F-150. Ford’s F-Series pickups have been the best-selling vehicle in America annually for decades, with sales of 726,000 trucks in 2021. It is a crucially important vehicle for Ford Motor Co. and for the US economy.

As such, Ford isn’t taking any risks in the transition to electric power for its most important model. “This one’s the real deal,” pledges Ford vice president of electric vehicle programs Darren Palmer, while addressing media at the F-150 Lightning’s press drive program in San Antonio.

Indeed, Ford’s new electric pickup casts a shadow over the entire industry as skeptical consumers worry whether EVs will deliver the functionality they need. Ford aims to calm those concerns by showing that battery-electric power is even capable of replacing combustion power in its “Built Ford Tough” F-Series trucks. Seeing this toughness and capability will cause buyers of other models greater confidence that their needs will also be met by electric power, the company says.

“It is a unique opportunity to get people’s attention for what an EV can do,” explains Palmer. “You can’t ignore [an electric F-150]. “We feel it is going to pull a lot of people into EVs who wouldn’t have considered one before.”

He’s right. Two days behind the wheel of the 2022 F-150 Lightning in Texas hill country proved the point that the truck more than delivers on the promise of truck capability and EV efficiency. I had the chance to drive the Lightning on city streets, rural two-lanes, Interstate highways, and off-road. I tested it unladen, carrying a payload, and towing a 5,000-lb. Airstream camper.

Through all of those conditions, the Lightning delivered, and then some. Consider the fact that Ford is launching the Lightning as an all-wheel-drive-only machine, and realize that even the less-expensive configurations deliver incredible capability. It was the unique ability of an EV to outperform the familiar combustion model that sold skeptical truck owners Ford surveyed three years ago as part of its Project Edison EV study in 2017, Palmer says.

When told about the potential capabilities of an EV truck, with its massive power and torque, tremendous towing ability, and the ability to create a secure front trunk (“frunk”) in the underhood space vacated by the gas engine, these truck owners quickly stopped caring about the Lightning’s source of power.

While repurposing that space into the lockable trunk space that trucks normally lack seems obvious, it was not easy, remarks Palmer. “If you think that is easy, think again,” he says. “Everything you need is in there: brakes, air conditioner, things like that.”

When truck owners learned of additional benefits, such as the ability for the Lightning to power electric tools on job sites, appliances at camp sites, or even entire homes at disaster sites, these dedicated truck owners were sold, reports Palmer.

Here are the numbers that have proved to be catnip for the 200,000 people who’ve placed orders for the Lightning: The dual motors deliver a stunning 775 lb.-ft. of torque through all four wheels. The truck’s standard battery packs 98 kilowatt-hours of juice, which is similar to the capacity of a Tesla Model S. The optional extended-range battery carries 131 kWh of energy. The dual front/rear electric motors combine to produce 452 horsepower in trucks using the standard battery, and the same motors put out 580 horsepower with the extended range battery, because the bigger battery pack can provide more power to the motors.

The EPA says the standard pack is good for 230 miles of driving, while the extended range pack will go 320 miles. For customers who expect to haul loads, an available Onboard Scales system can gauge the weight loaded in the bed, letting the trip computer calculate expected driving range correspondingly.

Trucks with the extended range battery and the optional Max Trailer Tow package can tow trailers as heavy as 10,000 pounds, and again, the truck recalculates the anticipated range with the trailer. The standard-range battery has a maximum towing capacity of 7,700 lbs. My test truck predicted that it would be able to drag the Airstream camper 238 miles on a charge, but looking at the actual consumption I experienced in the truck, it looks like it would actually have run out of power after 150 miles.

This number also corresponds to the truck’s 1.3 miles per kilowatt-hour, as reported by the computer while I was towing. With a 131-kWh extended-range battery, this efficiency projects to 170 miles. These are credible distances for casual towing, while the serious heavy-duty long-distance trailer-towing drivers will likely stick with their diesel heavy-duty machines.

Pulling the Airstream camper behind the Lightning is easy and stress-free. The massive torque churning through all four wheels lets the truck pull away from a stop effortlessly. One of the tougher aspects of towing a large trailer is merging into traffic on a highway. The combined length of the truck and trailer requires a large opening in traffic to merge onto the road, and their combined mass can make it challenging to get up to speed to match that of the cars on the road.

The Lightning makes merging into traffic easier because it can accelerate hard enough while pulling a trailer that it arrives at the merge point going just as fast as the other traffic. Rolling on the on-ramp at about 20 mph, I floor the Lightning’s accelerator to test the truck’s acceleration. The Lightning surges forward, with the front tires squealing, and within seconds the rig is merging effortlessly into the 70 mph Interstate traffic flow.

Without a trailer, the Lightning can shoot to 60 mph in about 4.5 seconds with the extended-range battery. Standard-range battery drivers will see five whole ticks of the stopwatch on the same run.

Freed of the trailer, the unhitched Lightning delivers an everyday driving experience better than the familiar gas-fueled F-150s. The truck’s independent rear suspension system provides a cushier ride than we’re accustomed to from the traditional solid-axle truck, particularly those with the old-style leaf springs.

Two other electric pickups we’ve already tested, the Rivian R1T and the GMC Hummer EV, also have independent rear suspension, but these vehicles don’t line up as direct competitors for the F-150. Neither has as large a bed as the F-150. The Hummer is optimized for off-roading, while the Rivian’s exotic linked hydraulic damper system (the same as employed by McLaren sports cars) endows the R1T with a miraculous combination of on-road handling and off-road prowess.

The F-150 has a smooth, comfortable ride, but it still drives like a truck. Especially because of the low-rolling-resistance tires the Lightning uses to maximize electric driving range have less grip than normal tires would, it suffers abundant understeer, sliding the front tires when I pitch it into curves in the rolling Texas hill-country back roads. Which is pretty typical full-size pickup truck behavior, confirming the Lightning as an authentic F-150!

Less traditional is the Lightning’s enormous center display screen, which at 15.5 inches is large enough to elicit remarks from passers-by while the truck is parked. It is like the one from the Mustang Mach-E with its innovative stick-on physical volume knob for the entertainment system. In addition to its navigational and entertainment features, the center screen provides access to the Lightning’s EV settings, its drive modes for Normal, Sport, Tow/Haul, and Off-Road.

The Off-Road mode lends the Lightning solid mobility in dirt and mud, despite the very unsuitable efficiency-oriented tires. It is one of the benefits of electric drive that the truck can apply the power to each wheel for most possible traction. A driver-selectable electrically locking rear differential helps minimize slippage to let the truck crawl through slippery conditions and up rock scrambles.

This doesn’t mean it has serious capability off-road in the manner of Ford’s Bronco or like the Hummer EV, but it demonstrates the ability to go through some pretty tough conditions. While the Lightning has one-pedal EV driving in other modes, Off-Road mode disables the ability to start and stop using just the accelerator pedal, as I found to be so impressive in the Bronco.

However, Ford engineers point out that the gas F-150 has off-road-oriented models, like the FX4 and the Raptor, and that the Lightning is not an off-road-oriented model. This also explains why it lacks a Hill Descent Control feature, which automatically limits the vehicle speed crawling down steep descents. So perhaps we’ll see these kinds of features in a future electric off-road-focused F-150 model.

Our truck certainly wasn’t lacking for other amenities. The tested Lariat has a base price of $67,474, and the as-tested configuration costs $81,099. I drove extended-range Lariat models on the highway and for the trailer-towing test. For the off-road drive, I was in an XLT with the standard battery, so its base price is $52,974 and the as-tested price is $54,669.

These prices seem steep, but they are solidly in line with typical pickup truck purchase prices, and for a while longer customers will still be eligible for a $7,500 federal tax rebate for purchasing one.

The company’s challenge is not finding willing buyers but to deliver the trucks to customers desperate to get them. Ford holds orders for 200,000 trucks but has the ability to build only 150,000 trucks in 2023 because that’s how many batteries they expect to be able to get for them.

Now maybe Ford is a little sorry they did such a good job convincing gas truck traditionalists that the F-150 Lightning is their best next purchase. But they’d surely have started to figure that out by now, anyway.