The 2022 Maverick pickup truck is a hybrid that boasts some 40 mpg in the city. 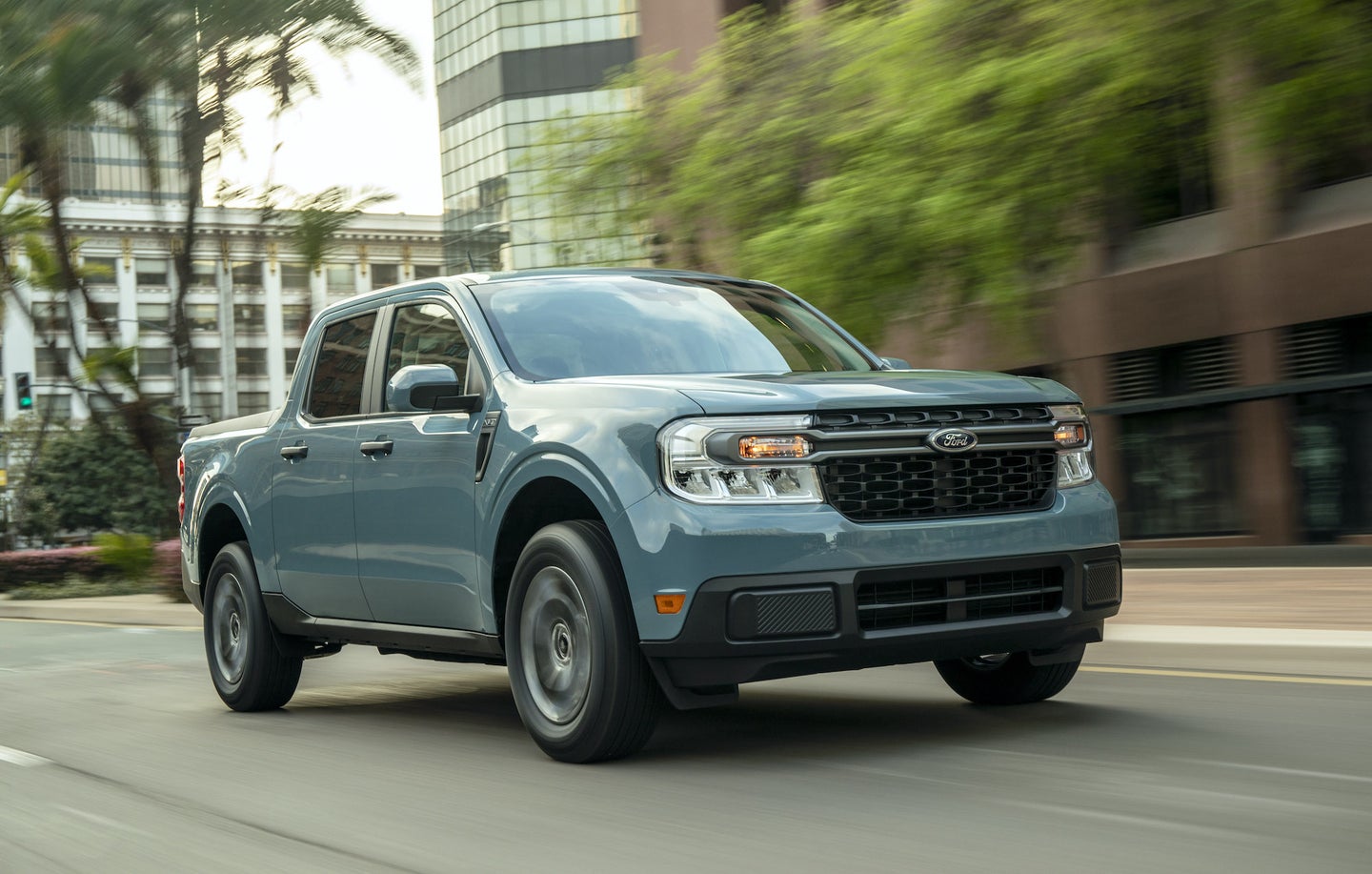 Pickup trucks are one of the best selling vehicles in America. It’s easy to see why—they offer excellent visibility and unmatched utility no matter where they’re driven. But trucks have gotten so bloated and expensive that many buyers have chosen to go the route of the crossover instead. But perhaps not anymore.

The 2022 Ford Maverick is the latest entry in a number of new compact utility vehicles aimed at filling the truck-sized hole between crossovers like the new Ford Bronco Sport and mid-size pickups like the Ford Ranger or Chevrolet Colorado. With a starting price of around $20,000 and a standard hybrid powertrain offering up to 40 miles per gallon, the Maverick is quickly working to secure its future home in both suburban driveways and on city streets.

It was nearly a decade ago that Ford cancelled the mid-size Ford Ranger to focus efforts on its best-selling F-150. Since then, it not only brought the Ranger back to life, but also introduced this brand new compact pickup, the Maverick, based on the Bronco Sport slotted directly below it.

The Maverick is far from a normal truck. For evidence, simply look under the hood and you’ll find a hybrid powertrain which uses an electric motor to power the truck in conjunction with its gasoline-powered 2.5-liter four-cylinder engine. The pair deliver 191 horsepower and 155 pound-feet of torque and sends power to the wheels via a continuously variable transmission (CVT). This combination isn’t something which most traditional truck buyers are rushing out to buy, yet it comes standard on the Maverick—and that’s because the Maverick isn’t meant for traditional pickup buyers. Ford says this powerplant is capable of achieving around 40 MPG in the city, a figure relatively unheard of for a truck. That’s comparable with the Honda Civic!

However, there’s a catch—the hybrid is only available in front-wheel drive, and isn’t particularly suited for towing more than 2,000 pounds due limitations from the CVT transmission.

To make their rig more capable, buyers have the option of upgrading to the optional 2.0-liter EcoBoost engine, a turbocharged engine which produces a more brawny 250 horsepower and 277 pound-feet of torque. This also outfits the truck with an eight-speed automatic transmission and gives the option for buyers to upgrade from front-wheel to all-wheel-drive. With the optional 4K Tow Package, the truck receives a transmission oil cooler, upgraded radiator, gearing changes, and more—all of which enables it to double its towing capacity up to 4,000 pounds.

All Mavericks will be offered in the same body configuration: a crew cab with a 4.5-foot bed in each of its three trims—XL, XLT, and the top-tier Lariat.

A truck of a different color

From the outside, the Maverick can be configured to blend in with the crowd or stick out like a sore thumb—a nod to the younger buyers Ford hopes to attract with the compact pickup. A total of 11 different paint jobs are available depending on the trim, including a number of fun Ford hero colors like Velocity Blue, Rapid Red, and Cyber Orange.

The bodywork stays mostly the same throughout the lineup. Design language is modern with sleek body lines throughout the entire exterior package, all while maintaining a look immediately recognizable as a Ford. However, there are some subtle design changes to the truck depending on the trim, such as changes to the grille, wheels, mirror caps, headlights, and more. Buyers who opt to equip the FX4 off-road package will see additional changes, like exposed front tow hooks and special 17-inch wheels with all-terrain tires in addition to the more hidden suspension modifications and underbody protection.

Of course, the most important part of any pickup is the cargo box, something which Ford keeps extremely practical on the Maverick. It’s called the Flexbed, and the name is fitting given how flexible it can be for just about any job.

The 4.5-foot bed isn’t the biggest pickup box on the market, and it wasn’t meant to be. Still, it can hold up to 1,500 pounds or a four-by-eight foot sheet of plywood. As an aside, the top of the bed is trimmed with plastic bed rails to avoid scratching the Maverick’s loudly-painted body as cargo is loaded and unloaded.

When folding the tailgate flat, the bed extends to six feet of usable area, and Ford has a number of extra accessories to keep kayaks and other large items fixed in place. Wider items can be a bit trickier, because the truck’s overall footprint is significantly narrower than its larger brethren and the wheelhouses still take up some room. Because of this, Ford added an additional position for the tailgate which raises the lip by resting it at an angle. This brings the resting position to the same height as the wheelhouses, meaning a large sheet of plywood can sit flat.

There are a few extra party tricks such as sliding interior bed rails, a small in-bed cubby for an extra bit of storage, a power outlet, a bed light, and a bottle opener built right into the tailgate.

The interior is also pretty snazzy. Every surface incorporates modern angles and design cues, while some contemporary material lines the cloth seats and dashboard elements. Door cards sport a neat geometric pattern, and the grab handle utilizes a floating design to look futuristic. Interior plastics are mostly a shade of blue, a flashback from classic cars, though certain add-on packages will add fun accent colors like bright orange to the mix.

Pickups traditionally suffer from a lack of dry lockable storage given the lack of a trunk. Because of this, interior storage and the organization thereof comes at a premium. Ford maximizes on this in the Maverick, adding nooks and cubbies just about everywhere blank space would have been found. Even the rear seats are used as storage devices—once the bench is flipped up, perfectly segmented under-seat storage bins are found, which are useful for securing and stashing away cargo that drivers won’t want rolling around on the floor.

This mid-size pickup market seems to be just being tapped by automakers. As of now, the only other manufacturer to announce a potential competitor is Hyundai. Its upcoming Santa Cruz is targeting similar young buyers who live in cities or other markets where a traditional full-size pickup might be desired, but simply isn’t ideal.

Ford says the Maverick will start at a base price of $19,995 before destination charges. Most buyers will likely swing for the middle-of-the-road XLT (which is priced at starting at $22,280) as it includes a myriad of basic features that the XL simply doesn’t have—power mirrors and cruise control to name two very basic ones. Even fully loaded, the top-tier Lariat can be equipped with the more powerful 2.0-liter turbocharged motor, all-wheel-drive, and every available options package for just north of $36,000. That’s still pretty affordable, especially for a pickup truck. The 2022 Ford Maverick is set to land on dealer lots beginning this fall.