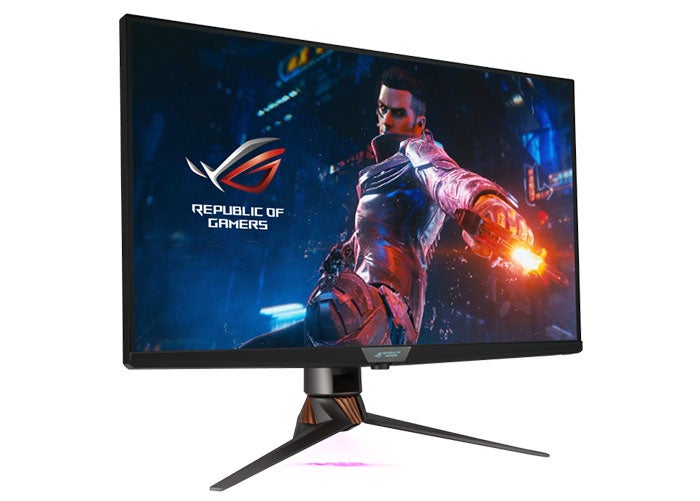 There are more than a thousand small LEDs behind the screen. Asus
SHARE

First-generation tech products typically cost a premium, even compared to the flagship models of the current generation. Last week, Asus followed that grand tradition by announcing the ROG Swift PG32UQX gaming monitor. It’s the first in its category to rely on mini LED backlighting,

mini LED displays rely on a field of tiny (hence the name) LEDs behind the panel to provide the backlight. That’s opposed to older displays, which relied on light sources around the edges of the screen or OLED, in which each pixel produces its own light. The latter typically shows up in high-end TVs. In the ROG Swift’s case, the 32-inch monitor has tiny LEDs arranged into 1,152 independent zones that can adjust their brightness independent of one another.

This is called Full Array Local Dimming (FALD) and it has a few advantages over its competition. Individual areas can turn off completely, which provides darker black levels than its edge-lit competition. That raises the perceived contrast ratio, which makes the image on-screen pop more. Smaller, more precise zones also cut down on light bleeding out of a bright object on screen into dark areas surrounding it.

If you have been paying attention to this year’s crop of new gadgets, mini LED already probably sounds pretty familiar. Both Samsung and LG have integrated mini LED into their current crop of TVs. Apple also brought mini LED to its new iPad Pro displays, which borrow heavily from its Pro Display XDR.

The rest of the Asus ROG Swift PG32UQX specs

Beyond its backlight, the ROG Swift monitor offers most of the specs you’d expect from a pro-grade gaming monitor. It’s a 4K display with a total resolution of 3,840 x 2,160 spread across its 32-inch screen. Its 144 Hz refresh rate combines with Nvidia’s G-sync to ensure smooth gameplay without screen jitter.

While it’s primarily built for gaming, Asus added some color management features that should make it a fairly capable bit of gear for designers, photographers, and video editors as well. Asus claims it comes calibrated from the factory for accurate color. It can produce 98 percent of the P3 colorspace, which is important for filmmakers.

For connectivity, the ROG Swift has a single DisplayPort 1.4, as well as a pair of USBs. It has three HDMI ports, but they’re only HDMI 2.0 instead of the more robust HDMI 2.1. In all fairness, HDMI 2.1 is still basically non-existent in the gaming monitor space, but it would be nice to see in a $3,000 display.

Because Asus expects gamers to use the monitor for streaming, it has included a built-in tripod socket on top of the monitor for securing a webcam, which I hope becomes standard issue now that streaming and video calling have become such huge parts of our lives.