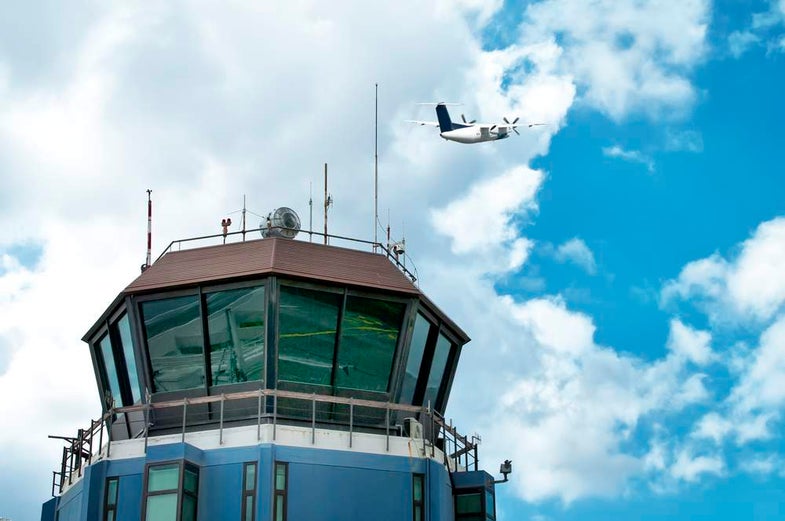 “They try to help pilots in emergency situations in their thought process,” says Jerry Wolfe, a professor in aviation technology at Green River College in Washington state. “If the controller can stay calm, there’s a greater likelihood the pilot on the other end will remain calm as well.”

On the evening of Aug. 10, the world heard proof of this process almost in real time, as an air traffic controller near Seattle-Tacoma International Airport attempted to guide ground service agent Richard Russell after he stole a Bombadier Dash 8-Q400 belonging to Horizon Air. Fortunately, the 76-seat twin-engine turboprop was empty.

Radio recordings of Russell’s communications with the air traffic control center went viral on Twitter and have since been shared selectively by the press. They paint a troublesome portrait of a man in crisis. (Russell died in a crash after more than an hour in the air. No one else appears to have been injured.) But, on the other end, they revealed a consummate professional, identified in the tapes only as “Andrew,” who deftly managed the situation from an air traffic control center on the ground.

Just to be clear: I don't think any of this is funny. I'm not trying to make light of the situation or to make fun of someone who is clearly in crisis. I think it's profoundly sad. I just hope these clips can help shed light on the man's state of mind.

While the Horizon Air incident is still under investigation by the FBI, outside air traffic control experts say it was all in a day’s work. “I don’t think it’s much of an outlier,” Sharon LaRue, a professor in aviation technology at the University of Alaska at Anchorage, says of the Horizon Air controller’s response. “But that doesn’t mean it wasn’t extraordinary.” Not every situation is handled so sure-handedly, she adds, but air traffic controllers have one thing on their side: extensive training.

Before they can get into the control room, every air traffic expert must first complete the FAA Academy in Oklahoma City, which stretches anywhere from two to five months. But the path to the academy varies widely, according to LaRue. Some controllers are recruited directly by the FAA. Others have prior experience through the U.S. military. And about half go through one of the 30-odd aviation technology programs to prepare, like those at Green River College and the University of Alaska.

Wolfe, from Green River, says the most promising candidates display good decision-making and data analysis skills. “And at the same time, you need to have a temperament that allows you to be flexible enough to make changes along the way,” Wolfe says. Classroom discussions of real and hypothetical scenarios, and simulated traffic labs help further refine these skills over the course of the program.

A passenger with a medical condition that demands an emergency landing, icing on the aircraft, and traffic conflicts all “constitute an emergency that requires some quick thinking,” according to Wolfe, but they become routine with enough training. “Perhaps the closest thing to [the Horizon Air incident] would be something where there’s a compromised pilot,” he says. Whether it’s health issues like hypoxia from a loss of cabin pressure, or a hijack situation, “all of those are scenarios that can be and are practiced.”

Even on a normal day, guiding aircrafts safely to their destinations requires an elaborate song and dance involving no less than three kinds of air traffic controllers. From the tarmac to the point of departure, planes are guided by an airport’s air traffic control tower. After that, Terminal Radar Approach Control or TRACON, takes over, helping pilots navigate the busiest part of the airspace, which stretches anywhere from 20 to 100 miles around an airport. And phase three is the domain of the en route controllers, who help planes once they’ve reached altitude. When it comes time to land, the entire process is executed in reverse.

That’s why training continues even after controllers graduate from the FAA Academy. Depending on the size of the airport or control center, controllers receive an additional one to three years of on-the-job training, according to LaRue. And once they’re ready to work cases on their own, they’re never truly alone. “A big focus on aviation is in teamwork,” LaRue says. “That controller [in the Horizon Air incident] did an amazing job, but there were other people there helping.”

In a high-trafficked area, a single center can have 300 to 400 controllers. Every flight has a point person on the ground, but controllers are managed by seasoned supervisors. If someone has expertise with a particular plane or problem, they’ll provide technical assistance to the controller. And when crisis hits, controllers will cover their coworker’s other responsibilities, ensuring the point person can focus exclusively on the problem at hand. “There’s a big fraternity in the sky,” LaRue says.

Even the most experienced air traffic controller could be undermined by runaway emotions. That’s where self-control comes into play, says Alex Cisneros, an air traffic controller at Southern California TRACON and a facility representative for the National Air Traffic Controllers Association. “We try to have a little muscle memory there to accomplish the task,” he says. “But what I find myself doing is, I just take a deep breath.”

LaRue, for her part, talks to students about how they’re taking care of their overall health. Good nutrition and a regular exercise regimen are among the ingredients for success in such a high-stress career. “What happened last week was not anything anyone has ever trained on,” La Rue says of the Horizon Air incident. “I know when something like that goes on, you’re probably not confident and calm, but you have to train yourself to sound that way,” LaRue says. “You work the problem.”