A tale from the field. 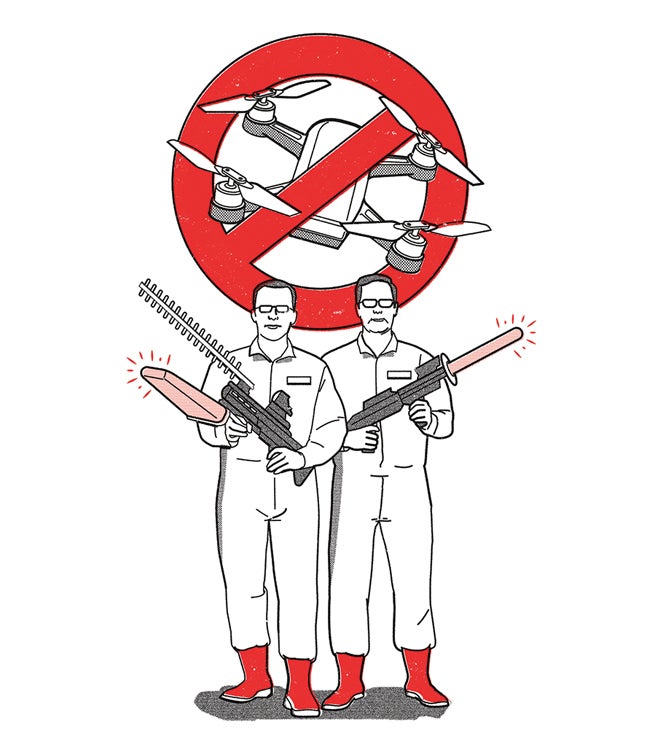 Insurgents have been using armed drones to attack U.S. troops worldwide, so my co-inventor Alex Morrow and I built the DroneDefender to help protect them. It freezes enemy drones in place by disrupting radio- and satellite-control ­frequencies, but those airwaves are protected by the FC­C, so we couldn’t just use the system—even on our own property. That’s how we wound up at Camp Roberts, California, in 2015, conducting our very first outdoor test at a ­Department of Defense showcase. The plan was for Alex to stand about 1,000 meters away from me with the drone so I could use the prototype to take it down. I was hot and sweaty to begin with, and my nerves just went through the roof. I was clammy, my stomach in knots. I’m thinking, This is the first time I’m even authorized to turn this thing on, and oh god, it just shipped from Ohio to ­California. We have no idea what FedEx has done to it.

I didn’t know this at the time—luckily, because I would have passed out or thrown up—but the 50 or so spectators on hand were talking trash about our tech, saying it was rinky-dink and would never work. Honestly, I’m not surprised they felt that way. A bunch of other companies were there showing off very expensive and complex-looking devices, then they see these two yahoos from the middle of Ohio come out with a thing that looks like a rifle strapped to one of their backs. They thought we were some garage-shop goofballs. But we had kept it simple-looking intentionally, because we wanted to make sure any soldier could pick it up and use it in seconds.

The first time Alex sent the drone at me, I stopped it too far away, about 250 meters. The crowd wasn’t sure what had happened. So on the next try, I let it get about 100 meters away from me before stopping it in midair. There was silence. The entire crowd was absolutely still. People were suddenly very interested. I was flipping out, man. I played it cool—there were a lot of military people watching me—but on the inside, I was just screaming.