When a plane loses pressure, here’s what happens to your body

121 passengers found out recently when a Jet Airways flight crew forgot to pressurize the cabin. 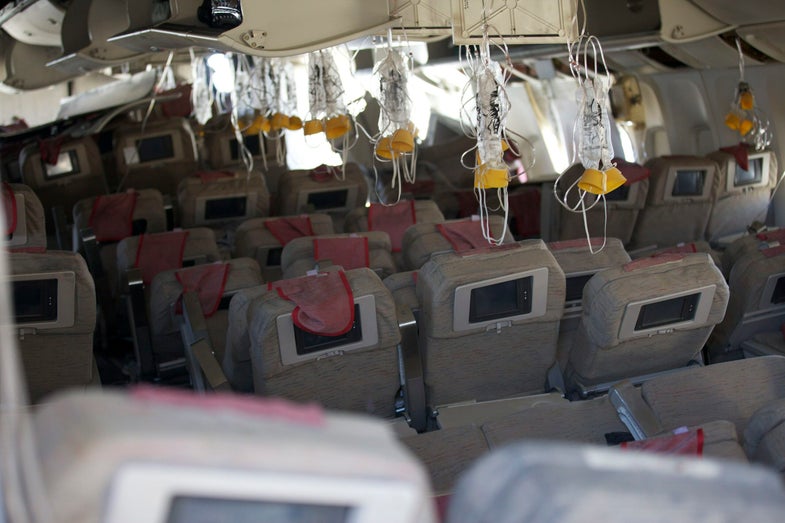 @jetairways Flight 9W 697 made an emergency landing back in Mumbai. Airplane lost pressure immediately after taking off…scores of passengers including me bleeding from nose….no staff to help…no announcement on board to wear the oxygen mask.passengersafety completelyignored pic.twitter.com/vO9O95aMCP

Most plane trips begin with a checklist. Socks? Check. Underwear? Check. Sweatshirt just in case it gets a little bit chilly one night? Check. As crucial as your undies are to a successful trip, though, a far more important checklist goes on while you’re complaining about how small the seats are getting. Flight crews do a checklist before the plane takes off to ensure they don’t forget to do something like, you know, pressurize the cabin.

But the crew on Jet Airways flight 9W 697 managed to miss that step recently on their way from Mumbai to Jaipur. The result? A plane-ful of panicking passengers, many of whom awoke from naps to discover intense pain in their ears, bleeding from their ears and noses, and a heck of a lot of confusion.

The airline itself hasn’t released much more than a vague statement, but Lalit Gupta, the deputy director general of the Directorate General of Civil Aviation told the Hindustan Times that “The 9W 697 Mumbai-Jaipur flight was turned back to Mumbai after take off as, during the climb, crew forgot to select switch to maintain cabin pressure.”

First things first: What does it mean to pressurize an airplane?

Air at higher altitudes is under less pressure and is therefore harder to inhale—the molecules of oxygen are literally farther apart. This is why when you visit a city like Denver, which is about a mile above sea level, you may notice that you tire more easily: you’re getting less oxygen to your muscles and brain.

Planes flying above 10,000 feet need to pressurize the cabin so that they can maintain a high enough oxygen level for everyone onboard to function, though they don’t actually pressurize it to sea-level pressures (it’s usually more like the 8,000 ft mark). A normally functioning plane, once sealed off at the gate, will automatically raise the pressure inside smoothly as the pressure outside drops, so that ideally you don’t notice it much. The same thing happens in reverse at the other end to bring everything back to normal.

Why is an unpressurized plane dangerous?

This loss of pressure seems to have popped some of the small blood vessels in people’s noses and ears, or perhaps even ruptured some eardrums—none of that is unheard of for a depressurization event. Your body is really only designed to work within a small range of pressures pretty close to sea level, and when you go outside that zone delicate areas get damaged. Fluid and gas are both far more susceptible to pressure than solid flesh, so these bits go first. You actually experience a minor version of this in airplanes or even in fast-moving elevators: your ears pop. There’s a little membranous vessel called the Eustachian tube inside your ear that rebalances the pressure between the atmosphere and your inner ear (there’s a little pocket of air in there). Changes in pressure can block the Eustachian tube, making a tiny, painful vacuum in that inner ear bubble. Chewing gum or even sucking on a hard candy alleviates that issue because the act of swallowing opens up your Eustachian tube.

All this is to say that your ears are very sensitive to pressure changes, so bleeding from the ears might not be all that surprising given the lack of pressure on this aircraft. Similarly, delicate blood vessels can rupture in the nose.

How does this even happen?

A lot of the time when a plane suddenly depressurizes, it’s because some kind of damage has occurred and the airtight seal keeping the pressure inside the aircraft is broken. Large aircraft are well equipped to handle this, because air masks drop and provide enough oxygen to for the pilots to get the plane down to 10,000 feet or below, where the air is dense enough to keep everyone alive and functioning. It’s crucial that this drop happen immediately, because perhaps the most dangerous part of losing pressure—despite the dramatic explosions you’ve seen in the movies—is hypoxia.

Hypoxia, or a lack of oxygen, can be remarkably hard to recognize but also completely destroys your ability to function. And it happens really fast. The Federal Aviation Administration says that “The ability to take corrective and protective action is lost in 20 to 30 minutes at 18,000 feet and 5 to 12 minutes at 20,000 feet, followed soon thereafter by unconsciousness.” Many commercial planes fly well above that, at around 35,000 feet, and at that altitude, you have 30 seconds to a minute of what’s called “time of useful consciousness”—the time in which you’re capable of making decisions like “should I put this oxygen mask on my face?” That’s why passengers are told to put their own masks on before helping their children; it sounds like a heartless instruction, but parents who put kids first might not have the wherewithal to save themselves once they’re done.

It’s also worthing noting that the FAA also notes that the effects of hypoxia can be tough to recognize, especially if they come on gradually. So if you maybe forgot to pressurize the plane and the level of oxygen is slowly dropping, it might be quite hard to tell when you or your co-pilot might be succumbing to hypoxia.

Those effects? We’ll let the FAA take this one again: “judgment, memory, alertness, coordination and ability to make calculations are impaired, and headache, drowsiness, dizziness and either a sense of well-being (euphoria) or belligerence occur.”

Because the effects are so severely impairing yet hard to recognize, many pilots—especially those in the military—go through training to experience what it’s like themselves and see it in their coworkers. Basically, a group goes into a hypobaric chamber with oxygen masks on, then one person takes theirs off and is assigned basic tasks to show at what point they stop being able to think properly. You can see it for yourself in this video:

That pilot loses the ability to even tell you what card he’s looking at—much less tell you there’s a problem or fly a freaking airplane—in just a few minutes.

This is a massive problem if hypoxia occurs before pilots are able to figure out what’s going on. The worst case scenario is something like what happened to Helio Airways flight 522 from Cyprus to Athens in 2005. Flight crew members from the previous trip noted an issue with one of the door seals, and in order to fix the problem an engineer had to switch the pressurization system to manual. He fixed the door, but forgot to switch the system back to auto, and flight crews then failed to correct it during three separate checks of the plane—and pilots managed to misidentify the literal warning signs multiple times. Eventually, they radioed to ask for help with the equipment cooling system and the very engineer who had flipped the switch to manual asked the pilots to confirm that the pressurization system was set to auto.

Unfortunately, the pilots were already in the early stages of hypoxia and kept talking about the cooling system, not understanding what was happening. Almost everyone onboard eventually lost consciousness and the plane continued on autopilot to Athens, where it entered a holding pattern. Not long after, the engines blew as they ran out of fuel and the plane crashed into hills outside Athens, killing everyone on board.

Most of the time, though, decompression is survivable. One Southwest Airlines flight got a 17-inch hole in the fuselage while flying at 34,000 feet and absolutely no one died. Two years later another Southwest flight got a 60-inch long gash in it where a joint failed, and again, everyone made it to their destination alive.

So if you’re ever on a flight that does lose pressure, rest assured that you will most likely be fine. You’ll put on your air mask (remember: put your own on before helping others) and you’ll freak out a bit while the plane descends rapidly. Then the trained professionals will, most likely, get the aircraft to the ground in one piece.