And that’s just the start of a kindergartener’s gaming woes. 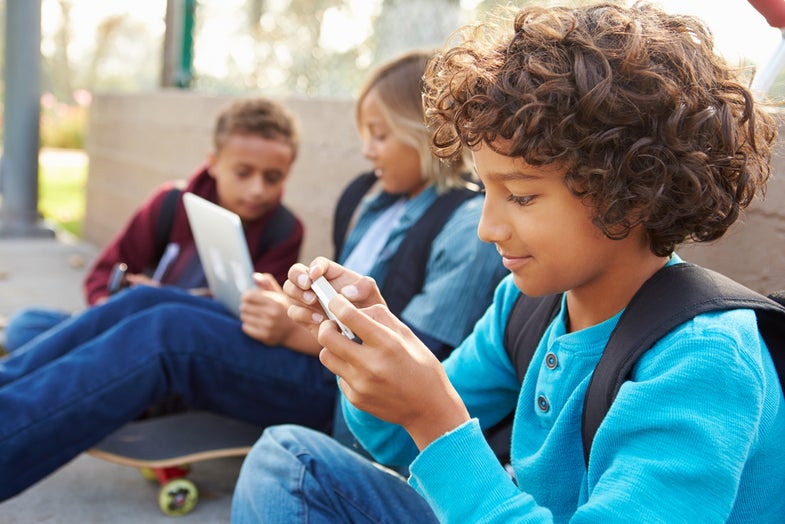 Even in apps designed for children are rife with advertisements. Deposit Photos
SHARE

The gap between games and gaming keeps on growing. While Frisbees don’t collect data on the kids who play with them, apps like those found in the Google Play store definitely do. And while a hit children’s show like Paw Patrol may have commercial breaks, a new study shows that advertisements in apps are even more insidious.

Published in the Journal of Developmental and Behavioral Pediatrics, the new data from researchers at the University of Michigan suggests that fully 95 percent of tablet or smartphone games for children feature one or more advertisements. Unlike television ads, which are supervised by federal agencies, these in-app sales exist outside conventional regulations, allowing gaming companies to set their own rules.

Jenny Radesky, a pediatrician with expertise in behavioral development and the lead author of the study, says gaming can be a perfectly acceptable source of entertainment for kids. But most of these apps treat kids like tiny adults, designing experiences that are too structured for a child’s boundless imagination, and often designed to extract money from their parents.

When you consider 81 percent of Americans under 5 playing video games on a daily basis, and 42 percent of kids under 8 have their own tablet, the stakes couldn’t be higher.

Radesky’s data is serious, but her methods are atypically fun. For this content analysis, she and two research assistants downloaded the Google Play apps most popular among children and began playing. When they regrouped to compare notes, they found that 129 of the 135 games included advertising of some kind. There were full-app teasers, which let you start a game, but ultimately demand you buy something to keep playing; video advertisements that popped-up mid-activity to sell you on in-app purchases, or another app; banners that rolled across the screen selling things; and even hidden ads designed to look like gameplay items, but really portals to buy in-game items or objects.

“We were like, this doesn’t actually feel like play,” Radesky says. “Play for kids is ridiculous and messy and full of challenges and problem-solving. It should be unconstrained by the adult forces in your life.”

Many adults have adapted to the constant onslaught of advertising in the modern world, but children are uniquely susceptible to these pervasive messages, according to Radesky. Parents and regulators have typically tried to control their exposure to such content. “It wound up being pretty surprising how many manipulative, or unethical, or inappropriate advertising approaches were employed with a child 5 or under,” she says. “This is an adult model of advertising that has been slapped onto children’s app design.”

Kids struggle to distinguish between programming and advertisements. (Though adults aren’t great at this either, with 48 percent reporting feeling deceived by sponsored content in 2015.) This is further complicated by the fact that children form parasocial relationships with characters on TV or in games. While one-sided, these bonds are real and deep. When a character like Strawberry Shortcake asks a kindergartener to buy something, that child feels a peculiar kind of pressure, according to Radesky. It can parallel the guilt or frustration of disappointing a friend or family member. “That’s not an appropriate usage of the character’s power of the child,” she says.

Tactics like “host-selling,” where characters in a show also sell products during a commercial break, have been strictly regulated in TV, to create better boundaries between core content and sales. But in gaming apps, protecting kids from such conflict is harder. “It’s mostly an unregulated space,” Radesky says. The main federal regulation that might apply—the Children’s Online Privacy Protection Act of 1998, or COPPA—is mostly focused on children’s privacy, not sales tactics.

And because apps are often personal experiences on handheld devices, its difficult for adults in the room to assess the quality of a game. Radesky nurses real disdain for the way Strawberry Shortcake Bake Shop and Barbie Magical Fashion contrive to take a kid’s money. But parents are largely out of the loop—at least until Junior starts asking for their credit card number.

Even if advertisements were banned from children’s gaming experiences, conducting this kind of research has made Radesky skeptical of children’s gaming in other ways. Not only is the monetization scheme for children’s apps ripped right from adult games, but a certain kind of near-sighted, advancement-minded design is, too. Most of these digital experiences center around meeting a narrow set of objectives. Players are there to collect coins (or, rather, Barbie shoes and blueberry smoothies) and level up fast.

The limitations are frustrating to experts in child psychology and development. “It is annoying to me, in my line of work, to see so many apps that reduce play to a few contrived options,” Radesky says. But she’s hopeful for the future, and notes that some game designers—especially those promoting paid apps that don’t rely on in-app advertising schemes—are already doing it right. Toca Boca, a Canadian-owned Swedish operation that makes digital toys for kids aged 6 to 9, is one of the few companies to earn Radesky’s praise.

Caroline Ingeborn, president of Toca Boca, says the company’s success lies in “acknowledging kids are not small adults.” Employees do intensive research on children’s “play patterns” to determine not just what they like to do with their time, but why. Years ago, Ingeborn says, they were interested in building a digital bakery, but found that kids most enjoyed the tactile experience of playing with dough. Feeling they couldn’t satisfy that urge with existing technology, they elected to focus on other games that could translate from the “physical to the digital toy shelf.”

Of course, Toca Boca is a company, and its bottom line matters. Ingeborn says they’ve been able to thrive on the initial app store purchase. Games ring up at $3.99 and are free of ads, save for phone-corner promotions of the company’s other games. But the creators soon plans to connect every existing app into one universe, Toca Life: World.

The centralized app, which will feature more than 50 locations and 300 characters, will offer in-app purchases, a first for the company. The design team has decided to concentrate all of the transactions in one physical space within the gaming universe: an explicit storefront that requires parental permission to use. Whether it works for parents, pediatricians, and, most importantly, kids, remains to be seen. But, Ingeborn says, they worked hard to prevent ads from disrupting the child’s play experience—because “that, for us, is a broken toy.”

Radesky’s findings inspired the Campaign for a Commercial Free Childhood, Center for Digital Democracy, and a number of other signatories to issue a letter to the Federal Trade Commission, asking for a review of the children’s gaming market. Legislation is a long game; even if the FTC does act, an investigation will take years, and passing a law many more. But Radesky hopes her research can start making a difference today, by holding game designers accountable and keeping parents informed.