The physics of dandelion dispersal could inspire windborne microdrones. 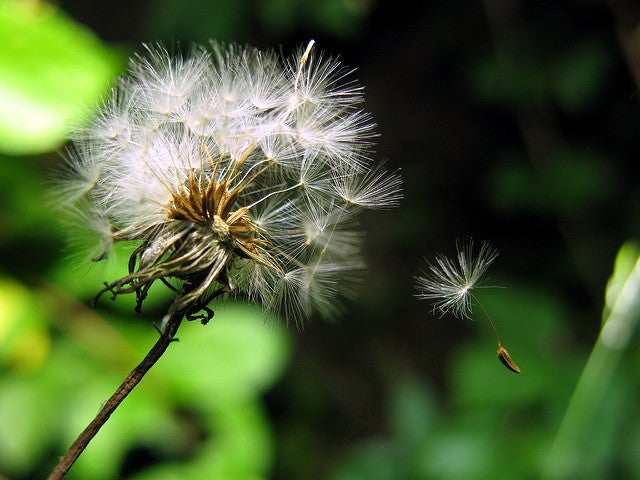 Dandelions and their relatives are pretty seasoned voyagers. Their seeds can sometimes travel 100 miles on the wind, and even drift over the sea to repopulate islands decimated by volcanoes.

“They can achieve such incredible distances with no energy consumption,” says Cathal Cummins, an applied mathematician at the University of Edinburgh in Scotland. He’s investigating how dandelions manage the meandering flights. Eventually these insights could be used to design tiny drones that ride the wind.

When a dandelion seed takes flight, its downy fluff serves as a tiny parachute to carry it on the breeze. These parachutes are very different from the ones we use. In fact, they are 90 percent empty space. “Why would nature choose such a porous design for a parachute?” Cummins says. He and his colleagues have found that the dandelion’s bristles work together to create a vortex above the seed that keeps it aloft.

Staying airborne as long as possible gives dandelion seeds a better chance of being picked up by a gust of wind and carried to new territory. Like human parachuters, dandelion seeds rely on drag to slow their descent. “Ordinarily drag is a bad thing for flight, but when you jump from an airplane you want as much drag as possible to support your weight,” Cummins says.

But dandelions must play by different rules. “These seeds we’re talking [about are] a fraction of a milligram, so the forces and the weights involved are so much smaller,” Cummins says.

To observe the seeds in action, he and his team built a wind tunnel that blew air gently upwards. As the dandelions hovered in place, the researchers tracked their movements. They saw that the porous nature of the parachute actually helps keep the seed steady as it flies. “By letting a little bit of air through the parachute, it stabilizes that vortex in its wake,” Cummins says.

The vortex follows the seed like a little halo. This mass of whirling air helps increase the drag on the seed, and is created when neighboring filaments on the seed interact with each other as it floats along.

At this scale, the dandelion parachute actually worked better than a solid canopy. “We found that they were much more effective at creating drag than a conventional parachute,” Cummins says. “The dandelion has managed to create a parachute which is virtually entirely empty space. Our research is suggesting that basically, less is more.”

Mimicking the feathery shape of the dandelion parachute could enable micro air vehicles to fly without consuming any power. These windborne microdrones could be used to track atmospheric conditions on distant planets or in environments on Earth that are remote or inhospitable.

Cummins and his team reported the findings today at the annual meeting of the American Physical Society Division of Fluid Dynamics in Denver.