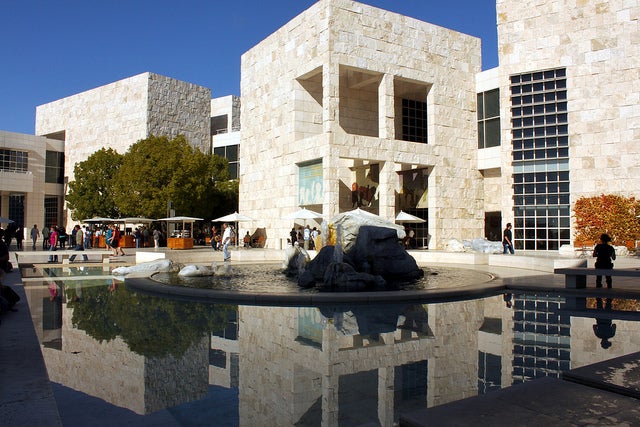 Dozens of wildfires break out in California every year, and as these pockmarked maps show they’re increasing in severity. Each voracious blaze leaves skies across the coast heavy with soot, the earth from San Francisco to San Diego scorched, and entire subdivisions in ruin.

Just as designing a house that can withstand a hurricane’s wind or water isn’t easy, building a structure that can outlast a wildfire’s lapping flames is nearly impossible. But with persistence—and money—some engineers have found a way.

The Getty Center in Los Angeles, a sprawling hilltop art museum, is one such complex. The “fire resistive” center, built between 1984 and 1997 by Richard Meier & Partners Architects for more than $700 million, relies on a mix of resilient materials, indoor fire suppression systems, and external landscaping to keep its priceless collection of European paintings and international photography safe.

Guarding against an inferno starts at the lawn’s edge, according to Michael Rogers, facilities manager at the Getty Museum. Wildfires move in complex and poorly-understood ways, but many appear to expand only with a helping hand in the form of brittle grasses and low-hanging branches.

Many plants, from flammable palm trees to fiery bougainvilla, must be excised entirely, lest they draw a floating ember’s eye. But rather than defoliate the property entirely, the Getty’s landscapers manage what they do have carefully. For example, the plentiful oak trees are trimmed regularly to ensure their canopies rise far above the earth.

Embedded beneath this garden is an extensive network of pipes. They’re connected to a 1 million-gallon water tank underneath the museum’s parking garage. Should sparks fly, as they did in the 2017 Skirball fires that touched the base of the Getty’s property, the sprinklers activate, wetting the soil and stopping the fire in its tracks. “This is the safest place the artwork could be in a situation like a wildfire,” Ron Hartwig, the center’s communication director, told CNN at the time. “While we are worried and will be until the last ember is out, we believe the art collection is in the safest place they can be.”

To ensure success in the heat of the moment, core museum staff train with the city’s fire department and test the building’s emergency response system annually.

The Getty’s fireproofing efforts continue uphill. To meet certified Type 1 fire-resistive standards, wooden building materials are eschewed. Instead, the facility’s exterior walls are made of 300,000 blocks of travertine stone, a staple of fireproof building. The roofs are covered with crushed stone. Even interior walls are cast from concrete.

The museum is also cleverly designed as a series of self-contained nodes, according to Rogers. Each node has an air pressure system that staff can dial-up in wildfire events to increase the pressure inside compared to the outside air, thus preventing smoke from seeping into the building. The entire facility is outfitted with a sprinkler system, too. But water can be just as damaging to artwork as fire, so pipes are kept dry until there’s an emergency, according to the New York Times.

If fire does manage to enter into one room—against all odds—it still wouldn’t be able to move into the next gallery thanks to automatic fire doors, which seal each distinct space off from adjacent smoke and flame. “We like to think of our buildings in terms of compartmentalization,” Roger says.

What this means for you

Most homeowners won’t be in a position to imitate the Getty. Even if a house meets building codes, it probably doesn’t have its own enormous water tank. And where Rogers advances a central vision for maintaining the museum’s 110-acre property, dozens of people must work together to ensure their entire neighborhood is free of debris.

Still, many of the same principles at work on the Getty’s Los Angeles hilltop still apply for homeowners below. The National Fire Protection Association’s wildfire preparation guide emphasizes landscaping and careful roof maintenance. Grass should be trimmed and grasses mowed to a height of 4 inches. Windows and vents should be airtight; ⅛-inch metal mesh is recommended for capping external access to the eaves, thereby reducing the potential for floating embers to waft into your attic.

But even with these tactics in place, there’s one thing people can do that artwork can’t: evacuate.