Science Is Institutionally Sexist. Here Are 4 Ways To Help Fix It

A special issue of Nature takes up the rampant sexism in science. 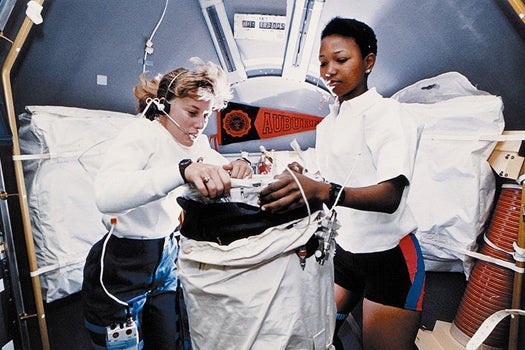 Across most industries, women are paid on average significantly less than men, and science is no exception. In 2008, the median salary for women in science and engineering was $60,000, a full $24,000 less than the equivalent male salary.

And as much as it sucks that women make less than men, this is symptomatic of an even larger problem within the sciences: an institutionalized sexism that prevents women from achieving as much similarly qualified men.

As the introduction to Nature’s awesome special issue this week on the topic puts it:

According to the White House’s Office of Science and Technology Policy, women in STEM (science, technology, engineering and mathematics) careers experience a smaller wage gap in relation to their male colleagues than women in non-STEM fields. That’s less reassuring after playing with Nature’s fun-to-fiddle-with but depressing interactive graphic quantifying the scientific gender gap. (Augh, lady friends, careful — numbers are scary!)

You can choose to narrow the data by various scientific fields, ages and types of degrees, but the gap persists. On the bright side, if you’re a female computer and information scientist under 29, your median annual salary will only fall a $1,000 short of your male colleagues’ — unless you’re comparing master’s degrees holders, in which case the gap widens to $9,000 a year. For psychologists and biological life scientists under 29, women actually make a little more than men.

Of course, salary isn’t the only marker of how science has remained a boys club, and differences in pay aren’t necessarily the result of overt discrimination. Women disproportionately drop out of scientific careers early on, possibly because of the demands of raising a family, a lack of female role models and a perception that these careers are “not for them,” as Hannah Valantine, dean of leadership and diversity at the Stanford School of Medicine, says.

Despite the fact that almost half the doctorates in science engineering the U.S. and Europe go to women, only about a fifth of full professors are female. There’s also the lack of women invited to speak at conferences, the lack of women on high-level committees, and the lack of women serving on corporate scientific advisory boards.

So how do we fix it? Eight experts from around the world weighed in on the best ways to zip the gender gap shut in Nature’s Comment section. From beyond the paywall, here are a few of the ones we can all take to heart:

Pay attention to what’s not happening:

Liisa Husu, a gender studies professor at Örebro University in Sweden, brings up the point that outright discrimination and belittlement aren’t the only reasons for a Petri-dish glass ceiling. It’s also what we’re not doing:

Non-events are about not being seen, heard, supported, encouraged, taken into account, validated, invited, included, welcomed, greeted or simply asked along. They are a powerful way to subtly discourage, sideline or exclude women from science. A single non-event — for example, failing to cite a relevant report from a female colleague — might seem almost harmless. But the accumulation of such slights over time can have a deep impact.

Invite women to speak at conferences and events:

As Virginia Valian, a psychologist at Hunter College and City University of New York, points out, it’s rare to see women giving plenary or keynote speeches at scientific conferences. Some organizations strive to bring speakers from non English-speaking countries to diversify their lineup. The same should go for women:

For one, organizers should seek out women in relevant fields to speak at conferences — and keep looking if the first woman they ask says no. Other examples include extending invitations early so that women have time to make arrangements, and offering child-care services at meeting sites.

Child-rearing responsibilities still affect women more than men. Ben Barres, a neurobiologist at Stanford University, says we can encourage more women to choose tenure-track jobs by granting extensions to scientists who have babies, whether that’s during their graduate or postdoc training or as an assistant professor:

I propose that universities modify their tenure-clock extension rules to cover children born at any stage in a career. So even if people already have children when starting out as assistant professors, they should be offered an additional year per child (up to two children, perhaps) to obtain tenure.

Jo Handelsman and Corinne Moss-Racusin of Yale University published a study in 2012 showing that scientists of all ranks and genders were complicit in gender discrimination. It found that a male candidate is more likely to be hired (and paid more) and mentored than a female. A little diversity training couldn’t hurt, and, failing that, “we could paint murals of admired female scientists throughout the halls of universities,” Handelsman and Moss-Racusin write. Yes.

Scientists have agreed on standards and training to ensure proper treatment of animal and human research subjects. The people doing the research are just as important. Striving for equality should be a core aspect of being a scientist.