The Alpha Magnetic Spectrometer's first results could be evidence of dark matter. Right in Earth’s neighborhood, space is positively bubbling with high-energy antimatter particles–a lot more than can be explained. These excess positrons–mirror opposites of negatively charged electrons–just might be signals of dark matter.

They might not be, though, and right now scientists are not sure. But the news of excess positrons is still good news from the Alpha Magnetic Spectrometer, one of the largest and most expensive physics experiments in history. From its post on the International Space Station, flying some 220 miles above Earth, the AMS could be on the verge of helping cosmologists explain what dark matter is made of.

Right now, the best news that the $2(ish) billion AMS works, and that it’s settled the question of whether there really is an excess of these positrons. Its first results were announced in a seminar at CERN, near Geneva. Samuel Ting, its 77-year-old investigator and the main reason AMS exists, is publishing the data explaining these “new physical phenomena” in Physical Review Letters.

“This experiment is the first to probe in detail the nature of this excess. We have observed many new phenomenon, and soon, the origin of it will be understood,” he told the seminar.

Since it was perched on the ISS in May 2011, delivered by space shuttle Endeavour, the AMS has spotted 30 billion cosmic rays. It has been weighing the ratio of positrons to regular electrons, which could be a way to detect dark matter. Lots of high-energy electrons are expected–those are the same cosmic rays bombarding Earth and the rest of the solar system from exploding stars and other sources. Positrons are more rare, though. Yet as AMS goes up the scale of cosmic ray energies, more and more positrons show up.

Previous experiments saw a similar excess, but couldn’t prove it for sure, and couldn’t prove what it meant. One was called Payload for Antimatter Matter Exploration and Light-nuclei Astrophysics (PAMELA) and the other is NASA’s Fermi telescope, which measures gamma rays. Now that AMS has verified the excess, that means scientists could be on the right track.

“Theorists will have a good time to play around with this data,” Ting told his colleagues at CERN.

Physicists think dark matter could consist of something called WIMPs, which stands for weakly interacting massive particles. When two WIMPs bump into each other, they destroy each other, and the result is an electron-positron pair. The mass of those particles is related to the size of the WIMP in question. That’s also related to its energy. So seeing positrons around a certain energy range might, might be a sign of these dark matter annihilations, and a telltale sign of its presence in our local section of the universe.

The problem is, positrons can come from other sources, too. Pulsars can spew them as they whip around in super-fast rotation. So seeing extra positrons is not necessarily a eureka moment for dark matter hunters.

AMS may provide insights into other mysteries of matter, too. From a mathematical point of view, nothing should exist, because matter and antimatter should have zeroed out after the Big Bang. They didn’t, and now everything in the universe exists–but why? The AMS can detect exotic particles, from neutralinos to strangelets, that could help answer these questions.

Ting has spent decades fighting to build AMS and get it into orbit. It was almost scuttled after the 2003 Columbia disaster, but he lobbied Congress to require NASA to launch it. In his PowerPoint presentation, he showed photos of lawmakers including former Sen. Ben Nelson, D-Nebraska, touring the detector’s construction facilities. His paper acknowledges several members of Congress.

The instrument itself is a major achievement, with some of the most sensitive electronics and arguably the most precise instrumentation ever lofted to space. No one has ever really nailed down a price tag, but it cost somewhere between $1.2 and $2 billion. The 7-ton instrument works somewhat like the particle accelerators at CERN, with a cryogenically cooled permanent magnet that bends incoming particles. The way they bend reveals their charge and their nature. It is full of xenon and contains incredibly precisely aligned tubes–so much so that Ting verified their structure with medical equipment.

“I put them in the hospital, like a patient, and I gave them a CT scan,” he said. “Remember, it took us nearly 18 years to produce these results.” 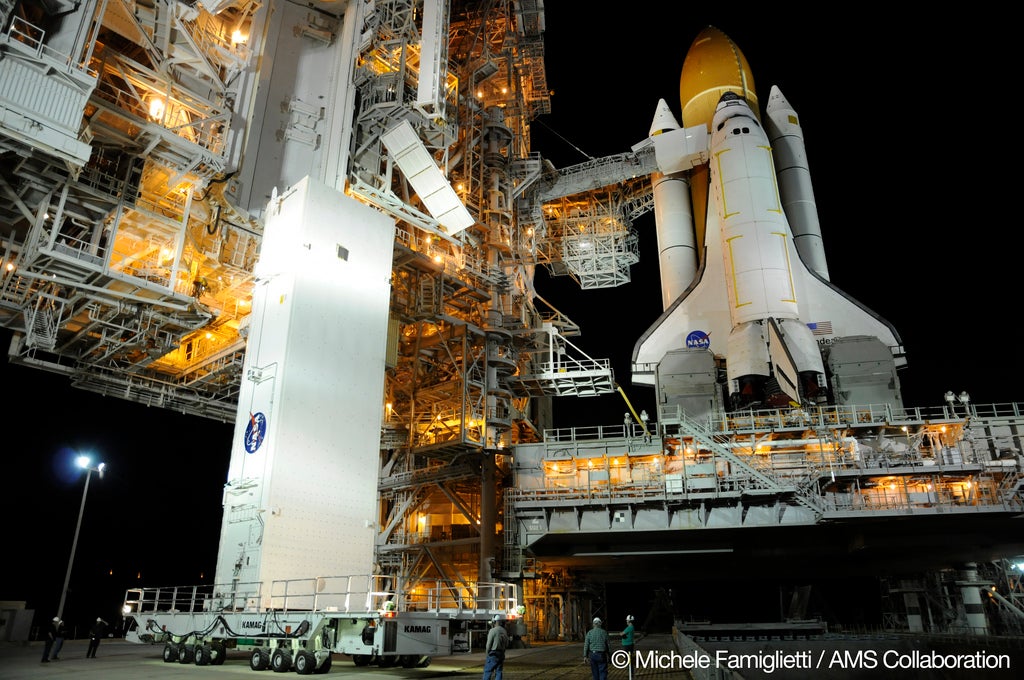