Scientists Put A Working Eyeball On A Tadpole’s Tail

It turns out we seriously underestimated the central nervous system. 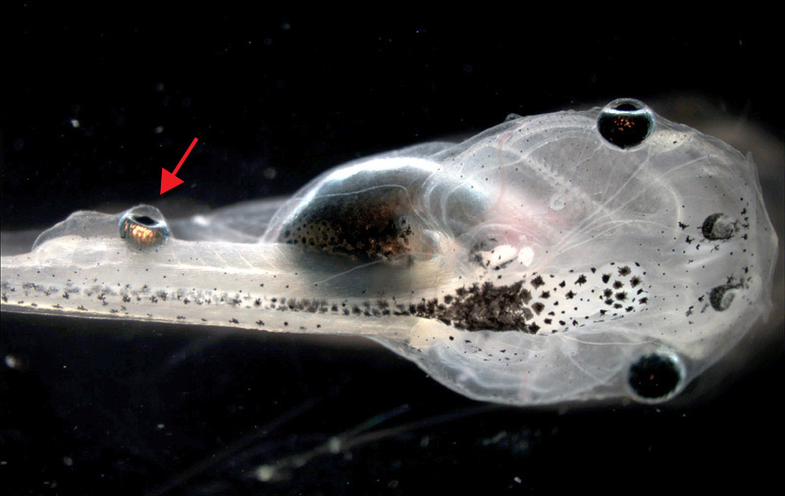 It’s hard to say what’s crazier: the fact that Tufts University researchers spent a year cutting out the tiny eyeballs of tadpole embryos and sticking them back on to the tadpoles’ tails, or: the fact that, when they hatched, a few of the tadpoles COULD ACTUALLY SEE OUT OF THE EYES ON THEIR TAILS.

As you know, this is not the way vision is supposed to work–your eyeballs are supposed to be connected to a big fat nerve that carries incoming signals back to your brain, which combines the information from both your eyes into a 3D picture of the world in front of you. Without that direct link to the brain, your eyeballs are useless.

At least, that’s the way scientists have thought about it for the last several centuries. But over the past few decades, experiments in animals and humans have repeatedly shown that the central nervous system–including the brain and spinal cord–is a lot more flexible and adaptable than people used to think it was. If one part of the brain gets damaged, for instance, the information that used to flow to the damaged sector is often re-routed, and another part of the brain takes on the job of processing it.

So these newer findings got the Tufts University researchers wondering: could the optic nerve really be the only route for incoming visual signals? And could a different part of the nervous system, like the nerves further down the spinal cord, process those signals on their own, without help from the brain?

Tadpoles, they realized, would be a good way to test this question: they would perform surgery at a time when the tadpoles were still developing, so that the transplanted eyes would have time to put down nerve roots that could potentially hook up to the rest of the tadpoles’ nervous systems.

The surgeries were painstaking, but the researchers were able to successfully graft eyeballs onto the tails of over 200 tadpole embryos:

Tadpole Eye Transplant, Before and After

Image F, on the left, shows a tadpole embryo with both its native eyes and a donor eye embedded in its tail (white arrows); Image G, on right, shows a blinded tadpole with a donor eye in its tail.

When the altered tadpoles hatched, the researchers went to work testing their subjects’ vision. Here’s the Journal of Experimental Biology’s description of the experiment:

They placed their amphibious subjects in a well where half of the dish was illuminated with red light and the other half with blue light, which they inverted at regular intervals. During training sessions, whenever the tadpoles ventured into areas bathed in red light they received a little warning zap of electricity. After a break the tadpoles were tested to see whether they had learnt to associate the red light with electrical punishment and whether they would stick to the blue side of the dish.

While the blind tadpoles never developed a preference for one side of the dish or the other, seven of the tadpoles with transplanted eyes learned to stay in the blue light, demonstrating that they could see through their grafted eyes.

The question was, why only seven?

The answer turned out to have something to do with how the donor eyes sprouted nerves after the transplants. Since they’d labeled the donor eyes with red fluorescent protein, the researchers were able to image the tadpoles and compare the growth of their nerves. In half the subjects, the nerves hadn’t grown at all, and in about a quarter of the others, the nerves had grown, but they’d ended up in the tadpoles’ stomachs: 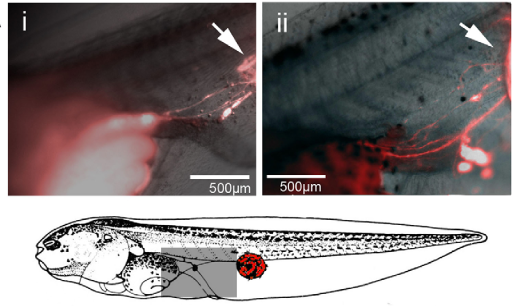 White arrows show the location of the transplanted eye, and the nerves show up in red, tracing the path to the stomach.

But in the other quarter of the subjects–31 tadpoles in total–the nerves extended all the way to the animals’ spinal cords; six of the seven seeing tadpoles belonged to this group: 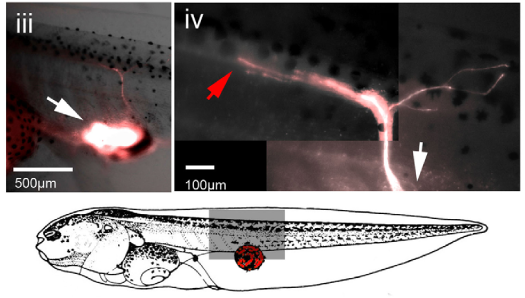 White arrows show location of eye. In the image on left, you can see that the eye’s nerves end after reaching the spinal cord (in other words, they don’t make it all the way to the brain).

The researchers’ findings seem to indicate that the neurons in the spinal cord are capable of doing at least some of the tasks as the brain. If that’s true, scientists could someday exploit the spinal cord’s smarts for a number of medical treatments, like restoring movement to paralyzed limbs.