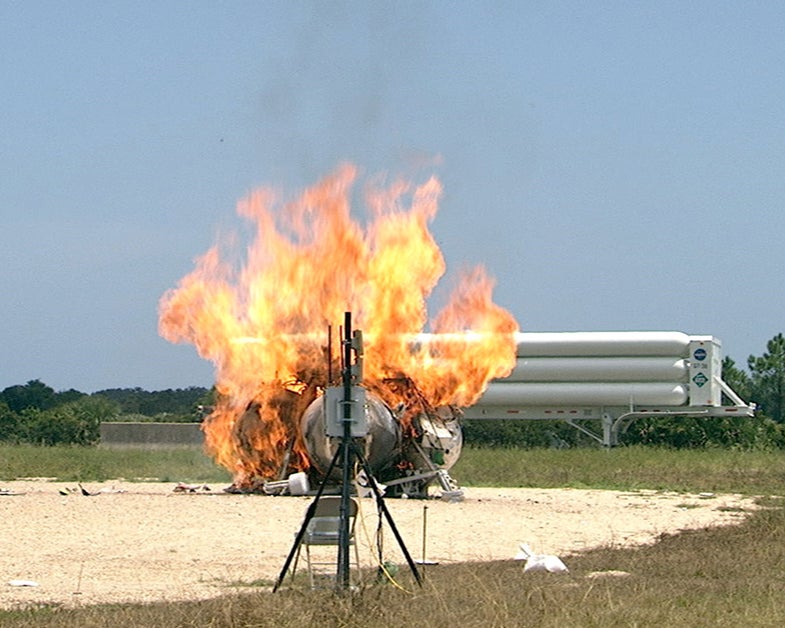 Space exploration doesn’t always go smoothly. For instance, the triumph of Apollo 11 was followed by the failed mission and near-disaster of Apollo 13. Prior to launching Alan Shepard into space in 1961, NASA blew countless space rockets to pieces on the launchpad. Russia still crashes its spaceships periodically. And lest last week’s euphoria over the Mars rover Curiosity landing have you thinking NASA’s got this spaceflight thing down to a pure science, please see the video below. Late last week, NASA’s experimental unmanned Morpheus lander failed spectacularly during vehicle tests. Really spectacularly. With fire and explosions and whatnot.

Morpheus is designed for lunar exploration, though NASA acknowledges that it could–with some modifications–be reconfigured for asteroid exploration as well. It is powered by liquid oxygen and methane propellant jets that allow it to hover and make soft landings, which would allow it to deliver more than 1,000 pounds safely to the moon’s surface.

And maybe some future Morpheus lander will do exactly that. The one making its first untethered free-flight in the video below, as you will see, is now toast. But while the test vehicle smolders, the program itself is still very much alive, if set back by 20 flight tests and many, many months. NASA and its partner Armadillo Aerospace have already begun work on a second vehicle that could be ready for tests early next year.