FYI: Does Thinking Too Hard Wear You Out?

If it does, it's all in your head. 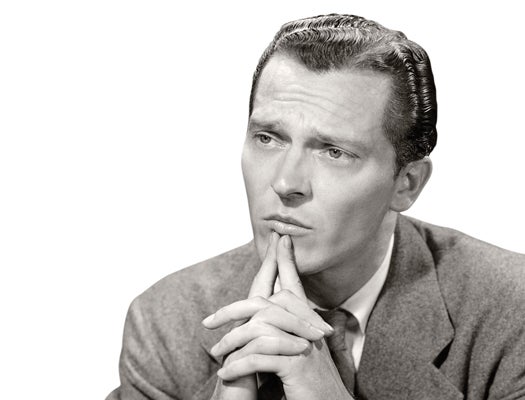 The brain makes up about 1⁄50 of our body weight but consumes about one fifth of the oxygen we breathe. It’s natural to assume that overtaxing the cerebrum would leave one feeling lethargic, but that’s not quite true. The brain uses most of its energy just to maintain its baseline state; one tenth of our energy at rest goes to pumping sodium and potassium ions across brain-cell membranes, a simple process that keeps each neuron charged and ready. Specific mental activity, whether chatting with a friend or doing a crossword, does not suck up much extra energy.

That said, studies show that people do slow down after performing taxing mental tasks. One experiment, conducted by Samuele Marcora of the University of Kent, split subjects into two groups. Members of the first played a mentally challenging computer game. Those in the second group watched a documentary about trains or sports cars. Then everyone took an endurance test on an exercise bike. Marcora found that people who were “mentally exhausted” gave up pedaling more quickly than the documentary-watching controls. It was as if the heavy thinking had worn them out.

At the same time, Marcora found no correlation between the mental task and measures of their cardiovascular response, such as blood pressure, oxygen consumption, or cardiac output. In other words, the mental workout didn’t seem to slow their bodies so much as it appeared to skew their perception of how hard a given physical task might be.