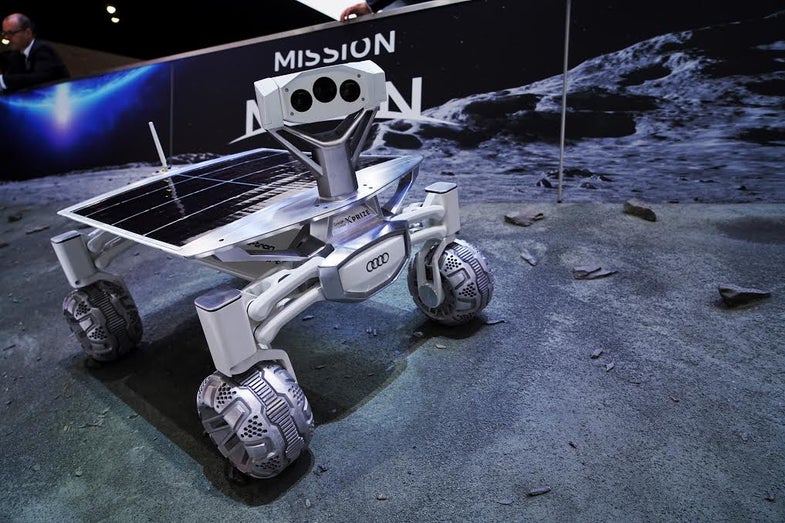 Tucked into a corner of Audi’s expansive booth at the North American International Auto Show in Detroit this week sat a little piece of hardcore astronomical research—a pint-sized lunar rover. Compared to the massive hunks of aluminum, steel and carbon fiber that surrounded it, the little ‘bot looked like a fragile toy. In truth, of course, it’ll leave those brutish earthbound guys eating its lunar dust.

The four-wheeled Audi Lunar Quattro—rocking the carmaker’s familiar four-ring logo right on its grill—is the work of a German team called Part-Time Scientists (PTS), which created the machine as their entry into the Google Lunar XPrize. This competition challenges private teams to build, launch, and land a rover on the Moon, and then traverse 500 meters of the dusty lunar surface while shooting back photographic evidence of the feat. It’ll be an Instagram for the ages—and a $30 million bounty for the first team to do it.

Scoring formal backing by Audi has helped PTS innovate its way to its anticipated launch in 2017, says team leader Robert Böhme who proudly showed off his group’s progeny amid the hubbub of the car show’s press day.

Specifically, Audi helped the team develop its all-wheel-drive setup—that’s clutch while off-roading on the Moon, of course—but it also contributed 3D-printing technology that enabled the engineers to build their rover out of aluminum and titanium to save weight, yet with whatever configuration they desired. For instance, they were able to include with interior cable channels that would be impossible to create via traditional CNC milling techniques. Böhme hands me a wheel to demonstrate. It has structural elements embedded within it, yet plenty of open space to keep weight down. “It’s much lighter than our first versions, and we’re able to design and shape it any way we want,” he explains.

PTS will likely contract with a Russian or Indian rocket for the launch. The full lander—which the team must also design and build—will resemble the Apollo lander, with four legs and a roughly cubic body. Two rovers slung underneath will be lowered to the surface for exploration.

PTS’s goal isn’t just to win the XPrize, but to actually study the surface, as well, with an eye toward future exploration and excavation of minerals for construction of roads and structures. The team also plans on traveling to the Lunar Roving Vehicle (LRV) at the site of the Apollo 18 landing, just under 2 miles from PTS’s own anticipated landing site. There, they’ll be able to study how materials have aged after more than 40 years on the surface.

“The Apollo 17 LRV is of particular interest to us because it wasn’t made from the same high-tech materials NASA used on the lander,” Böhme says. “It was made using things like piano wire and plastic, so it will be interesting to see how that has all held up. Of course it’s an historic site, so we will be respectful of that, as well.”