Video: Motivating Robot Follows You on Your Morning Run

Same old jogging routine got you bored? Can’t move your leaden legs faster than a 15-minute mile? Turn into a... 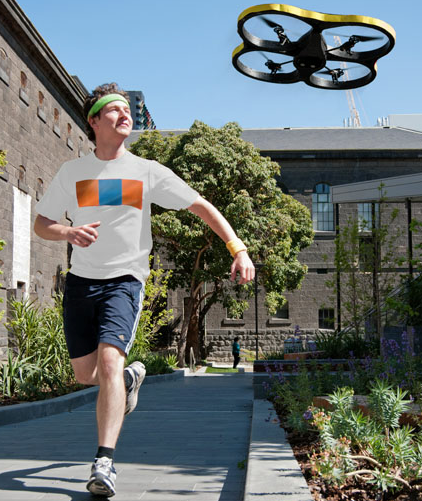 Same old jogging routine got you bored? Can’t move your leaden legs faster than a 15-minute mile? Turn into a juggernaut with Joggobot, a hovercraft that will fly above your head and motivate you to run faster.

The bot is a modified Parrot AR.Drone, programmed to follow a fashionable orange and blue running T-shirt. Cameras on the drone are programmed to watch the pattern and hover about three and a half feet off the ground. If it loses sight of the pattern, the drone lands automatically.

Eberhard Gräther and Floyd Mueller of the Exertion Games Lab at the Royal Melbourne Institute of Technology in Australia built the software to modify the drone. They plan to study human-robot interaction regarding exercise, and they believe runners might use systems like this in a variety of ways. It could be programmed to fly a certain distance ahead of a runner and at a certain speed, setting a pace for training runs. Or it could fly alongside or in front no matter the runner’s speed.

“Should the robot be a pacemaker for the jogger? If so, can this be motivating? Or should the Joggobot be more like a dog, reacting to the jogger like a companion?” they write on their website. The drone’s chosen actions will affect the jogger’s experience in different ways, and could “further the experience of jogging,” the team says.