Video: How to Fold the Longest-Flying Paper Airplanes 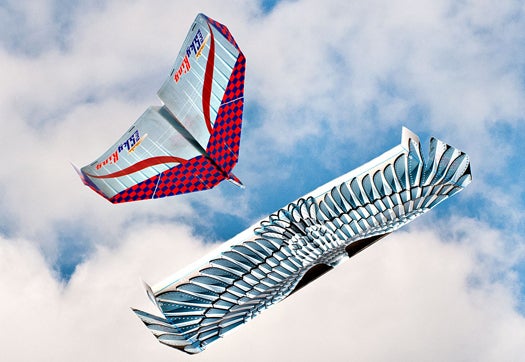 There are lots of way to learn first-hand the principles of flight, but most of them require years of studying or a pilot’s license. There is, however, an exception: folding paper airplanes. Da Vinci did it, as did the Wright Brothers and Jack Northrop, and if it’s good enough for them, it’s good enough for us. So we enlisted two master paper-plane folders, Takuo Toda (current Guinness record holder for the longest timed paper aircraft flight of 27.9 seconds) and Ken Blackburn (a former record holder and engineer at Florida’s Eglin Air Force Base), to show us their best cracks at making a long-flying plane out of a sheet of super-light magazine paper.

When we asked Blackburn to design a custom paper plane, we couldn’t have imagined he’d come back with what he did. As a lifelong student of aeronautical engineering, Blackburn knew something we didn’t: a paper plane doesn’t necessarily have to look like a real plane—with a nose, two wings, and a tail—in order to stay aloft for a long time.

The Blackburn Popular Science 1 (BPS1) is a single-wing glider, designed to float gently from a slow, lofted launch. “This,” Blackburn says, “is what the world-record plane would look like if [Guinness] didn’t need the 60mph throw at the start of the flight,” Though a folded BPS1 looks simple, every fold, fin and flap is integral to maximizing flight time. So let’s start with the front of the plane and work our way back:

The front end of the BPS1 sets up the balance of the whole gilder. The frontmost edge of wing is folded to move than five times the thickness of single sheet of paper; “For rectangular flying wings, the balance point needs to be no further aft than one-quarter the distance from the front to the back edge,” Blackburn explains. “If an airplane is too tail-heavy, it becomes unstable.”

Blackburn created four separate wing tips on the BPS1. The forwardmost pair are angled up slightly to provide lateral stability and prevent the BPS1 from going into diving into a spiral. The rear pair are perfectly vertical, keep the glider flying straight; if you want the glider to turn, manipulating the angle of these fins will do the trick.

Finally, the subtle lip on the back edge of the wing stops the structure from taking a nose-dive. “Try flying it without bending this area up,” jokes Blackburn, “and see what it does.”

Toda’s plane, by comparison, looked pretty much how we expected an over-engineered paper airplane to be. His design, the Hyper Sky King, is a modification of the record-setting Sky King model. Toda focused his attention on setting more weight at the front of the plane, similar to how Blackburn did; he did so by widening the nose of the plane and doubling up its thickness with a few intricate folds at the tip.

In the end, both design strategies netted planes with similar flight times. But we did learn one more important thing about tossing paper planes: making a perfectly aerodynamic craft is one thing, but without a solid, straight throw, you’re sunk.

Here’s how to make the planes. For those with a copy of the May issue of Popular Science, you guys can turn to page 64 and follow the instructions. If not, we’ve provided some PDFs below that you can print out yourself. It might take some work–they have to be printed double-sided, with everything properly lined up–but it’s possible. To ease that process along, here are some diagrams to go along with the video tutorial above.

Make sure to line up the eagle on both sides of the sheet–if you reverse the sheet, the eagles should be back-to-back.