A Pet Drone That Follows You Like A Lost Puppy [Video]

This autonomous flying servant can track and record you from the sky. 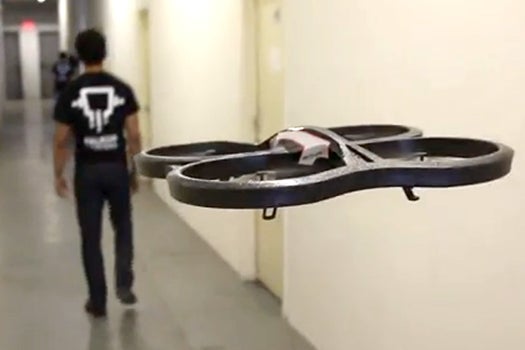 Drones can’t fetch a taco for you, but they can lift cameras into the sky and return impressive aerial video and photography. Trouble is, today’s flying machines require a human pilot to manipulate their complex controls.

Sameer Parekh wants do away with remotes and have intelligent drones simply do his bidding. So he quit his day job as a Wall Street quant and launched an autonomous flying robot company, called Falkor Systems. (Note: It recently merged with I Heart Engineering, a company that builds and sells open-source robotics products.)

Parekh’s early Pet AR.Drone prototype uses artificial intelligence algorithms to track a person, follow him or her around from a safe distance, and film the journey.

In the video below, the drone is trained to follow a graphic on a T-shirt. Within the next few years, however, Parekh hopes to refine his intelligent drone software and hardware enough to sell them to extreme athletes, such as BASE jumpers. “They’ll be able to track [them] autonomously as they jump off the cliff,” he says.

We stepped inside Parekh’s Brooklyn, New York workshop to get an early look at the future — one in which flying drones may be commonplace enough to be pets. And maybe fetch that taco.