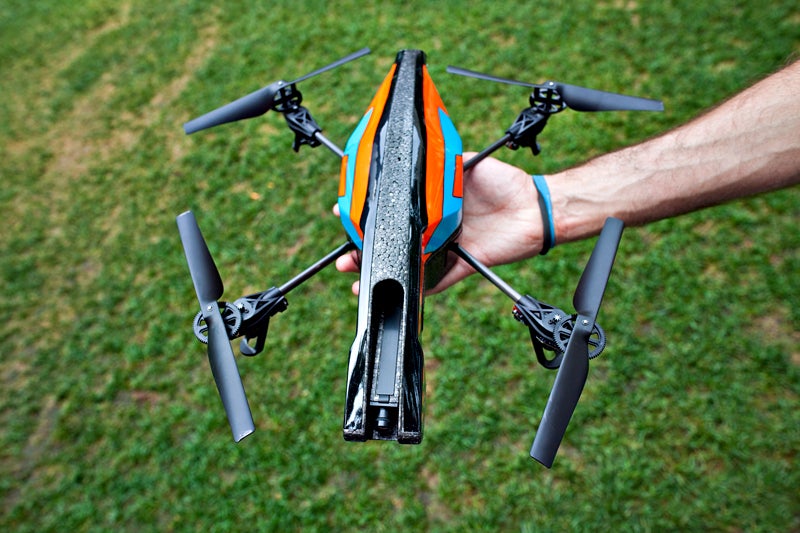 After enthusiastically covering the debut of Parrot at the Consumer Electronics Show back in 2010, PopSci went on to honor the camera-equipped, remotely-piloted quadrotor with a Best of What’s New distinction. And so with that in mind I unboxed the newest iteration–properly named AR.Drone 2.0–prepared for some degree of disappointment. Second-generation products, as often as not, tend to correct flaws in the first generation and marginally refresh or update certain features (now with HD camera!) without drastically improving or reinventing the core product or experience. I approached Parrot’s newest drone accordingly.

This was a misjudgment. That’s not to say the AR.Drone 2.0 is a completely re-imagined concept–the aerial vehicle itself is essentially the same–but the latest version has taken several significant technological strides forward, packing a stronger suite of sensor technology and improved hardware that make piloting the quadcopter an order of magnitude more intuitive (and a whole lot of fun).

WHAT’S NEW
Outwardly the AR.Drone 2.0 is still the same quadcopter, bearing a few minor aesthetic changes. The significant upgrades are all interior. A new pressure sensor helps keep the AR.Drone 2.0 vertically stable at altitudes as high as 164 feet (the first-gen drone’s ultrasound sensors maintained stability only up to about 20 feet). A 3-axis magnetometer joins the 3-axis gyro and 3-axis accelerometer that were already there, making it significantly easier to pilot (more on that later). Version 2.0 also received its first built-in, automated maneuvering function–double-tap the screen of your control device (like its predecessor, the AR.Drone 2.0 is controlled via a smartphone or tablet app) and the aircraft executes a midair flip.

And, yes, the drone’s front camera can now shoot in 720p HD at 30 frames per second, which it beams right to the screen of whatever smartphone or tablet you are using to pilot, giving you a drone’s-eye view. But it now also records that footage, dumping video and still images to an on-board USB drive or to the pilot’s control device. Privacy advocates might have something to say about that, but as a feature it lends the Parrot AR.Drone 2.0 an added aspect of utility beyond simple recreation. 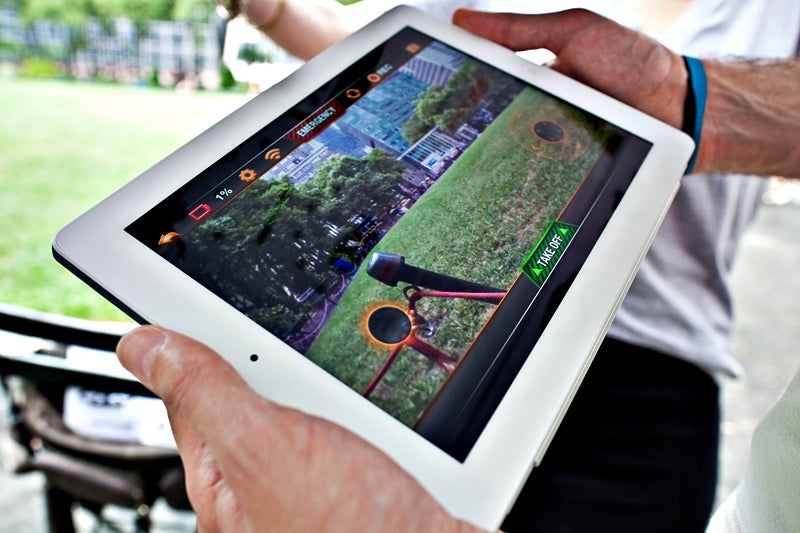 Piloting the AR.Drone via iPad

WHAT’S GOOD
Enhanced Control: As noted above, Parrot’s drones are controlled via a smartphone or tablet app (we used both an iPad and an iPhone for this review, with similar good results for each) through an interface that is in one sense remarkably intuitive and in another mildly frustrating. The drone mimics the tilt of your device, so to fly it forward you tilt your smartphone forward, and to fly right or left or backward or some combination of those, you tilt your smartphone accordingly. That’s the intuitive part. But when you rotate the drone (which is done via a touchscreen joypad within the app) to the point where you and the drone are no longer facing the same direction–let’s say the drone is facing 90 degrees to your right–all intuition dissolves immediately. Now, if you tilt your phone forward the drone travels to your right. If you tilt your phone to the right, the drone comes back toward you.

Parrot remedied the need for the pilot to be constantly compensating for the direction the drone is facing via a 3-axis magnetometer that tells the drone precisely how it is oriented respective to the control device. With the “Absolute Control” option switched on in the app’s settings, the drone flies with respect to the way the device is facing, regardless of which way the drone is facing (if you tilt your phone to the left, the drone always flies to your left regardless of whether that’s the drone’s left or not). This drastically simplifies piloting. Where version 1.0 took a period of getting used to, a user can get comfortable piloting version 2.0 virtually right out of the box.

Flight Stability: As you will see at the end of the accompanying video, there is a brief moment after takeoff during which the AR.Drone 2.0 appears a little unsteady as its sensors establish a stable hover. But the new pressure sensor really does seem to deliver–Parrot claims that the drone can steadily climb to 164 feet and remain stable in calm conditions, and while we never took it quite that high (we found that the Wi-Fi link that connects device to drone would sever before we could get up that high) we did take it up more than a few dozen feet. Wind gusts have a tendency to upend it a bit, in which case it can lose some altitude pretty precipitously, but in all cases the drone re-established a stable hover almost immediately. We only managed to crash our AR.Drone 2.0 a few times, almost exclusively indoors while negotiating obstacles and almost always due to pilot error/bravado.

Software Interface: The piloting software itself hasn’t undergone a radical transformation in the second iteration–in fact, the software used to pilot 1.0 doesn’t isn’t supported anymore, so if you own a AR.Drone version 1.0, you now use the new 2.0 software to pilot both versions. But there are some handy features embedded in the app that make it easy to share your videos straight to YouTube (you can actually log into Google/YouTube/Picasa through the app and dump your flight videos or pics right to your media channels) or to connect with other pilots through the AR.Drone Academy, Parrot’s online community for AR.Drone pilots where they can easily swap photos and videos, share flight data to unlock achievements, and find other pilots flying nearby. The Academy aspect is also useful for those looking to explore the community for software hacks developed through AR.Drone’s open API.

WHAT’S BAD
Battery Life: If there’s an aspect of the refreshed Parrot AR.Drone that we found unsatisfactory, it’s the rechargeable lithium polymer battery. We can’t dock too many points here. The AR.Drone 2.0 stays aloft as long as comparable RC aircraft, and we’re sensitive to battery cost and power density issues and the challenges inherent in balancing power and weight in any aircraft of any size. It’s simply somewhat annoying that AR.Drone’s battery takes between an hour and an hour-and-a-half to fully charge, and from that we averaged 15-25 minutes of continuous flight. That’s not great, especially for a recreational machine best enjoyed outdoors away from the wall socket (though we did have a blast piloting ours through PopSci’s Manhattan cubicle farm). Parrot does offer extra batteries for $39.99 online. If you want to fly for any extended period of time, we recommend you suck it up and buy one. At least one.

No New AR Games (Yet): Part of the draw to the original AR.Drone was that it wasn’t just a remote control aircraft, but a new kind of hybrid physical/virtual gaming device. Several augmented reality games were designed, most of which were multiplayer/multi-air combat or racing games, in which AR overlays allowed users to shoot virtual missiles at each other or some such. AR.Drone 2.0 comes with no new games, the existing 1.0 games aren’t really optimized for the 2.0 (though they will be, we’re told), and there’s no word yet on whether or when Parrot will make additional games for version 2.0. But should you be so inclined, you can always design your own; as noted above, AR.Drone’s API is open and developers are encouraged to hack away.

THE PRICE
The AR.Drone 2.0 is available now and retails for $299.99. You can order online from Parrot directly, but they also can be found at Brookstone and at Barnes and Noble. Extra batteries retail from Parrot for $39.99.

THE VERDICT
Like its predecessor, the AR.Drone 2.0 is a really fun machine. Unlike its predecessor, version 2.0 requires almost no getting used to–it’s intuitively simple to fly right out of the box. The enhanced controllability enabled by the magnetometer and the “Absolute Control” feature make piloting this drone easy and extremely enjoyable. Children can fly it (with adult supervision, of course). Adults can fly it, and will enjoy it as much as children. The price, while perhaps not exactly right for every budget, is competitive in the context of higher-end model helicopters or airplanes, and where quadrotors are concerned it really doesn’t have any competition in its weight class. You can cobble together your own quadcopter from various DIY kits and the like, but you’re still going to end up paying dearly for the privilege. For a quality out-of-the-box technology at an accessible price point, Parrot is really carving out a nice little niche in the recreational drone space.

That being said, with battery life being so underwhelming it’s difficult to promise hours of free-flying fun–perhaps it’s more accurate to promise many 20-minute chunks of piloting glee. But Parrot got so many things right with this aircraft. It really is a significant improvement over the first-generation AR.Drone–which wasn’t a bad drone by any stretch. Batteries get better, and sensors and electronics get cheaper, smaller, and more efficient. I personally wouldn’t let the short battery life discourage me from taking the current AR.Drone 2.0 home from the store, but the trajectory of the product line thus far suggests to me that we’re only starting to scratch the surface of what these drones can do. I’m really more excited to see what improvements Parrot is able to pack into version 3.0.