Building a next-generation jet engine isn’t easy, but from the cool confines of a blacked out holographic chamber in Brooklyn,... 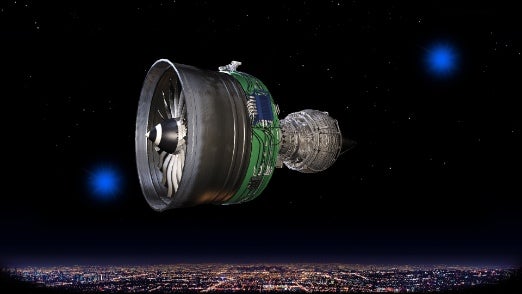 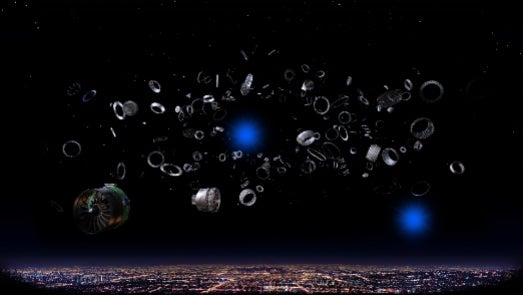 Building a next-generation jet engine isn’t easy, but from the cool confines of a blacked out holographic chamber in Brooklyn, it can at least be easier. Here, GE and its partners at BBDO New York have assembled ThrottleUp, an immersive 3-D holographic experience that lets users build one of GE’s new energy efficient GEnx jet engines using a gesture controlled holographic interface.

ThrottleUp was assembled in just three weeks from an impressive battery of technologies, including the same Musion Eyeliner projection technology that brought Tupac Shakur back to the stage for a posthumous performance at Coachella last month and a SoftKinetic sensor camera that captures the user’s hand movements. And while yes, it is basically a huge advertisement for GE, the finished product is a legitimately cool, technologically dazzling thing to see (and feel and hear).

“We wanted to show people how beautiful and amazing this engine is, but we didn’t just want to do 3-D,” says Neely Lisk, BBDO New York’s interactive producer on the project. Instead they’ve created a system that dazzles on all fronts–not just visually but sonically and texturally as well. When you step into the custom built chamber, the motion sensor puts you through two quick motions to sync itself to your body. Then the room goes black and the fun begins.

In a starry sky over a nighttime cityscape floats a disorganized cluster of real GE jet engine parts, each one slowly whirling in high-detail 3-D. Taking cues from the system, you then start to piece together the engine components using hand gestures, gathering parts into clusters that self assemble into larger pieces of the GEnx engine. You then fit the larger pieces together to produce a full working engine, which attaches to a jetliner that streaks away into the distance.

If it sounds like a simple video game, it’s not. It’s richer, more immersive, and far more technologically dazzling when you’re standing in a near pitch black space moving the world around you.

“The SoftKinetic camera ran software we licensed in order to use the camera sensors, but everything else was more or less a custom build,” Lisk says. “We were working through the night to implement new code. Setting up took hours to get the Musion film where it needed to be. Float was testing in its office in San Francisco, so there was no way for us to actually test until it was built. We kind of had to hold hands and pray that it would all work.”

Float refers to Float Hybrid Entertainment, the company that custom-developed the game engine that ran the overall experience. Effects companies LMG and Framestore delivered custom visual and sound effects that were derived from real CAD drawings of GEnx engine parts and sounds recorded from factory floors, while Musion delivered its patented projection technology that relies on a thin film stretched at a 45-degree angle toward the viewer that reflects images projected onto it from above as 3-D images–a film that had to be hung with two tons of tension to work properly. The team even contracted out a custom musical score to serve as background for the experience.

Blended together with the motion-controlled interactivity supplied by the SoftKinetic sensor array, the entire experience is as immersive as it gets and a nod to what future storytelling can be. Why watch when you can participate?

“We believe in taking storytelling to the next level,” Lisk says. “And this is something you can see and feel and touch.”

What exactly do you feel and touch? GE and BBDO didn’t leave out this sensory aspect in ThrottleUp but we don’t want to spoil the surprise ending for you, though we’re fairly sure you’ll be blown away. If you’re around the NYC area, Throttle up is free and open to the public through Friday, May 11 at 56 Water Street in Dumbo. It’s worth checking out.