A more skilled pilot than we are did some fancy flips with the redesigned AR.Drone 2.0 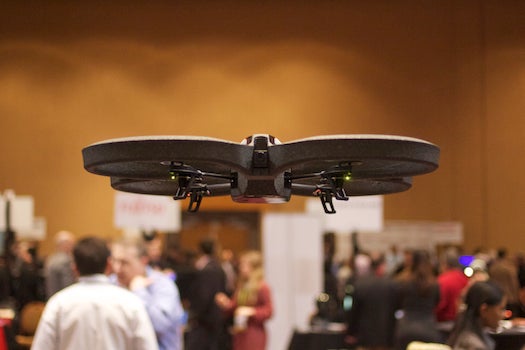 Parrot’s AR.Drone–what we suppose we should now call the AR.Drone 1.0 (spoiler alert)–won a 2010 Best of What’s New award, so we were definitely excited to see the new version here in Las Vegas, cheerfully performing flips in a crowded convention hall (video below, of course). So what’s new in version 2.0?

The AR.Drone, a small and exceedingly light quadrocopter designed for the public, to be controlled with a smartphone or tablet, has gotten a minor aesthetic redesign; some orange accents replace the silver, the styrofoam loops that surround the propellers are shaped a little differently, that kind of thing. Where’s it’s gotten a bigger upgrade is inside: it now has a high-def camera, capable of shooting in 720p, and a compass to ensure the camera always faces the right direction. And, at last, recording the video that the onboard camera shoots doesn’t require sketchy third-party apps!

It’s also got a new pressure sensor to ensure better vertical stability–seems like it works, because the Parrot rep told me that the new drone should be rock-solid stable up to 50 meters in the air, compared to the mere six meters the first version could handle.

The iPad app is also redesigned, and it’s surprisingly nice, considering the interface for the first version was sometimes less than ideal. You can very naturally watch and swipe between videos and photos you’ve taken, and there’s also something called the AR.Drone Academy, which connects you with other AR.Drone pilots in the area–you can share and see others’ stats and specs, like distance traveled, altitude, and speed, and share videos. It’s also nicely easy to upload videos to YouTube or photos to Picasa.