Video: In Record-Breaking Parachuteless Skydive, Man Jumps 2,400 Feet Into a Pile of Boxes

Gary Connery broke the record today for skydiving sans parachute and also, presumably, took home a gold medal in being... 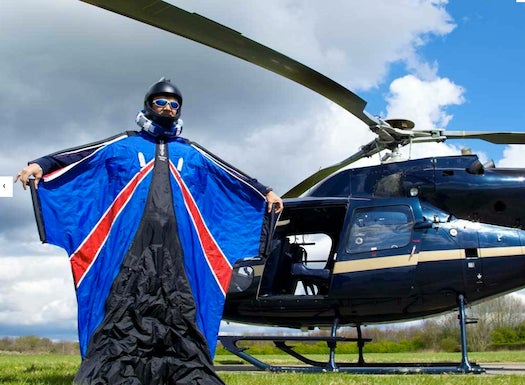 Gary Connery broke the record today for skydiving sans parachute and also, presumably, took home a gold medal in being a badass. But that wasn’t all: The 42-year-old father-stuntman-crazy-person gave Newton’s First Law one more slap in the face by diving from 2,400 feet above Buckinghamshire, England, and straight into 18,600 cardboard boxes.

Connery did it with help from a wingsuit, a la ‘Jetman’ Yves Rossy, but he still made it to speeds of 80 mph three seconds after his leap. He fell for about 30 seconds, flared his wings to slow down to the relatively bearable gliding speed of 50 mph and falling speed of 15 mph, then landed on the 12-foot-high makeshift landing strip almost a mile away.

Before the leap, Connery, a veteran of 880 sky dives and 450 base jumps, told reporters he was “a bit scared.”

And then he jumped from 2,400 feet without a parachute.

Even without breaking records, Connery already had a pretty solid resume before the jump, both professionally and recreationally. He’s jumped from the Eiffel Tower and London’s Tower Bridge, and as a stuntman he’s been in dozens of TV and movie roles, including “Batman Begins,” but also “The Beach,” which might make other people want to jump out of a plane with no parachute.