Opportunity Finds Veins of Water-Deposited Minerals on Mars, Suggesting a Wet Past

We hear about evidence for water on Mars more regularly these days, but we’re pretty sure this is the first... 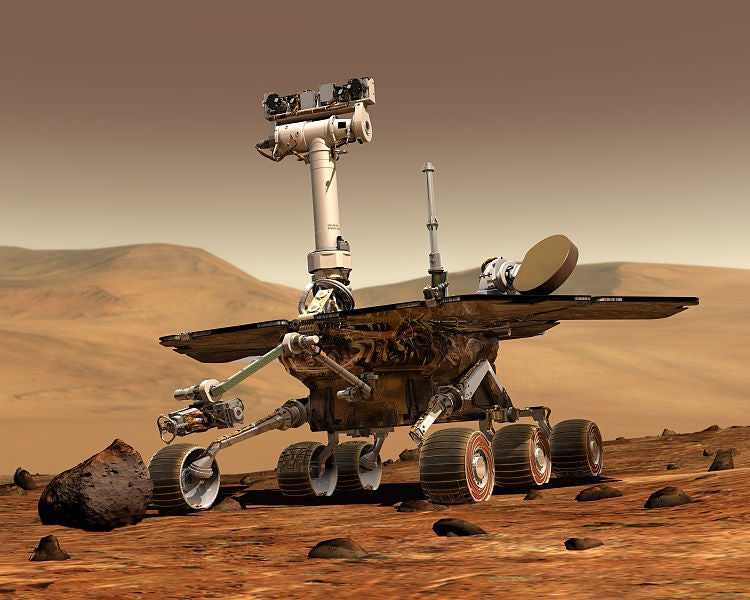 We hear about evidence for water on Mars more regularly these days, but we’re pretty sure this is the first time a discovery has been described as “slam-dunk” evidence of a wet past on the Red Planet. The rover Opportunity has found bright veins of what is probably gypsum in the rim of Mars’ Endeavour Crater that were almost certainly deposited there by water running through underground fractures in the rock, researchers say, and that points to a past Mars where liquid water was present.

“This tells a slam-dunk story that water flowed through underground fractures in the rock,” Steve Squyres of Cornell University, principal investigator for Opportunity, said in a NASA press release. “This stuff is a fairly pure chemical deposit that formed in place right where we see it. That can’t be said for other gypsum seen on Mars or for other water-related minerals Opportunity has found. It’s not uncommon on Earth, but on Mars, it’s the kind of thing that makes geologists jump out of their chairs.”

What Squyres means is that other gypsum seen on Mars previously–specifically blowing in the wind in a dune field on far northern Mars–is of indeterminate origin. Gypsum is a calcium sulfate, and calcium sulfate comes in many flavors, some hydrates and others not. But the gypsum found in the Homestake vein (as it’s now being called) has been discovered right where it formed rather than blowing in the wind. And multi-filter data from Opportunity’s Panoramic Camera as well as data from Microscopic Imager and Alpha Particle X-ray Spectrometer on the rover’s arm suggest this calcium sulfate–even if it’s not truly gypsum–is a hydrate.

That means it probably formed when water dissolved calcium out of volcanic rocks, which then combined with sulfur that was deposited there as calcium sulfate. This likely all happened in an underground fracture that has over time been exposed to the surface. And the aptly named Opportunity just happened by to notice it.

Like most Mars discoveries (and scientific discoveries in general) this one asks more questions than it answers. Why is calcium sulfate forming in the rim of this crater but not on the Martian plains? And could the volume of water that spawned this gypsum have been abundant enough to support some kind of life millions of years ago?

Opportunity will keep looking for answers now in its seventh year of service beyond the end of its original mission in 2004. The rover is bound for the sun-facing slope of the crater so its solar panels will be well positioned to weather yet another Martian winter.

More from NASA via the link below.