Mars Exploration Rover Opportunity has stumbled across a field of tiny, mysterious spheres near Mars' Endeavour Crater that are puzzling mission geologists. 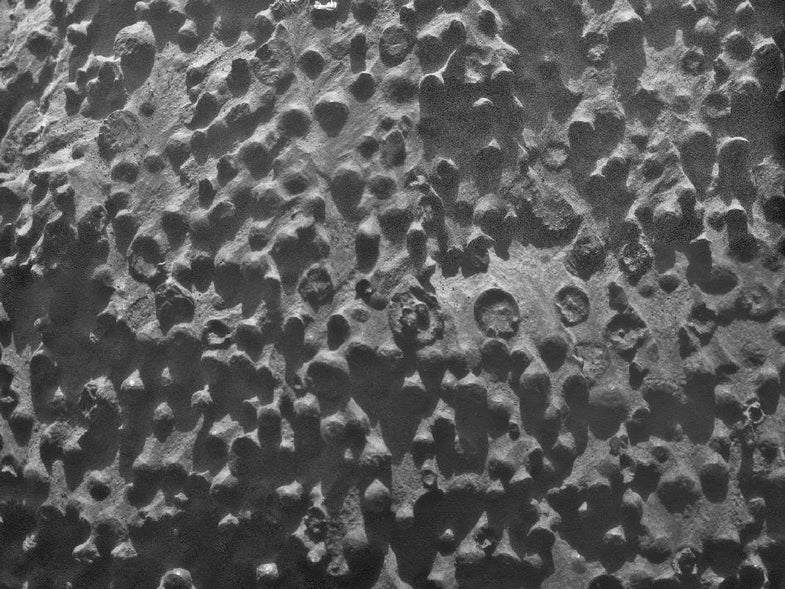 More than eight years into its mission, Mars Exploration Rover Opportunity is still sending back data and images that consistently fill us with wonder and periodically leave scientists scratching their heads. Consider the image above. Taken by Opportunity at an outcropping on the rim of Endeavour Crater known as Kirkwood, it reveals a small stretch of ground littered with tiny spheres, and geologists have no idea what they are or how they got there.

Opportunity discovered similar spherules at its landing site back in 2004, and those were a major find. Those were nicknamed “blueberries,” and researchers using Opportunity’s various tools determined that they were rich in hematite, an indicator of the presence of a wet environment at some point in the distant past. But these new spheres don’t have the same iron-rich composition as blueberries. They are somewhat similar, but definitely not the same–not in composition nor in structure and distribution.

The image above (it’s actually four images stitched together) was taken by the rover’s Microscopic Imager and covers an area only about 2.4 inches across, so these things are seriously small. But they could hold big secrets. Stay tuned as this mystery unfolds; Opportunity’s science team is currently devising the best way to use the rover’s instruments to figure out exactly what these are made of, how they got where they are, and what that means for Mars’ geological past.