With Telerobotics, Astronauts Orbit Mars While Robots Explore the Surface

Humans could avoid the dangers of landing on Mars 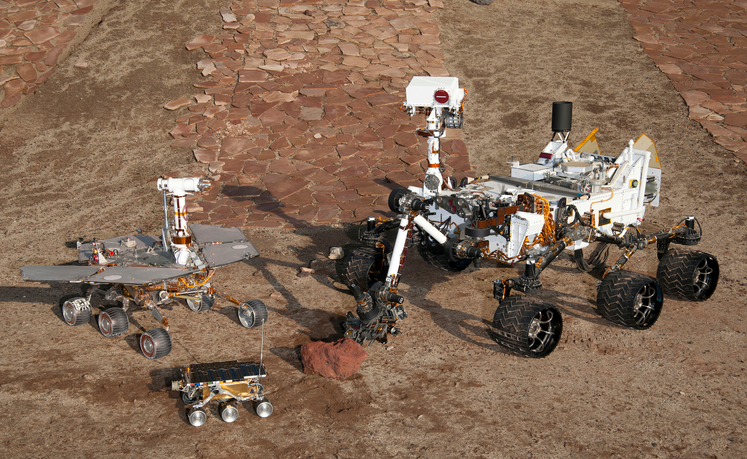 Three generations of Mars rovers, seen at JPL's test site. The small one is the first Mars rover, Sojourner, which landed on Mars in 1997. On the left is a Mars Exploration Rover Project test rover that is a working sibling to Spirit and Opportunity, which landed on Mars in 2004. On the right is a Mars Science Laboratory test rover the size of Curiosity, which is on course for landing on Mars in August. NASA/JPL-Caltech
SHARE

Getting humans to Mars is a challenge in several steps, with the most difficult and dangerous likely to be the descent. Landing safely on another world is hard for a rover, let alone a spacecraft carrying people. But telerobotics could offer a unique alternative — send the people to the planet, but keep them in orbit, and deploy robots to the surface to do the difficult stuff.

NASA officials are discussing tele-operation as a means of space exploration, hosting a symposium earlier this month to discuss possible preliminary tests. Along with keeping humans safely in low-planet orbit, where the dangers are pretty well understood, this approach would solve some of the communication problems inherent in space exploration.

Radio communications between Earth and Mars can take at least 8 minutes and up to 40 minutes, depending on where the planets are, so preparing rover tasks takes lots of time. To make matters easier, the Opportunity Mars rover got some upgrades a couple summers ago so it could decide for itself what to explore, and the forthcoming Curiosity rover also has several autonomous abilities, most notably in its landing system.

But even with advanced decision-making capability, rovers still lack that human sense of perception and curiosity that can drive a new discovery. Having humans in orbit above Mars erases that time delay, and could enable much faster exploration as humans make decisions and tell the rovers what to do.

Human-operated robots already complete incredibly painstaking tasks on Earth, like surgery, for instance, and we’re already pretty good at building sturdy interplanetary rovers. Initial tests could take place on Earth with simulated Mars-ground latencies, and future tests could operate robots on the moon, controlled from lunar orbit, as New Scientist explains it. Astronauts could someday be stationed in lunar orbit, at Lagrange neutral-gravity zones, or even in orbit around other worlds.

NASA’s Exploration Telerobotics Symposium at Goddard Space Flight Center addressed some of the possibilities this month. Click through to NASA to learn more.