The Mars rover has been helplessly mired in sand since April, but lately it's been able to wiggle a little 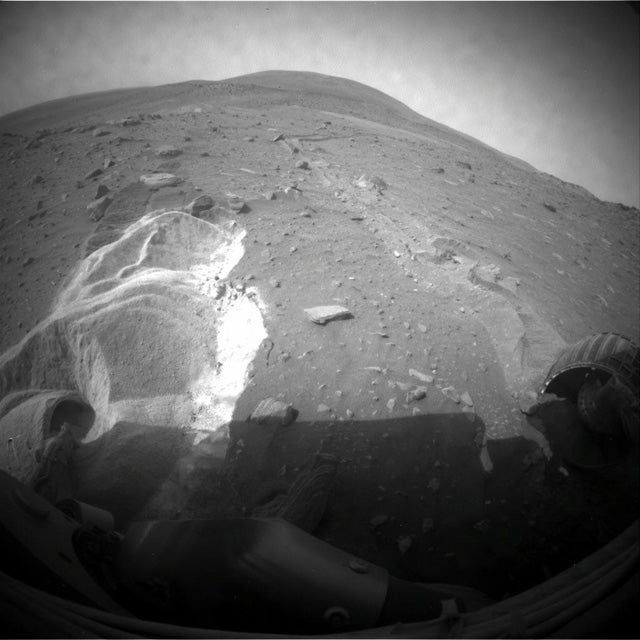 Fans of the intrepid Mars rovers got some bittersweet news today.

The good news: Starting Monday, NASA will try to drive the Spirit rover out of a sandy spot where it has been mired since April.

The bad: It will not be easy, and in announcing their plans today, NASA scientists sounded like they were preparing to say goodbye.

“Unfortunately, Spirit may have met its match in this one,” said Doug McCuistion, director of the Mars Exploration Program at NASA headquarters in Washington.

After the rover got stuck in sand last spring, scientists at NASA’s Jet Propulsion Laboratory built a giant slanting sandbox, trying to simulate Spirit’s predicament to determine how to free it. The rover is stuck in a soft, light-colored substance that McCuistion compared to talcum powder.

Making matters worse is a rock outcropping directly beneath the rover’s underbelly, which could damage sensitive electronics or block the rover from moving at all. After months of simulations and calculations, the rover team decided to try and drive Spirit out the way it came. But there are no guarantees it will work, McCuistion said.

“Despite all the hard work that’s been done and the preparations that have been made, this could end up being where Spirit remains,” he told a group of reporters Thursday.

John Callas, project manager for the rovers at JPL, said Spirit was driving last spring around a geologic feature known as Home Plate, aiming for a rock formation and a crater near the Columbia Hills. Hobbled by a broken front wheel, the rover drove backward around Home Plate, heading for a formation called von Braun and it got stuck. After a few attempts to free it, the rover team decided to let Spirit sit while investigators examined its surroundings. The site has been nicknamed Troy, and geologic features surrounding it are named after characters in the Iliad and the Odyssey.

“Somehow we are at a geologic boundary,” said Ray Arvidson, the mission’s deputy principal investigator. As one silver lining, he said, Spirit’s trap has provided great science.

“Of course no place is a good place to be embedded, but this place is a geological treasure trove,” he said, adding that the soils surrounding Spirit’s wheels have the highest sulfate content of any place on Mars, among other interesting findings.

Spirit and its twin, Opportunity, were scheduled to drive around opposite sides of Mars for three months; to date, it’s been almost six years.

The rovers have battled a series of problems, including sandstorms that cover their solar panels, broken parts and even, in Spirit’s case, bouts of amnesia. But for the most part, they’ve soldiered on. Spirit’s twin, Opportunity, was freed from a sand trap in June 2005, which provides some hope that the rover drivers can do it again. But McCuistion said Spirit’s situation is much worse.

The first commands will be sent Monday, and the rover team will evaluate progress every day. The rover only moves at tortoise pace, about two inches per second, so it will take a while to free it. But if Spirit isn’t free by February, the team might have to call it quits.

“If we can’t get out, it’s likely that this lonely spot straddling this crater might be where Spirit ends its adventure on Mars,” McCuistion said.