The Alpha Particle X-Ray Spectrometer gets its first run on the Red Planet. 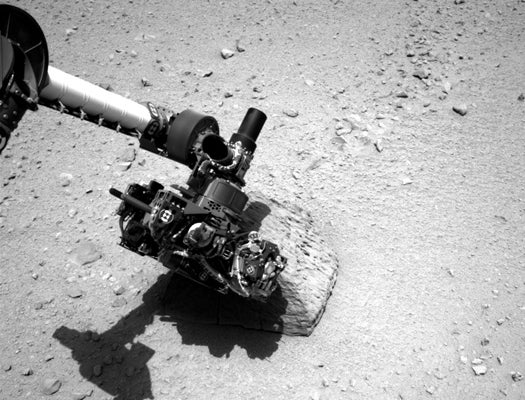 Yesterday heralded news that Mars rover Curiosity had discovered evidence of water once flowing on Mars, but this image of Curiosity reaching out its robotic arm to examine its first rock, taken on an earlier Martian day, is more bittersweet. The rock was named Jake Matijevic, for the rover engineer who died this year. Matijevic helped engineer Curiosity, Sojourner, Spirit and Opportunity.

Curiosity used its Alpha Particle X-Ray Spectrometer to examine the chemical components of the rock. For the process, the rover employs alpha particles and X-rays to knock electrons from the sample out of orbit, then determines what the sample contains based on the energy released. It’s our first peek from Curiosity at the makeup of Mars, with many more to come.