I’m an instrument builder, mostly, and I work on positron-emission-tomography devices: PET. Doctors use them to look for cancer, but... 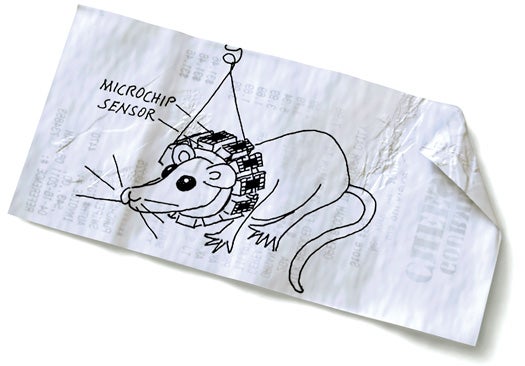 I’m an instrument builder, mostly, and I work on positron-emission-tomography devices: PET. Doctors use them to look for cancer, but neuroscientists use them too. In studies with lab rats, they inject a mildly radioactive substance into the rat, and the PET scan measures the gamma rays the substance gives off. This tells researchers what part of the brain the substance is in and what parts are active.

In the scanner, gamma rays collide with solid particles. This gives off light that is then detected by photo sensors. For a scan to work in conventional PET devices, the rats can’t move, so the animals are anesthetized. But anesthesia affects neurochemistry and skews the test results. We miniaturized the scanner so that an awake rat could wear it.

Commercial PET scanners, even for small animals, are several feet tall and weigh hundreds of pounds. We got ours down to under eight ounces; the outer diameter is a little over three inches. We call it RatCAP, for Rat Conscious Animal PET. We were able to make it so small using two new components: a thinner photo sensor called an avalanche photodiode, and a custom microchip that reads the signal from the sensor. The scanner has a single data line, so the animal can move pretty freely. The device hangs from the ceiling on a long, stretched spring, which takes the scanner’s weight off the rat.

RatCAP is the only tool that allows us to measure what’s going on in the brain while we’re studying behavior, and the rats don’t seem to be bothered. We’ve actually seen a rat in a RatCAP fall asleep.

Paul Vaska is a physicist at Brookhaven National Laboratory.