Surgeons working at Karolinska University Hospital in Sweden have taken a huge step forward for regenerative medicine by successfully executing... 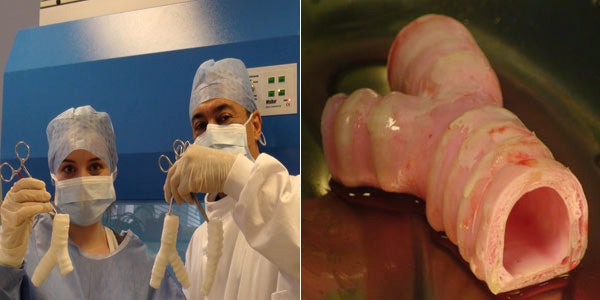 Surgeons working at Karolinska University Hospital in Sweden have taken a huge step forward for regenerative medicine by successfully executing the world’s first synthetic organ transplant. The donor-less transplant saved the life of a 36-year-old cancer patient, who is doing well now after having received a new windpipe grown from his own stem cells.

This story is about as international as it gets: The Eritrean patient, Andemariam Teklesenbet Beyene, was pursuing his doctorate in geology in Iceland when his trachea was consumed by an inoperable tumor that grew so bad that it was actually blocking his breathing. So 3-D scans of his windpipe were sent to scientists at University College London, which crafted a glass scaffold that was a perfect match for Beyene’s trachea and two main bronchi.

The scaffold was in turn was sent to Sweden, where it was soaked in stem cells from Beyene’s own bone marrow. The stem cells took hold and within just two days had filled the scaffold, creating a new trachea that is, biologically speaking, Beyene’s own tissue. A 12-hour operation by an Italian surgeon specializing in trachea operations removed Beyene’s windpipe and all signs of the cancer and then replaced it with the new, lab-grown organ.

That was a month ago. Today, Beyene is recovering well. Because the organ was grown from his own cells, there is no risk of his body rejecting it and no need for the harsh regimen of anti-rejection drugs that usually go hand in hand with an organ transplant. Moreover, there was no need to seek out a donor. In Beyene’s case, that was key. The tumor was increasingly blocking his breathing, and without the transplant he would have died. The clock was ticking, as it so often is in transplant situations.

From stem cell solution to transplantable organ in two days? That’s nothing short of amazing. Moreover, this is just the tip of the iceberg. Theoretically, this kind of procedure could be used to regenerate all kinds of different organs for transplant, eliminating the need (and wait) for donor organs and reducing the complications inherent in them.