A refresher in genetic mutations, breast cancer risk and the perils of overawareness 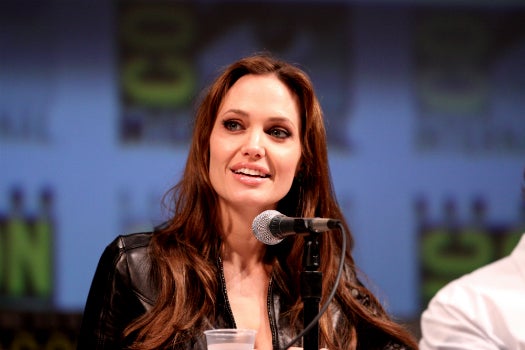 Angelina Jolie’s announcement in Tuesday’s New York Times that she has undergone a preventative double mastectomy to reduce her risk of breast cancer as a carrier of a BRCA gene mutation has garnered praise, sparked debates over genetic testing, and of course, encouraged people to say stupid things on Twitter. But what does the science say? How does Jolie’s experience echo that of other women? And what does it reveal about the state of modern medicine? Here are your most pressing questions answered.

What are BRCA mutations?
Everyone has BRCA1 and BRCA2 genes, tumor suppressors that produce a protein to repair DNA. In some people, one of those genes develops a mutation that increases their risk of getting breast cancer by a large margin. Women with a BRCA mutation can have a 60 to 80 percent chance of developing breast cancer, as well as a high chance of developing ovarian cancer.

Are mutations common?
Not really. It’s hard to estimate how much of the general population carries these mutations–the National Human Genome Institute puts the estimate at .1 to .6 percent. (The average woman has a 12 percent lifetime risk of developing breast cancer. ) Women of Eastern and Central European Jewish ancestry face a higher risk of having either a BRCA1 or BRCA2 mutation–a 2012 study cited that up to 2.5 percent of Jewish women carry it. According to the CDC, for people with the mutation, about half of their first-degree relatives will also carry it.

Some other genetic variations seem to be associated with increased breast cancer risk, including the TP53 and PTEN genes, but they are much rarer, and the link isn’t as well established. “Even though this last decade has bought remarkable advancements in our understanding of the genetic basis of the disease, we still have a long way to go,” says Shicha Kumar, an assistant professor at the Roswell Park Cancer Institute in Buffalo, N.Y.

Only 5 to 10 percent of breast cancer diagnoses overall are associated with gene mutations, many accounted for by the BRCA mutations. For the most part, breast cancer is sporadic, meaning it occurs independent of direct genetic inheritance.

Should everyone get tested?
No. For one thing, it’s expensive: Testing can cost upwards of $3,000. A company called Myriad Genetics holds a controversial monopoly on the BRCA gene tests. (Their right to patent the BRCA genes is being challenged in the Supreme Court.)

Plus, not all mutations will result in cancer. “Many of us have many gene mutations that are completely clinically irrelevant–they don’t manifest in any clinical problem,” Kumar explains. Most people go through genetic counseling to assess their risk of having certain mutations. A genetic counselor can help evaluate a person’s family history and risk to determine whether a blood test is necessary, and can work with insurance companies to make sure the test is covered.

Does everyone with a gene mutation get a preventative mastectomy?
Not everyone. “There is this potpourri of options available to women,” says Anees Chagpar, as associate professor at the Yale University School of Medicine and the director of The Breast Center. “It’s really a choice, which fits best with a patient in terms of their own values and their own risks.” Some women opt for increased screenings, while others take medications like tamoxifen that can reduce the risk of cancer by up to 50 percent.

“Preventative surgery is not for everybody, and it’s not an easy thing to go through,” Kumar warns. Both mastectomy and reconstructive surgery come with their own risks, including pain, infections and a change in skin sensation.

Yet mastectomies in general are on the rise in the U.S. “I think that as people are beginning to get more and more aware of their risks,” Chagpar says. “Whether it’s genetic or any other cause, they’re becoming more really proactive. While the decision is a personalized one, preventative surgeries like the prophylactic double mastectomy is an accepted [decision].”

Todd Tuttle, the University of Minnesota’s chief of surgical oncology, has been an outspoken critic of the trend, saying that in many cases, women overestimate their cancer risk. “You could attribute the rise in mastectomies to a better understanding of genetics or better reconstruction techniques,” he told The New York Times, “but those are available in Europe, and you don’t see that mastectomy craze there. There is so much ‘awareness’ about breast cancer in the U.S. I’ve called it breast-cancer overawareness. It’s everywhere. There are pink garbage trucks. Women are petrified.”

“Some of our understanding is that a lot of it has to do with fear,” Kumar explains. A 2012 study from the University of Michigan Comprehensive Cancer Center found that about 90 percent of women who elected to have a double mastectomy after having cancer in one breast did so out of fear that they would develop cancer in the other breast, but about 70 of them actually had a very low risk of that occurring. “The risk of a contralateral breast cancer in the general population of women with a prior breast cancer is approximately 0.7% to 1% per year, with a cumulative lifetime risk of approximately 15%,” according to a 2005 study.

In response, Kumar says doctors have begun to focus on greater education of the risks of developing breast cancer in one breast after having it in the other, but with BRCA mutations, mastectomies are a more medically accepted decision. “With BCRA, the risk is actually really high,” Kumar says. “Our guidelines dictate that that’s an important conversation to have with the patient.” For women with a BRCA mutation, bilateral prophylactic mastectomy, a preventative surgery designed to removal all breast tissue, reduces risk of breast cancer by an estimated 90 to 95 percent.

BRCA mutations also increase a woman’s risk of ovarian cancer. Though the risk of developing cancer is not as high–20 to 40 percent–doctors often recommend preventative surgery because ovarian cancer has a low survival rate. “We recommend removal of both ovaries, since ovarian cancer is much more difficult to diagnose early,” Kumar explains.

Both surgeries dramatically reduce the risk of cancer, but there isn’t 100 percent certainty. Any residual, microscopic tissue can still become cancerous, so women still undergo surveillance, typically by physical exam, after surgery. But generally there’s not a need for future mammograms or MRIs, according to Kumar.

Will Angelina Jolie make mastectomies more prevalent?
Jolie’s public announcement was meant to encourage more women to get tested. “For any woman reading this, I hope it helps you to know you have options. I want to encourage every woman, especially if you have a family history of breast or ovarian cancer, to seek out the information and medical experts who can help you through this aspect of your life, and to make your own informed choices,” she writes.

The decision to undergo preventative surgery is obviously a personal one, but for some, removing the risk of getting cancer can be psychologically beneficial. “For many women this will allay a lot of their anxiety and still give them a body image that makes them feel whole,” Chagpar says. Jolie has been praised for declaring that her sex-symbol breasts aren’t a core part of her femininity. In a 2005 study, though many were satisfied with their choice, 26 percent of women surveyed felt a decreased sense of femininity after undergoing a contralateral prophylactic mastectomy.

A 2000 study in Journal of the American Medical Association found that “positive outcomes following prophylactic mastectomy include decreased emotional concern about developing breast cancer and generally favorable psychological and social outcomes.” However, the authors wrote, “These must be weighed against the irreversibility of the decision, potential problems with implants and reconstructive surgery, and occurrence of adverse psychological and social outcomes in some women.”

And Jolie’s announcement certainly raised awareness of BRCA gene mutations, with thousands of news sources nationwide covering her story. A whiff of celebrity can have a powerful reach when it comes to medical decisions, as Pacific Standard points out. A 1998 study found that coverage of Nancy Reagan’s 1987 mastectomy influenced women, especially those demographically similar to her, to opt for mastectomies rather than breast-conserving surgery. “Celebrity role models can influence decisions about medical care,” the researchers wrote. “The influence appears strongest among persons who demographically resemble the celebrity, and those of lower income and educational status.”

While BRCA mutations don’t make it into the news very often, breast cancer awareness in general has come under fire recently for being more hype than substance. Just last month, a feature by Peggy Orenstein in The New York Times magazine warned of the harms of over-awareness of breast cancer and covering the world in pink ribbons–over-diagnosis and unnecessary treatment, as well as a misconception that screening or early detection could be a panacea.

Scientific progress is erratic, unpredictable. “We are all foundering around in the dark,” said Peter B. Bach, director of the Center for Health Policy and Outcomes at Memorial Sloan-Kettering Cancer Center. “The one thing I can tell you is some of that foundering has borne fruit.” There are the few therapies, he said — like tamoxifen and Herceptin — that target specific tumor characteristics, and newer tests that estimate the chance of recurrence in estrogen-positive cancers, allowing lower-risk women to skip chemotherapy. “That’s not curing cancer,” Bach said, “but it’s progress. And yes, it’s slow.”