MIT’s Robust Robotics Group seems to be as thrilled with the Kinect and the hacking possibilities that emanate therefrom as... 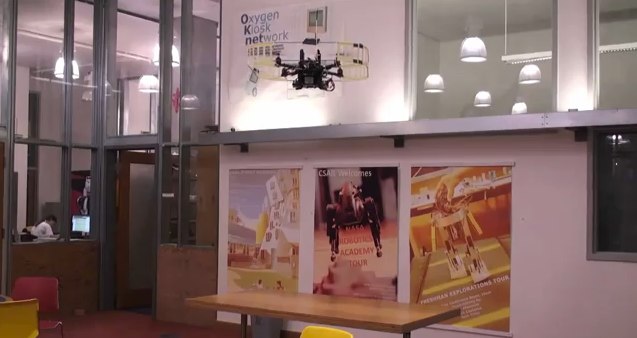 MIT’s Robust Robotics Group seems to be as thrilled with the Kinect and the hacking possibilities that emanate therefrom as we are. They’ve attached a Kinect to a quadrocopter, which enables completely autonomous 3-D mapping and flight–even the processing is done on board.

MIT worked with the University of Washington on this project, using UW’s SLAM (Simultaneous Localization And Mapping) algorithms to construct these pretty models of the environment, using the data picked up by the Kinect’s sensors. The SLAM maps are actually kind of a bonus on top of the main function of the project, which is to enable fully autonomous flight in areas without GPS coverage: SLAM maps are processed off site, but they’re not necessary to the operation of the quadrocopter.

The project has some pretty obvious military uses, which explains why it was sponsored by the Office of Naval Research and the Army Research Office (way to mix up the naming conventions, guys). Being able to send a cheap, effective robotic copter that map an area without GPS or remote control is pretty valuable, a nice step forward for unmanned robotics. For us civilians? We’ll take a super smart Kinectified Roomba.