The idea of small, man portable, soldier-launched aerial drones has been catching on for some time now with military operations... 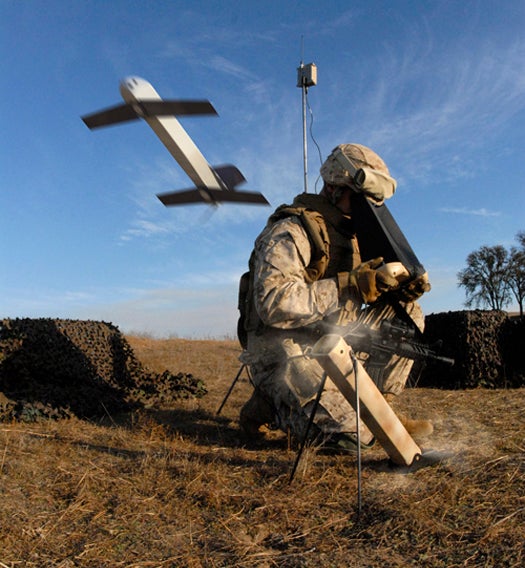 The idea of small, man portable, soldier-launched aerial drones has been catching on for some time now with military operations commanders, as they bring the unique situational awareness and reconnaissance capabilities of larger drone aircraft down to the platoon–or even the individual–level. Now, the U.S. Army is taking the idea to the next level, ordering its first batch of weaponized drones capable of launching from small, portable tube and suicide bombing a target from above.

The drone aircraft are made by Aerovironment, the same California company that makes the Nano Hummingbird surveillance drone (the one regular readers know as a PopSci favorite). Their “Switchblade” drone packs neatly into its launch tube, which then packs easily into a backpack. When it’s time to deploy, soldiers quickly set up the launch tube and send Switchblade skyward, where its wings deploy and its quiet electric engine fires up.

From there a pilot can operate the Switchblade remotely, using a video feed from the drone to pilot it and make observations of a potential target. If the target is confirmed, the pilot can arm the on-board munition and fly the drone straight into the target. The drone can fly piloted or autonomously (though naturally it has to receive human commands before arming and attacking). It can even power down its motor and glide in for the kill, offering mission operators a stealthy means of approach.

While a weaponized robotic aerial kill vehicle sounds cool enough on its own, what Switchblade really offers is a capability–it can loiter overhead and observe a situation on the ground, confirm that a target is indeed a legitimate target and not a civilian or some other non-threat, and then deliver a strike without the soldier who deployed the aircraft ever having to stick his head out. Such a capability trumps calling in airstrikes or artillery fire for small targets, and perhaps best of all it’s a capability available at soldier level.

Update: We’ve located some super-sweet promotional footage of the Switchblade bailing some coalition soldiers out of a tight spot. Enjoy.