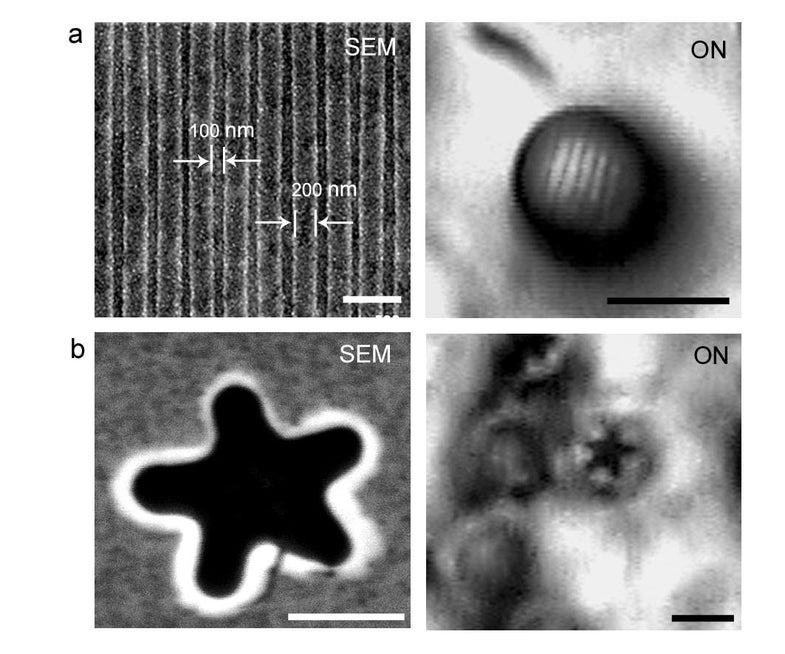 A new microscope combines a normal optical scope with a see-through microsphere superlens, beating the diffraction limit of light and shattering the limits of optical microscopes.

With the new method, there is theoretically no limit on how small an object researchers will be able to see. It could potentially see inside human cells and examine live viruses for the first time.

But these techniques are limited in scope, especially for applications like medicine. Electron microscopes can only see the surface of a cell, rather than examining its structure, for instance. And there is no way to see a live virus in action.

The new method works by integrating a microsphere “superlens” with a traditional optical microscope. The spheres magnify images of items that are placed on the microscope plate, touching the microsphere and forming “virtual images,” according to authors Zengbo Wang, Wei Guo and Lin Li of the University of Manchester, UK. The optical microscope magnifies the virtual images, forming a greatly enhanced image.

“The microspheres are in contact with objects, and the microscope must focus below the object surface to capture the image. This is a very different practice from the normal use of microscopes,” Li said in an e-mail.

The new method allowed Li and colleagues to see objects at 50 nanometers, he said.

“This clearly breaks the theoretical optical imaging limit,” he said. 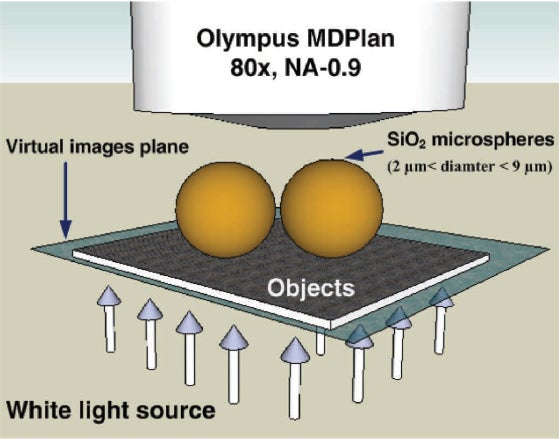 It also overcomes some drawbacks associated with electron microscopes. A TEM sends a beam of electrons through an object, interacting with it as they pass through it. The device forms an image of this interaction and magnifies it. An SEM scans an object with a high-energy electron beam, which also interacts with the sample. The interaction can provide information about the object’s topography and composition. An STM applies a voltage very close to an object, allowing electrons to tunnel through the space between them. This current can be monitored as the voltage tip moves across the object, and is translated into an image. And an AFM essentially feels a surface using a mechanical probe.

Optical fluorescence microscopes can see inside cells by dyeing them, but it can’t penetrate viruses, and it would be nice to see cells without having to inject them with dye. What’s more, the electron methods involve chemical reactions that must be accounted for. Last year, for instance, IBM researchers made an AFM image of a molecule to figure out its chemical composition, but some scientists wondered whether the measuring method itself interfered with the molecule’s structure. It required putting the molecule on a salt crystal, but if no one knew the shape to begin with, they can’t know whether the salt affects the shape.

So it would be nice if you could just take a look at something and see it for yourself. This new method will allow that to happen — imaging viruses, DNA and molecules in real time.

The method uses optical near-field images, which has no diffraction limit, Li said. Near-field images are within the optical wavelength of the optics involved. Far field is beyond that distance.

“Therefore, theoretically, there is no limit on how small we can see. It will depend on how much can we amplify the image using the spheres and relay it to the far field,” Li said.

The team’s paper is published in the journal Nature Communications.