To circumnavigate the world in a record-breaking 40 days, l’Hydroptère Maxi takes inspiration from the Wright brothers 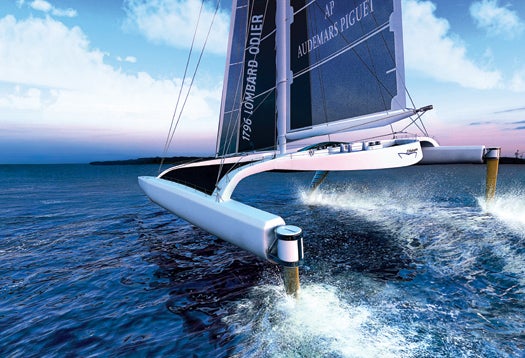 The team behind the world’s fastest sailboat—l’Hydroptère, a 78-foot trimaran that sailed at a record-breaking 50-plus knots (nearly 58 mph) for more than a nautical mile last year—is designing a new model to break another big racing record. With l’Hydroptère Maxi, a crew 0f 10 hopes to sail around the world in less than 48 days and eight hours, beating the current fastest time as set by the French crew of Groupama last March.

The Maxi’s skipper, Alain Thébault, who has been creating high-speed sailboats for 25 years, has assembled a team that includes advisers from the Swiss Federal Institute of Technology and aeronautical engineers. Like l’Hydroptère, whose name comes from the Greek words for water and wing, l’Hydroptère Maxi will be part boat and part plane. At slower speeds, it will glide through the water like a conventional trimaran, floating on a center hull flanked by two stabilizing hulls. But at faster speeds, submerged finlike hydrofoils attached to the bottom of the side hulls act like airplane wings, forcing water over the curved top surface of the foils to lift the hull up to 33 feet above the water. With no drag acting on the hulls, the boat essentially flies across the ocean.

Breaking the record, not to mention keeping the crew safe, rests on the perfect design of the foils and hulls. If the wings snap in rough weather or the hulls suddenly smack into the water, the boat could take a nosedive. “Flying in waves can be dangerous,” says lead designer Jean-Mathieu Bourgeon. Another big challenge is making the boat as light as possible without sacrificing too much strength, to maximize speed and safety in both floating and flying modes.

Thébault and his group will spend the next year designing l’Hydroptère Maxi, including testing scale models of the foils in computer simulators. If all goes as planned, the crew could set sail as early as 2013, possibly starting in Europe and heading south through the Atlantic Ocean to circle Antarctica.

When the wind speed is low—less than 15 knots—the crew deploys a centerboard [not shown] and raises the foils out of the water, switching the boat from flying to floating mode.

Using real-time measurements from stress sensors, GPS and an inertial unit, which measures factors such as roll, pitch and speed, the crew can adjust the boat accordingly for the most efficient sailing.

Crossbeams made from lightweight carbon and titanium connect the central hull to two side hulls. Blueprints for hydrofoil trimarans date back to the 1950s, but not until the advent of composite materials could engineers build strong enough crossbeams to support boats as large as the Maxi.

Unlike the foils on most multihull racing boats, which reduce drag but do not raise the boat completely out of the water, Maxi’s underwater wings lift it up to 33 feet above the ocean’s surface.

Maxi has two rear tail units for better balance when elevated on its foils.

The team will use video cameras to film sail behavior, crossbeam deformation, and how far the foils are immersed in water under various conditions. Computer models are then refined to predict how the boat will behave under even more extreme conditions. 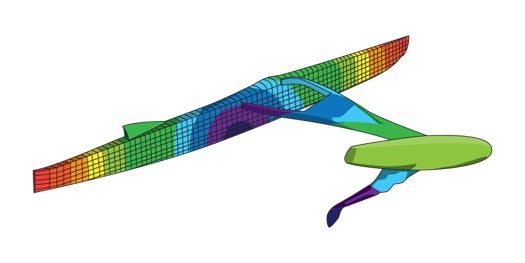 Researchers will outfit a prototype of l’Hydroptère Maxi with strain gauges, accelerometers, and pressure and rotation sensors. Computer simulations will use the data to help designers understand the behavior of the boat as a whole and push the design to its physical limits. This example shows stress distribution [red indicates areas that deform most under pressure].