The Air Force’s Blue Devil airship–a recent PopSci Best of What’s New recipient and a potential answer to the military’s... 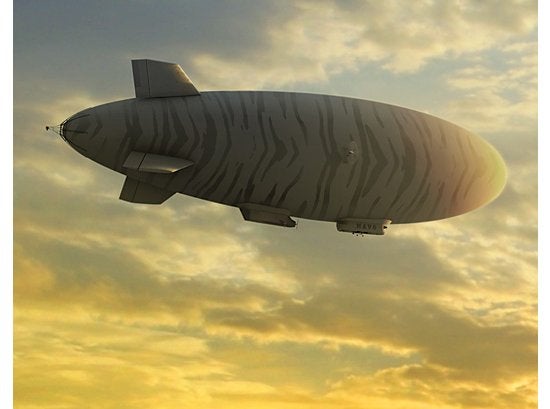 The Air Force’s Blue Devil airship–a recent PopSci Best of What’s New recipient and a potential answer to the military’s expanding data glut problem–is getting yet another high-tech upgrade. Via a federal announcement put out last week, The Register reports that DARPA will outfit the Blue Devil Block 2 ISR airship with up to two Free-space Optical Experimental Network Experiment (FOENEX) systems. Think of them like optical lasers that move through the air with the fidelity of a fiber optic cable.

FOENEX taps adaptive optics technology–the same technology that lets terrestrial telescopes filter out visual noise from Earth’s atmosphere–to correct for distortions in the light caused by things like moisture and particulate matter in the air. They do so by measuring the distortions in a guide laser, then adjusting the receiver to compensate–down to one fifty-thousandth of a millimeter every millisecond. This basically gets rid of all airborne noise that can alter the stream of incoming photons in any way.

As such, FOENEX broadcasts via line-of-sight, through-the-air streams of photons with nearly the same transmission fidelity and reception as optical cable. It’s basically like this floating airship is plugged right into the fiber network, boosting transmission speeds. With resolution right down to the individual photon, FOENEX even opens the door to quantum cryptography.

If you aren’t up to speed on Blue Devil and the military’s ISR (that’s intelligence, surveillance, and reconnaissance) conundrum, here’s why that’s important: Blue Devil Block 2 is what’s known as a C4ISR aircraft. That’s Command, Control, Computers, Communication, Intelligence Surveillance, and Reconnaissance. Unlike the Predators and Reapers that are already in the air streaming buckets of raw, uncatalogued data back to intelligence analysts on the ground, Blue Devil is more like an aerial intel hub. It doesn’t just stream back raw data for human analysts to deal with like Predator and Reaper, but rather it crunches and catalogs the data via a supercomputer in real time on board the aircraft (more about that here).

The optionally-manned Blue Devil carries its own suite of sensors, and it can also handle incoming feeds from Reapers, Predators, and other ISR assets in the area. It processes that data and stores it onboard, and analysts on the ground can then remotely access it via data link, downlinking only the data they need (and leaving all that meaningless data they don’t need aboard the airship). This should streamline the whole ISR process tremendously and get meaningful information in the right hands faster.

And now, with a super-fast FOENEX downlink (or two), Blue Devil should be able to put that actionable intel in the hands of analysts at an even faster rate, cutting the lag between ISR collection and actual human decision-making on the ground.

Interesting side note from The Register: the Pentagon is now referring to Blue Devil as “the USAF/Big Safari Blue Devil Block 2.” Big Safari refers to a long-standing USAF program that’s been putting wild top secret spy plane concepts in the sky for years. It seems Blue Devil has now worked its way under that umbrella.