Phantom Ray Drone Makes Its First Flight, A Piggyback Ride On A Shuttle-Carrier 747

And PopSci was there to watch 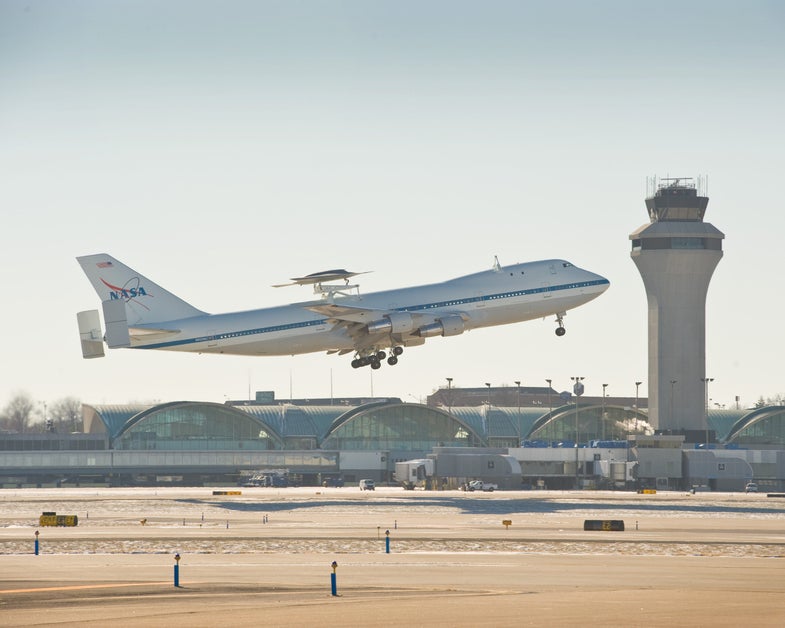 ST. LOUIS — Boeing’s newest spy drone, the Phantom Ray, got its first taste of the air Monday while hitching a ride on a 747 designed to ferry the space shuttle. It was a first for the drone, which is a test bed for advanced UAV technologies, but it was also a big day for NASA, which proved it can find new uses for space shuttle technologies after the shuttles retire.

The shuttle carrier aircraft, dubbed SCAs, had never hauled anything other than the shuttle orbiters. Boeing approached NASA last December and asked to borrow one of the planes, and NASA managers — who have denied previous requests — decided to do it, according to Jill Brigham, a NASA project manager based at Johnson Space Center.

“Initially, NASA management was not going to allow such a unique asset to be used. But with the shuttle program ending, they were more willing to use the aircraft for other tasks,” she said. “This proves that we can do this, we can use the SCA post-shuttle program.”

The 747 arrived at Boeing’s St. Louis facilities Tuesday, Dec. 7. Two days later, workers used a crane to pluck the tiny Phantom Ray drone off a flatbed trailer and swing it up onto the 747. A crane on the plane’s other side carefully set it down onto a special adaptor designed by Boeing structural engineer Randy DeVore. The process took about 12 hours in 15-mph winds, DeVore said.

Phantom Ray is a flying delta wing descended from Boeing Phantom Works’s X-45C demonstrator aircraft, and like its predecessor, it will be used to demonstrate the newest technologies available for autonomous aircraft. Just 36 feet long with a 50-foot wingspan, it will be able to carry a light payload around 4,000 pounds. It will cruise at 40,000 feet, reaching speeds of 614 mph — making it one of the fastest drones on record. Its unusual shape also allows it to evade radar.

It could be used for surveillance and reconnaissance, offensive capabilities like electronic jamming and seek-and-destroy missions, and even autonomous aerial refueling — those uses will be up to the military, according to project manager Craig Brown.

Beginning in January, Boeing will test the aircraft’s capabilities at Edwards Air Force Base in California, but first it has to ship it there. The Federal Aviation Administration doesn’t allow unmanned aircraft in civilian airspace, so flying it there wasn’t an option. Boeing considered putting it on a barge and sending it down the Mississippi River from St. Louis, but that would entail taking it apart, and would have added months of delays before testing could begin. So last year, Boeing asked NASA for a ride.

As part of the deal, Boeing had to come up with an adaptor that could fit the tiny drone where the 122-foot-long shuttle orbiter normally sits. DeVore designed a support system that sat far back on the 747’s fuselage, behind the wings, which reduced the amount of material required. NASA just had to loan the 747 and its pilots, chief pilot Jeff Moultrie and pilot Jack “Triple” Nickel. Monday’s test was intended to prove Phantom Ray will make the trip to California in one piece.

Lambert Airport, where the test took place, has a storied aviation history of its own. Theodore Roosevelt took off from Lambert Field Oct. 11, 1910, becoming the first president to fly. While working for Robertson Airlines, Charles Lindbergh flew airmail from Lambert Field, and local legend says he got the courage to fly solo across the Atlantic after he braved St. Louis’ infamously bad weather.

Boeing officials hope they will be able to analyze flight data Tuesday and send the Phantom Ray to Edwards Air Force Base by Wednesday — if the weather cooperates. 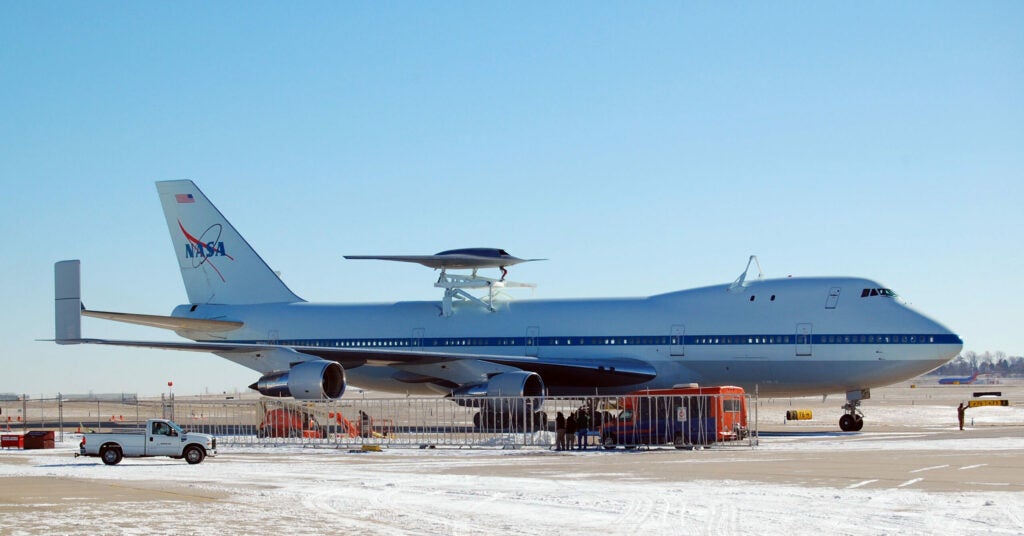 Boeing workers moved the last of the company’s equipment — some of it borrowed from FedEx and UPS, because 747s don’t pay a visit very often — so NASA chief pilot Jeff Moultrie and pilot Jack “Triple” Nickel could fire up the engines. 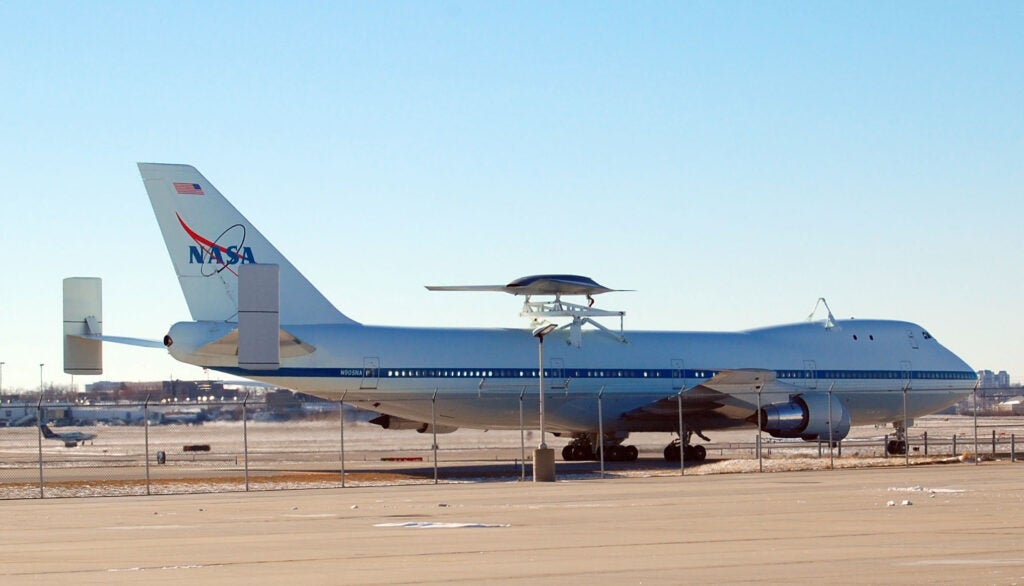 The SCA screams down the runway at Lambert Airport. 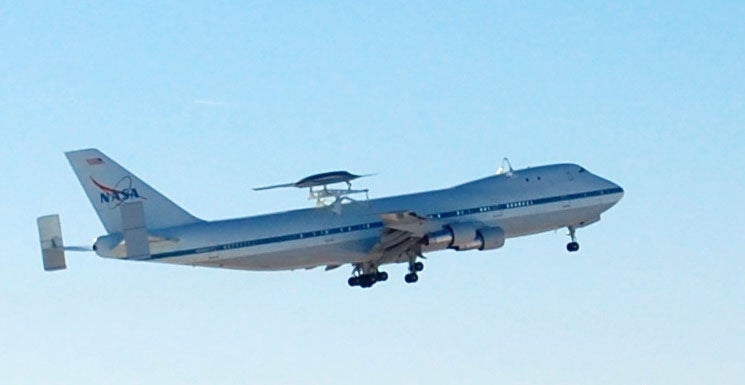 Up in the Air

The SCA took off at 1:40 p.m. and flew for 50 minutes as Boeing and NASA engineers gathered data on both aircraft. 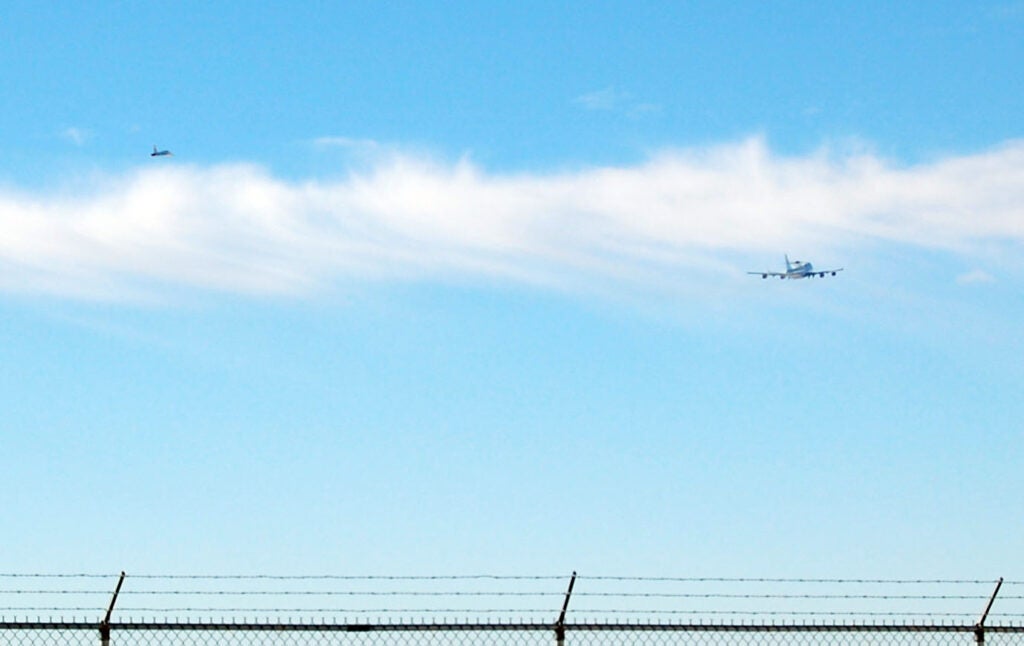 Two pilots followed close behind in a T-38 Talon, which NASA uses as a jet trainer and chase plane. Boeing planned to use a second T-38 to take photos and video of the flight, but it was grounded with a mechanical problem, so astronaut Stephen Robinson was tasked with getting some snapshots. Robinson, who has flown four space shuttle missions, said he got a photo of the SCA flying over the Gateway Arch — which Boeing plans to release later. When the SCA hauls the Phantom Ray to California later this week, pilots will take a detour to fly over the Grand Canyon. 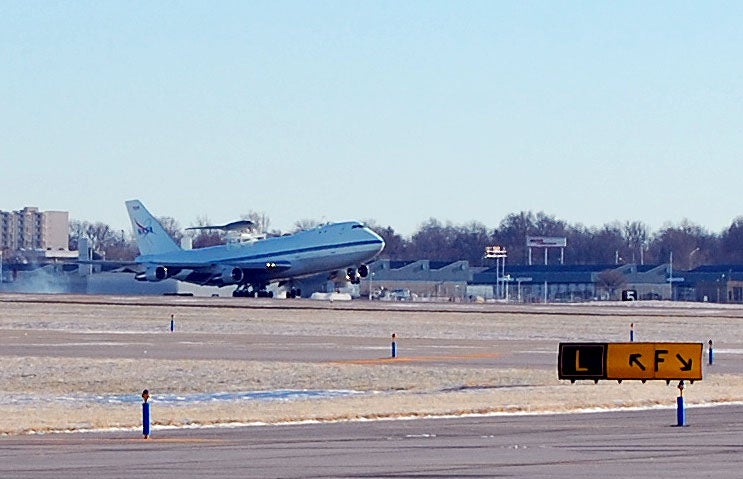 People traveling through St. Louis Monday got a rare view of a NASA jumbo jet hauling a spy drone. The plane’s route took it over downtown, along busy Interstate 70 and past the main terminal at Lambert Airport. Boeing’s facilities are adjacent to the airport.

Taxiing Back to Boeing, T-38 in Front

Pilots and Boeing managers spent several hours debriefing after the flight. Boeing officials hope they will be able to analyze flight data Tuesday and send the Phantom Ray to Edwards Air Force Base by Wednesday — if the weather cooperates. 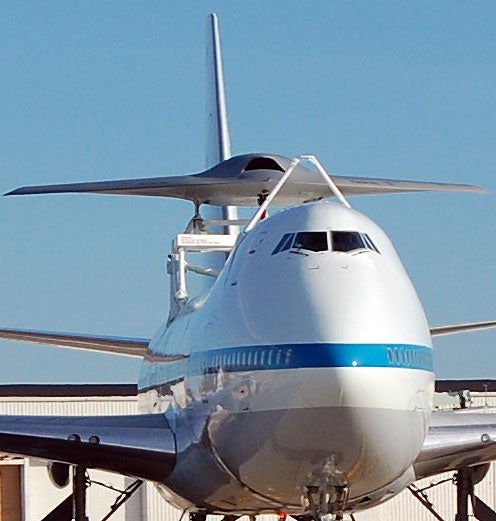 Following the flight, Boeing and NASA engineers inspected both aircraft and the special adapter that mounted the Phantom Ray to the SCA, looking for signs of damage. Initially, everything seemed fine, according to Craig Brown, Phantom Ray’s project manager. 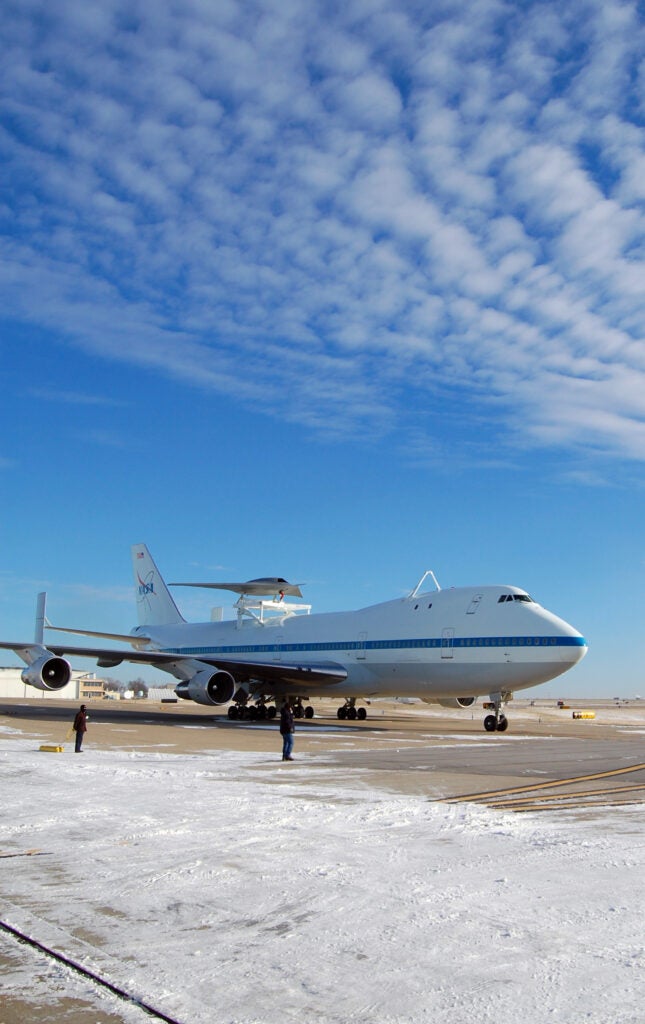 It was so blustery Monday that NASA didn’t have to worry about de-icing the 747, because the wind cleared all the snow from its wings. Around 2 p.m., when the SCA landed, the mercury was hovering just above 15 degrees F; with 30 mph sustained winds, it felt like -5 degrees F. But I’m not complaining — it’s not every day you get to watch a spy plane’s maiden trip to the skies.
Aviation
Drones
boeing
feature
phantom ray