PopSci Q+A: The Power Couple of Pyrotechnics Explains the Perfect “Wall of Fire” 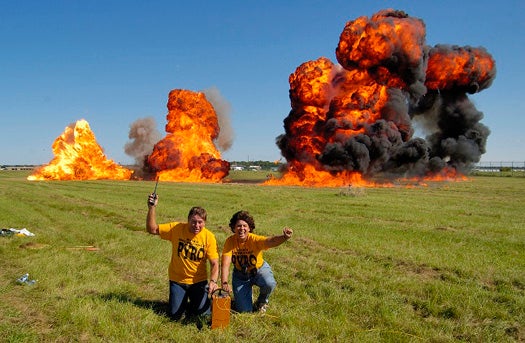 _They learned to handle explosives in the U.S. Army and they met while skydiving in Wisconsin (he was flying, she was jumping). Now, Rich and Dee Gibson travel the country blowing stuff up, creating dazzling pyrotechnic displays for airshows–and even for the occasional film–that are second to none.

That’s not just our opinion. The Gibsons hold five world records, and later this month the Experimental Aircraft Association will honor them with the 2011 Bill Barber Award for Showmanship, an annual accolade given to the best in the business of airshow theatrics. Chief among the Gibsons’ qualifications: a trademark “Wall of Fire,” which the EAA describes as “the standard by which all others are measured.” So how does a husband-and-wife team become the power couple of pyro? It starts with a vision–and lots and lots of unleaded gasoline._

POPSCI: So how does a married couple fall into the pyrotechnics business?

Rich Gibson: We both had some formal explosives training in the service. But in my case, it started earlier than that. When I was a little kid I was always attracted to anything that went “boom.” On the fourth of July I would crawl up as close as I could to the fireworks, or I would hang out around the edge of a quarry waiting for something to blow up.

Dee Gibson: I was always attracted to fireworks too. I always wanted to sit as close as I could to the guys setting them off. But my formal training came in the U.S. Army through the Corps of Engineers.

R: Unleaded car gas. We just use ordinary unleaded car gas right out of the truck. We’ve been asked to use different things, but you have to keep in mind environmental regulations and the fact that you’re doing this in front of a live audience. You don’t want someone to breathe in something and then say “I don’t feel so good.” So you want to know exactly what you are working with.

POPSCI: Having worked with various explosives in the military, is there something else you would rather use if it weren’t for the various regulatory and safety considerations?

R: The gasoline works very well for the effect we want. Propane is used in a lot of places, but it’s complex to handle. It burns very cleanly, but it’s not necessarily what we want for what we’re doing.

But there are two sides to what we do. What you see is the gasoline. What you hear is something entirely different. Gasoline makes very little sound when it blows up. We augment that with some explosives. On the explosives side of things, we use what you would usually use in a quarry or a mine: a lot of dynamite and blasting caps and things of that nature.

POPSCI: What kind of technology goes into this line of work?

R: We keep a very, very simple system, basically hard wires and batteries. People ask to see the kind of technology that we use, and they wind up being more amazed with the simplicity of it. The trick is really the management of the group of people we have–it takes a lot of people to set this up in the morning–and then the presentation. Anybody can make something explode, but putting two or three explosions together to create the desired effect for the audience–the timing of the whole thing–that’s really where the tricks of the trade come in. That’s showmanship.

POPSCI: What’s the biggest “Wall of Fire” you’ve ever created, and what makes it “the standard by which all others are measured?”

R: From an official standpoint with the gasoline, we set Guinness’s world record five different times. The biggest one that we did was a little more than 7,600 feet long, and went up to 200-300 feet in height.

We use a lot of materials in it. A lot of our competitors focus on doing things less expensively. They cut down on the amount of gasoline and the amount of explosives. They don’t have a quality crew, and they don’t want to work hard. So their wall of fire will look more like a picket fence than a wall of fire.

POPSCI: Is there a display you’ve always wanted to try but never had the opportunity?

R: One of the things I’ve thought about adding over the years is a laser show along with a nighttime pyro show. There’s nothing really keeping us from doing it other than putting in the time and whatever it takes to put the two things together. You don’t want to go live with lasers in front of a live audience without some experience.

D: We’ve been starting to incorporate our displays into more unusual and unexpected acts, not just aircraft acts. In Salinas we worked with Robosaurus, the hydraulic flaming and car-eating mechanical dinosaur. He came out there and was breathing fire and we boomed and banged all around him.

I like those unusual things. After 30 years I’m looking for something that’s a little different. We once put a 25-foot-tall blue, blow-up gorilla into the middle of one of our acts. I like those novelty shots, the things you don’t see every day.

This has no basis in reality, but I’d like to do a strafing run with daytime fireworks. It’s a very expensive shot. We do strafing runs now with a series of mini-explosions linked together, but I’d like to do the same kind of thing with fireworks, maybe some colored explosions and other things that have no real basis in reality but would be fun to try.

POPSCI: Any advice for aspiring pyrotechnicians out there who might want to make a life out of blowing stuff up?

R: I would say, pick a quality company and learn the basics and the safety rules, and don’t deviate from that.

D: There is no real formal school for the kinds of things that we do. We learned a lot by hit and miss and trial and error– a lot of errors and a lot of trials–to get to where we’re at right now. But you have to do it safely.

R: Not at all. A good fireworks show still brings a smile to our faces.