You Built What? A Motorized Easy Chair to Roar Around Campus

Getting to class just got a little faster 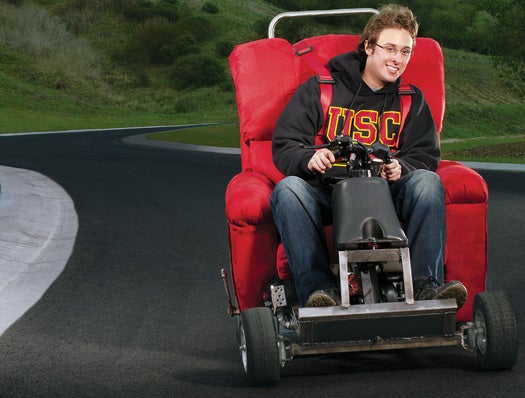 Chris McIntosh’s first recliner was not your standard La-Z-Boy—it was electric-powered and capable of going 15 mph. After finishing it a year and a half ago, he used it to pull a doughnut on his high school’s front lawn, circle the gym during a pep rally, and rule the street near his home in Orinda, California. Now a freshman at the University of Southern California, McIntosh spent his youth building ad-hoc vehicles (he once made a mini hovercraft out of a leaf blower), so when the chair’s paltry electric motor burned out, he decided it was time for a monster makeover. “I wanted to go fast,” he says.

To upgrade the recliner, he removed the electric motor he had installed, the motor’s controller, a pair of batteries, and other parts. He bought a nine-horsepower, four-stroke dirt-bike engine, which fit perfectly in the space beneath the seat, and welded on a fixed rear axle so the engine could power both rear wheels instead of just one, as the electric motor had. Bike engines need to be kick-started, but the recliner’s lever snapped when he tried to use it. He welded on a motorcycle kick-start lever instead.

Then there was the danger of the vehicle catching on fire. The dirt-bike engine’s exhaust pipe got so hot that it sometimes glowed red and threatened to set the upholstery (and McIntosh) ablaze. To avert disaster, he rerouted the pipe, mounting it farther from the underside of the chair, and then covered it with a heat-shielding, fireproof wrap. His parents were pleased.

Still, the first test drive was frightening: McIntosh immediately popped an accidental 45-degree wheelie. He added 30 pounds of weights near his feet to keep the front down, along with a roll bar and harness for safety. The newly completed gas-powered version now goes 40 mph and, just as important, he says, “it sounds like a Harley.” 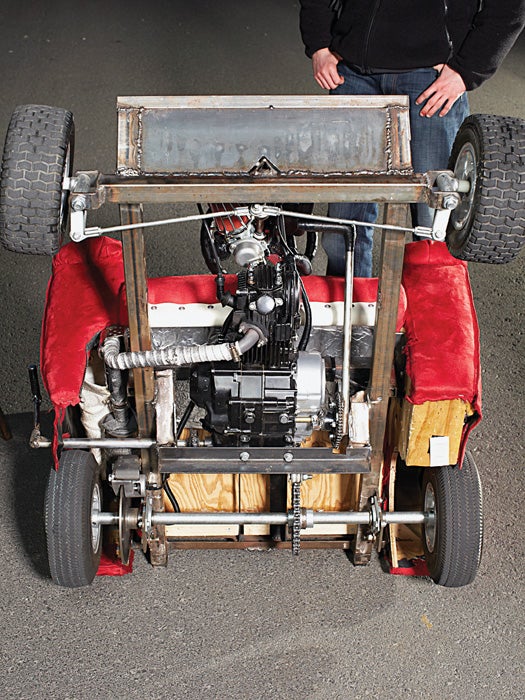 Inside the Motorized Recliner

The dirt bike had a foot shifter, but McIntosh converted it completely. He attached an electric-scooter throttle to the steering wheel and wired that to a speed controller from an electric wheelchair, which governs an electric motor that changes the gears. Now if he flicks the lever on the converted throttle, the chair upshifts; if he flicks it while holding down a nearby red button, it downshifts. This quick-shifting system, he says, “is especially useful for popping wheelies.”

McIntosh figured the chair wouldn’t be street-legal, so he designed it to fit in the back of his hatchback. He slides off the backrest, leans a ramp against the back of his car, and pushes the heavy frame up and in. He typically uses it in parking lots, but he does occasionally take it around local streets and is thinking of bringing it to USC’s homecoming parade this fall.

The chair has no suspension at all. “The ride gets a bit bumpy,” McIntosh says. “But then again, there’s plenty of padding.” Initially he had trouble turning because all the chair’s mass was toward the back, but adding weights near his feet gave the front wheels more traction. He says he has now mastered climbing hills and turning at stop signs, although he’s planning to add a rearview mirror to reduce the large blind spot behind the backrest.