A Completely New Kind of Aircraft Propulsion System, Made of Rotating Cylinders

No wings, no rotors, no jets

An Austrian engineering firm debuted a new type of hovercraft at the Paris Air Show this week, claiming it can take off and land vertically without using any rotor blades or fixed wings.

The D-Dalus vehicle uses four contra-rotating turbines for propulsion, each reaching 2,200 rpm. Each turbine blade has a variable angle of attack, which according to the designer allows the main thrust to be fired in any direction, around any axis. This allows the craft to launch vertically, hover, rotate in any direction and even thrust upwards, holding itself down.

The designer, Austrian Innovative Aeronautical Technology (IAT21), maintains a sparse website that says the craft has several patented inventions, including “a friction-free bearing at the points of high G force, and a system that keeps propulsion in dynamic equilibrium, thereby allowing the guidance system to quickly restore stability in flight.”

IAT21 has been working on a prototype for three years and has recently completed initial testing using a 120 bhp KTM engine to drive the turbines, according to Gizmag. The company completed tests transitioning from vertical to forward flight in a laboratory near Salzburg, Austria.

The current model has 5-foot-long turbines and can lift a payload of about 150 pounds. IAT21 is working with Cranfield University in the U.K. on a larger, more powerful motor, a new hull shape and advanced guidance and control systems, Gizmag says.

It’s designed to work as a drone for sea- and land-based uses, like search and rescue, disaster monitoring and surveillance, IAT21 says. Eventually, larger models could be used for passenger flight. 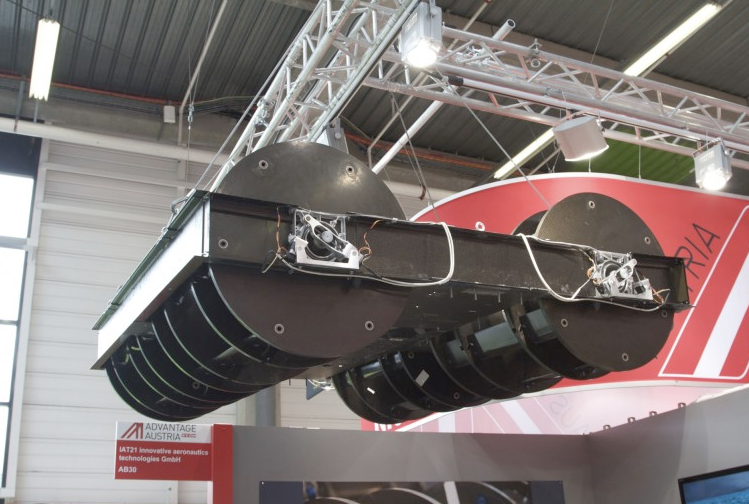