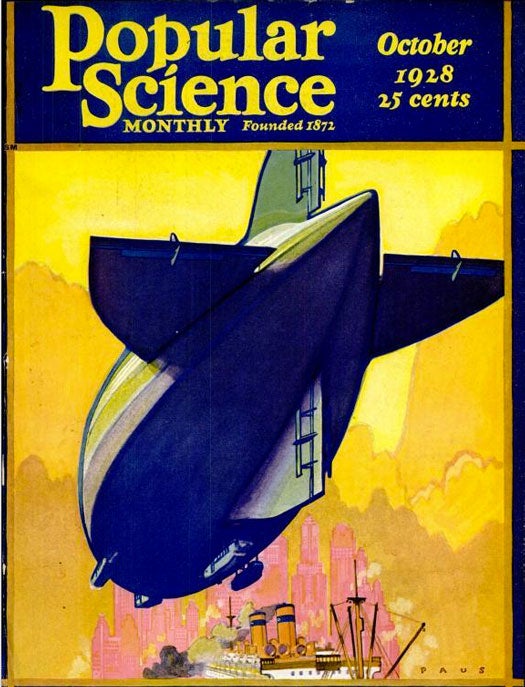 When it comes to retrofuturism, few motifs lie closer to our hearts than the 1920s-style airship. These majestic “whales of the sky,” once considered a standard feature of future skylines, had an unfortunate tendency to burst into flames or get caught in thunderstorms. Only in the imaginations of science fiction enthusiasts do they continue flourishing.

Their demise is regrettable, considering our enthusiasm for their development in the 1920s. After serving the German army in World War I, zeppelins garnered popular appeal when Hugo Eckener re-established them as vessels of peaceful air travel rather than as weapons of warfare. Although Germany continued dominating the industry, American and British manufacturers produced airships that — for better or for worse — changed the course of aviation.

The decade began with a breakthrough: skyscraper mooring masts. Previously, airships were forced to make risky ground landings, which required hundreds of crewmen and an expensive hangar shed to coordinate. A mooring tower would reduce that process significantly, since airships could simply latch on to them while passengers disembarked. Someday, fleets of dirigibles would hover over American skyscrapers equipped with spires and towering terminals.

Dirigibles were poised for ubiquity. They would replace ocean liners as the luxury Transatlantic vessel of choice. They would plant pagoda-style apartments in up-and-coming neighborhoods. They would fight wars alongside battleships, and in the future would come equipped with landing fields for small aircraft.

But alas, the fires, the thunderstorms, and even ground winds injured the reputation of zeppelins beyond repair. Despite their spaciousness and serenity, dirigibles were too much of a liability for investors. At least they’ll fly freely in our archives.

Click through our gallery to see more fantastic images from the golden age of zeppelins. 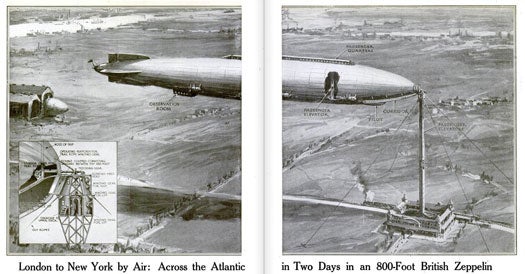 Nothing says “traveling in style” like flying from London to New York in a commercial zeppelin. Not to be outdone by the Germans, British manufacturers announced plans to produce a transatlantic airship that could bring you to your destination in half the time it would take by ocean liner. Six engines would power the 800-foot zeppelin to fly at 75 miles an hour. Since ground landings were difficult and hangars were costly, engineers also built mooring towers where airships could dock in between trips. After disembarking, passengers would ride a long elevator back down to the ground. We imagined that every major American skyline would one day be “fringed with titanic steel towers” for catching these majestic airships. Read the full story in “London to New York by Air: Across the Atlantic in Two Days in an 800 Foot-British Zeppelin” 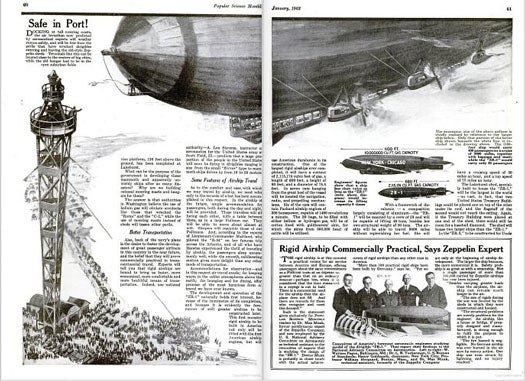 After the ZR-2 British airship intended for our fleet crashed in 1921, we built the ZR-1 Shenandoah, the first rigid airship constructed in America. At that point, people doubted the safety of zeppelins, but the government assured us that transitioning into helium and constructing mooring masts (instead of ground-based sheds) would eliminate the accidents that befallen previous efforts. Experts insisted that airships were commercially viable and provided a better experience than steamers and airplanes. Zeppelins could not only carry more passengers and remain in the air longer than planes, but they came equipped with luxurious accommodations. Passengers could lounge in the dining room, linger on the observation deck and sleep in comfortable beds. What could possibly go wrong? “The fire hazard is negligible,” wrote Max Michael Munk, a German aerospace engineer working for the U.S. National Advisory Committee on Aeronautics. “No German airship was ever burned in the air save by enemy action.” Read the full story in “Navy Builds America’s First Rigid Airship to Prove Commercial POssibilities of Huge Airliners” 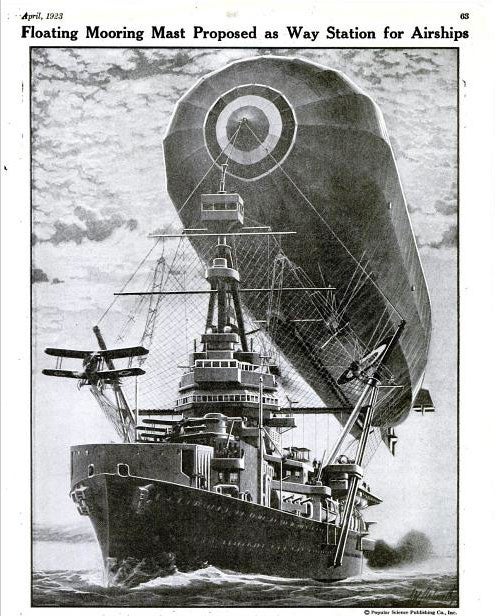 Experts predicted that in future wars, zeppelins would accommodate battleships to sea. Aeronautics engineers proposed installing mooring rigids to the masts of converted cruisers, which would act as the dirigibles’ depot ships. The front of the ship would house a small hangar and launching pad for fighting planes. Guide ropes projecting from the sides of the ship would hold the dirigible in place while ship crews fastened its nose cone to the mooring device. Read the full story in “Floating Mooring Mast Proposed as Way Station for Airships” 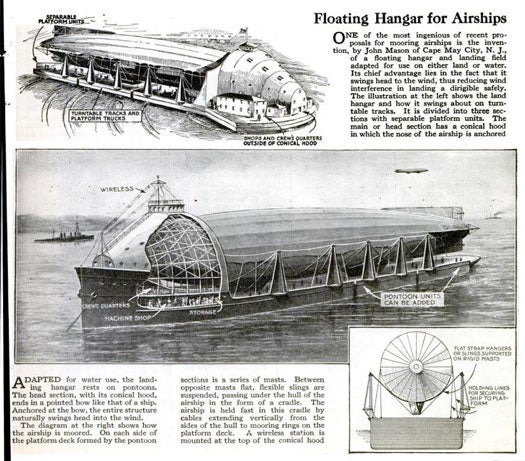 Parking airships could be a little tricky, as housing one the ground required scores of crewmen to swing it in the right direction and wheel it into the shed. One wrong move could mean ruin for its intricate aluminum framework or outside fabric. John Mason of Cape May City, N.J., proposed two methods for making the process easier. A turntable-style landing field, pictured at the top, would allow the airship to swing in either direction, thus reducing friction from the wind. He also proposed a floating pontoon hangar that could cradle an airship in a giant web of slings. Read the full story in “Floating Hangar for Airships” 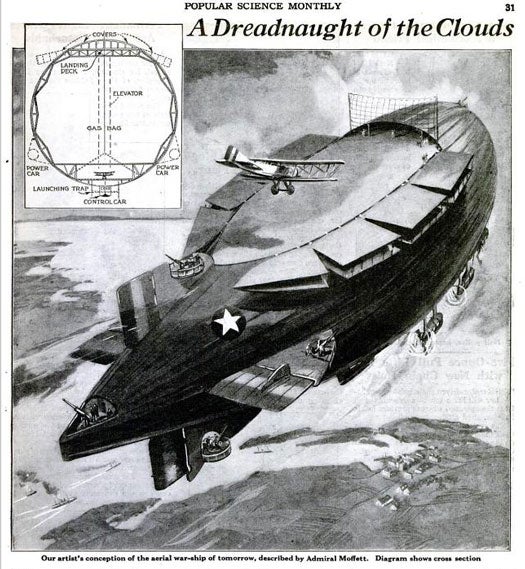 This is not ordinary airship. It’s not only equipped for battle, but can also serve as an airborne landing field for accompanying planes. “It is well within the bounds of reason to predict that the naval airship of the future will carry a dozen planes that will be capable of defending her against air attack, and in addition will mount a battery of guns that will command the respect of any enemy marauder,” we wrote. In addition to carrying airplanes and lifeboats, the airship would transport dozens of troops around the world. By then, we’ll have developed superior launching technology as well. Takeoff would be as simple as “pushing the planes off into space,” where they would drift upward like “a bird thrown into the air.” Read the full story in “Sky Leviathans of Tomorrow” 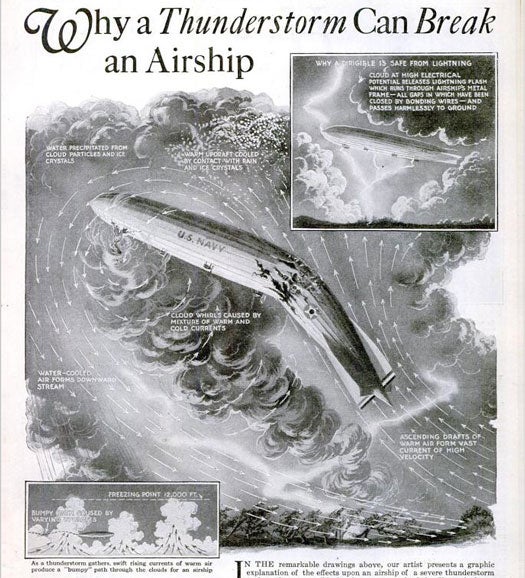 The poor ZR-1 Shenandoah. On its 57th flight, the airship crashed in Ohio after a storm tore it in several pieces. Here, we provided a graphic representation of how mighty airships go down. Rising currents of hot air produce a rough path, causing turbulence. A thundercloud forms, and the conflicting currents whip the airship about until it caves in to the pressure. Although you’d think to blame lightning for bringing down airships, the current actually passes harmlessly through the aluminum frame to the ground. Read the full story in “Why a Thunderstorm Can Break an Airship” 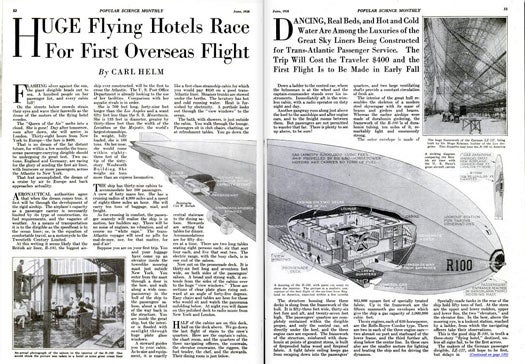 Now here’s what We’re going to preemptively file flying zeppelin hotels in the top 10 coolest things ever featured. The hypothetical airship we had in mind could accommodate 100 passengers in 39 cabins. While traveling between Europe and New York, you’d enjoy a luxuries akin to the ones on Transatlantic ocean liners. Rooms would come with hot and cold water and private bathrooms. During your free time, you could lounge on the glassy promenade deck. “Easy chairs and tables are here for those who would sit and watch the panorama unfolding below,” we said. “At night you will dance on this polished deck to radio music from New York and London.” It might sound a little far-fetched in retrospect, but the concept is also rather magical. Read the full story in “Huge Flying Hotels Race For First Overseas Flight” 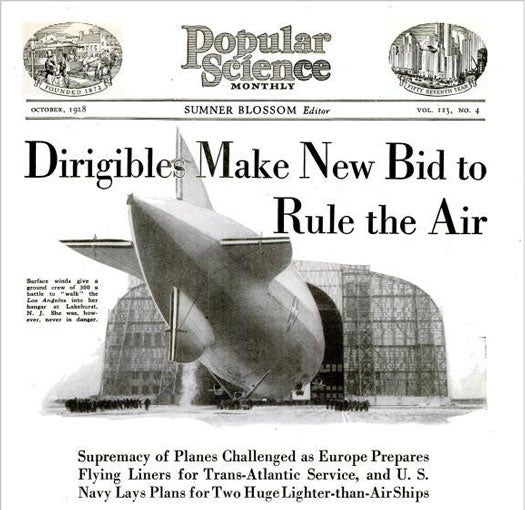 After all the accidents, the public wasn’t sure whether dirigibles could retain their popularity, let alone overtake airplanes as ruler of the skies. On the one hand, it seemed like dirigibles were less expensive to manufacture since the materials required to accommodate large-scale transportation were lighter than those required by a similarly-sized airplane. We also factored in passenger comfort. People riding airplanes would be strapped to a seat, while those in a dirigible would be able to move about freely. On the other hand, their susceptibility to windstorms and explosions made them impractically high-maintenance. Speaking of impracticality, a Transatlantic trip in a dirigible would take two days, which is longer than some passengers can tolerate, but we couldn’t discount the novel luxury dirigibles offer. “Yesterday the winged machine held all our attention,” we wrote. “Today graceful whales of the airy ocean loom overhead to thrill us.” Read the full story in “Dirigibles Make New Bid to Rule the Air” 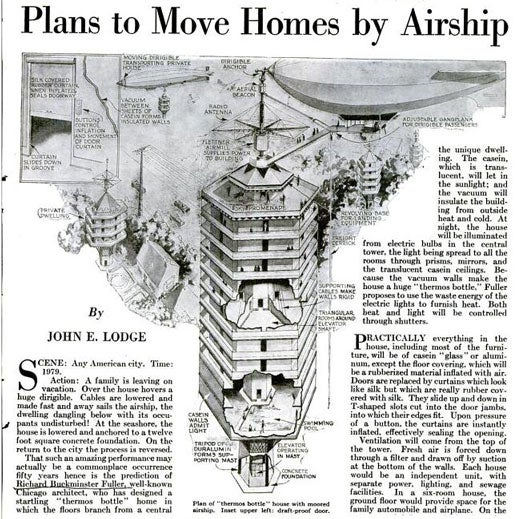 “Scene: Any American city. Time: 1979. Action: A family is leaving on vacation. Over the house hovers a huge dirigible…” That scene alone might describe an alternate universe, but what comes next sounds even more fantastic: cables lowered from the airship would lift the house off the ground and carry it to the family’s favorite vacation spot. No need to pack or a book a taxi to the airport. This plan was conjured by none other than Richard Buckminster Fuller, of buckyball fame, who designed pagoda-shaped “thermos houses” that could latch onto dirigibles. Each would cost a mere $3000 and be equipped to withstand dire weather conditions. Houses could be “planted” in a single day, but they’d come with everything you’d expect in a regular apartment dwelling: plumbing, elevators, and a garage for the family car and airplane. Read the full story in “Plans to Move Homes by Airship” 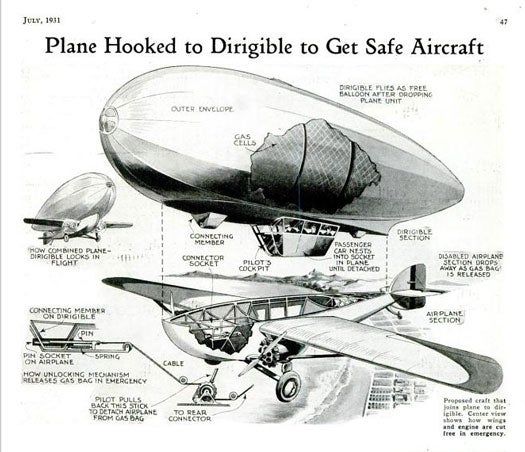 Sometime during the golden age of zeppelins, someone figured that as long as dirigibles and airplanes were competing for domination, we might as well combine their best features into one aircraft. Inventor George W. Hardin proposed several models, including one for families and others for carrying freight, troops and mail. Pilot and passengers would sit in the upper part of the machine to allow for safe detachment in case of an emergency. If the plans sound far-fetched, we don’t blame you. Even the inventor admitted that his lack of extensive aeronautics knowledge probably lent itself to flaws int the design. Read the full story in “Plane Hooked to Dirigible to Get Safe Aircraft” 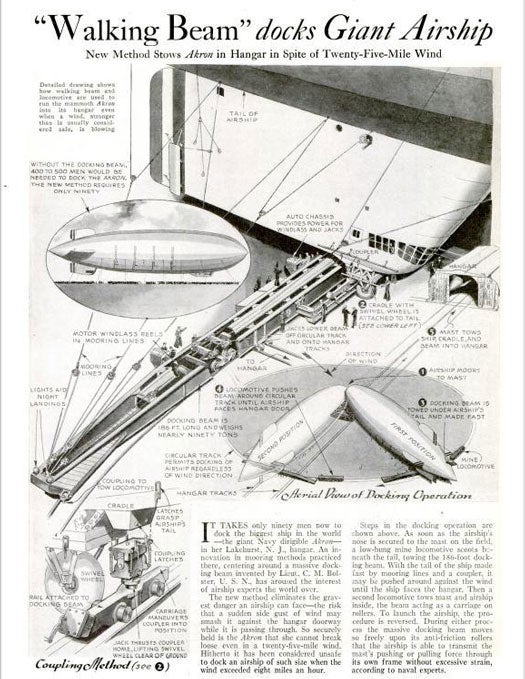 Like we said earlier, landing an airship was a tricky, expensive business. Hangars were not only spacious and expensive, but an airship needed several hundred men to tow it in the right direction once it reached the ground. Even then, strong winds could push the airship into the door of the hangar, injuring its outer shell. Lieutenant C.M. Bolster, of the U.S. Navy, however, developed a novel docking method that would reduce ground crew from 400 to just 90 people. Here’s how it would work: after the airship was fastened to the moor, crewmen would attach a wheeled docking beam to the the tail. The beam would steer the airship in the right direction. Then a second beam would haul the airship by its nose into the hangar. Read the full story in “‘Walking Beam’ Docks Giant Airship” 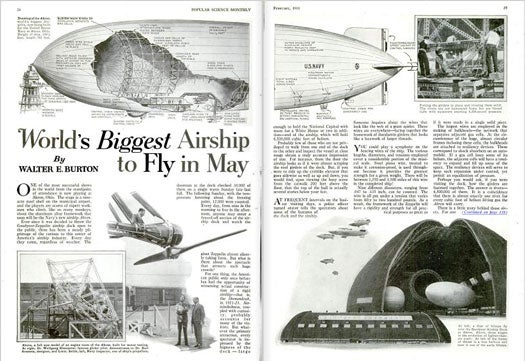 As this headline shows, we expected a lot from the USS ZRS-4 Akron, a helium-filled airship poised to become the greatest in American history. The ship was massive; at 785 feet in length, it held five airplanes, seven machine guns, and 89 officers and men. In reality, the Akron was a bit of a flop — literally. Although it logged several hours of flight, the Akron went down in a storm that killed 73 out of 76 crew members and passengers. In 1933, after just two years in use (and four accidents), the Akron was gone for good. This accident marked the beginning of the end for zeppelins in America. Read the full story in “World’s Biggest Airship to Fly in May”
Aviation
AIRSHIP
archive gallery
archives
DIRIGIBLE
future then