Hundreds of Miles of Wind Farms, Networked Under the Sea 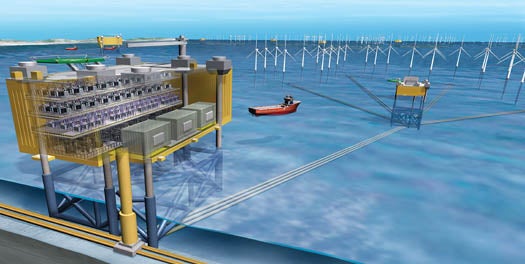 During the last ice age, glaciers a mile high pushed several dozen cubic miles of rock, sand and debris into the ocean off North America’s mid-Atlantic coast, creating a broad shelf that extends up to 40 miles offshore. This long, flat stretch of seabed and the shallow, windy waters that cover it make the ideal spot for dozens of offshore wind farms—and if all goes well, the network that would link those turbines together and back to the coast will soon be in place.

Offshore wind power has significant advantages over the onshore variety. Uninterrupted by changes in terrain, the wind at sea blows steadier and stronger. Installing turbines far enough from shore that they’re invisible except on the very clearest days lessens the possibility of not-in-my-backyard resistance. The challenge is getting the electricity back to land, to the people who will use it.

The Atlantic Wind Connection could provide an entirely new model for connecting seaborne energy with land users.The Maryland-based transmission-line company Trans-Elect proposes to do just that with a $5-billion undersea power grid that would stretch some 350 miles from northern New Jersey to southern Virginia. The Atlantic Wind Connection (AWC) would provide multiple transmission hubs for future wind farms, making the waters off the mid-Atlantic coast an attractive and economical place for developers to set up turbines. The AWC’s lines could transmit as much as six gigawatts of low-carbon power from turbines back to the coast—the equivalent capacity of 10 average coal-fired power plants.

So far, the project has attracted backing from Google, the clean-energy investment firm Good Energies, and the Japanese trading company Marubeni. Trans-Elect says it plans to begin construction on phase I—a $1.8 billion, 150-mile span from Delaware Bay to Atlantic City—in 2013, and that section could be operational by 2016.

To appreciate the novelty and potential of the Atlantic Wind Connection, it helps to understand the building blocks of an offshore wind system. At its simplest, offshore wind transmission involves connecting a group of wind turbines to an AC transmission cable, which will carry the electricity they generate back to land. (Nearly every wind turbine on the market today generates AC power, the standard for the terrestrial grid.) But AC cables are generally efficient only over short distances, particularly when they’re used underground or underwater. 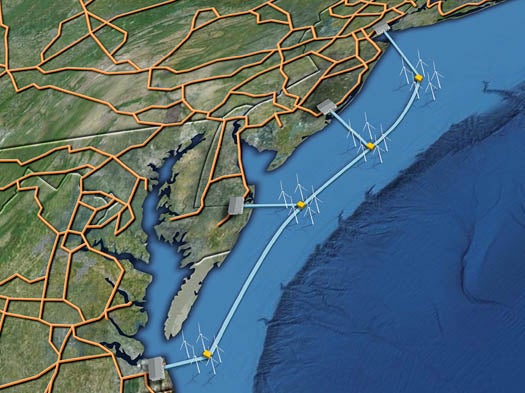 The Atlantic Wind Connection would link the wind-power equivalent of 10 average coal plants back to shore.

Wind farms connected to land by AC cables would therefore be forced to cluster around a limited number of spots where the cables could access the terrestrial grid. Those spots, however, might not necessarily be the best places to park a wind farm. Placing turbines in the windiest possible places might involve transmitting power greater distances than AC lines are capable of—and that requires high-voltage DC cables, along with a series of voltage converters to transform the AC power coming out of the windmills to DC and then, once ashore, back again.

What makes the AWC both so ambitious and so innovative is that it is designed to link multiple DC systems together into a full, multidirectional undersea grid. The system will be capable of channeling power as needed among multiple wind farms and consumers on shore, a project of unprecedented scale and complexity.

The nodes of this network will be voltage converters that sit on offshore platforms in huge, weatherproof boxes. Each one will be connected to other wind farms and converter stations. Power will flow among them, as well as to the land-based stations that feed into the terrestrial grid. Each voltage converter will be able to respond instantly to changes in power flow in the terrestrial grid—to ratchet power up and down based on supply and demand back on land. As a result, even before the AWC is connected to a single wind farm, it will help stabilize the mid-Atlantic’s aging, overtaxed grid, preventing brownouts and blackouts. 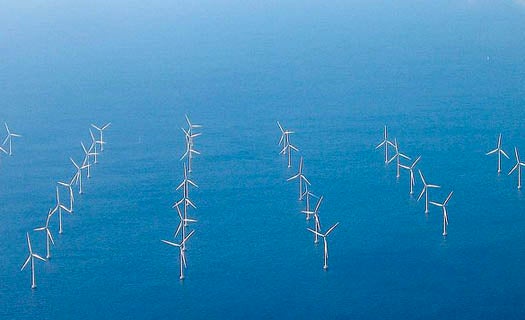 Undersea power cables require metal shielding to protect them from fishing nets and marine life. But metal shielding doesn’t work so well for the alternating-current (AC) lines used almost universally in the terrestrial grid, because the electric field surrounding an AC line changes direction 120 times a second, enough to heat up a metal shield like a toaster coil. Over long distances, this interaction saps enough energy to make buried AC lines impractical—hence the use of direct current (DC), in which the electrons move in one direction, at a constant speed, producing an electric field that interacts only minimally with the shielding.

Relieving strain on the existing grid would just be the beginning. The AWC would draw wind-farm developers to the region by allowing them to hook new turbines into an existing transmission backbone, cutting the cost of laying their own cables and building the infrastructure to connect those cables to the terrestrial grid. Developers will also be free to place turbines where the wind is. “It’s not just about transmission access,” says Markian Melnyk, who developed the initial AWC concept. “It’s also about providing access to the best sites for wind.”

But the AWC’s greatest advantage would be its sheer scale. It would tie together wind farms distributed over hundreds of miles of coastline, and because the wind will usually be blowing somewhere, its breadth would compensate for the unpredictability of wind at any individual site. Together, the steadier flow of power, combined with the money that wind-farm developers will save by feeding electricity into an existing network, could make wind power cheaper than electricity generated by natural gas or, in some cases, even coal.

Obviously, there is a long way to go. Multiple regulatory authorities will have to sign off before the AWC becomes reality. But the large-scale, holistic approach to offshore wind power that it represents is already echoed by at least two undersea power-transmission proposals being considered in Europe. And if the AWC succeeds in delivering predictable, low-cost, low-carbon power to the mid-Atlantic, expect the number of imitative projects to grow.