Hackers Turn a Flare Gun Into a DIY Camera-Drone Launcher

When you don’t have an advanced flying spy drone, launching a wireless camera 500 feet into the air could be... 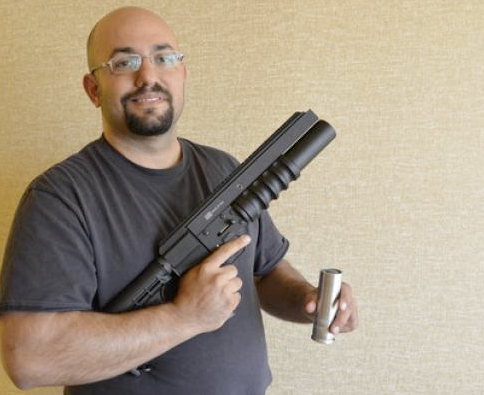 When you don’t have an advanced flying spy drone, launching a wireless camera 500 feet into the air could be your best option. But most people, even in law enforcement, don’t have access to 40mm grenade launchers, the logical choice for such a task. How about using a flare gun instead?

A pair of hackers at the Defcon convention demonstrated a flare gun that can launch a tiny wireless camera, hoping it can be used for search and rescue or law enforcement operations.

This creation is based on the less-DIY Firefly single-use spy cam developed by Israeli military contractors. That system fires a mini projectile, carrying a small camera, from a grenade launcher mounted on a standard M16 assault rifle. The wireless camera sends back 8 seconds of video as it flies through the air — enough of a glimpse to give military personnel an idea of what threats lie ahead.

In the civilian sector, it has legitimate uses: ensuring full coverage of a search area in a rescue operation, say, or drawing a bead on a target in a hostage situation. Hacker Vlad Gostom works as a search and rescue specialist with the U.S. Civil Air Patrol in New Jersey, which inspired him to work on this modified device, Tech World says.

Private citizens can’t buy those little Israeli kamikaze drones, so Gostom and Joshua Marpet modified a 37mm flare gun to serve the same purpose. Their first test involved a small camera inside a hard plastic slug, transmitting images back to a 5.8 GHz wireless receiver. The first test didn’t go so well, according to a writeup in Tech World — the powder didn’t fully ignite, so the camera only flew about 30 feet into the air, and it flew too fast to transmit images to the receiver. But they hope to test a second version later this year.