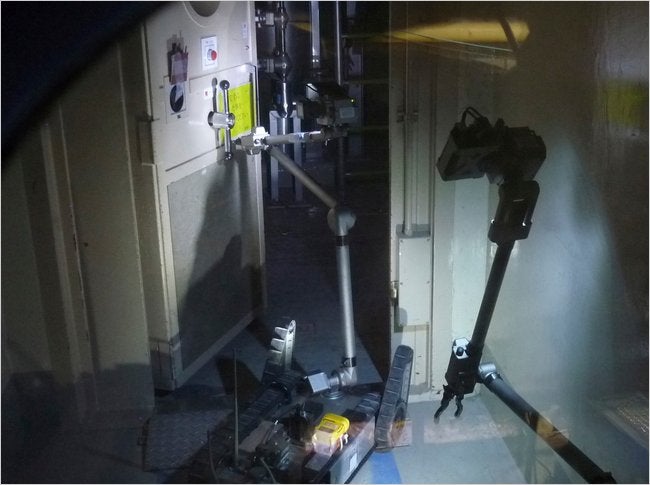 Nudging open a door with its extendable arm, a bomb-disposal robot became the first robot to enter a reactor building at Japan’s stricken Fukushima Daiichi nuclear plant, confirming high radiation levels that are unsafe for humans.

A pair of iRobot PackBots carefully rolled through double doors at the reactor building on Unit 3 and Unit 1, both of which were damaged in the March 11 earthquake and tsunami. Tokyo Electric Power Co. officials spent much of the day Sunday using the robots to conduct radiation and oxygen-level surveys in the crippled reactor buildings. A robot also explored Unit 2 on Monday.

Although details are still scarce, the robots apparently confirmed the high radiation levels that officials had already feared: readings of up to 49 millisieverts per hour inside Unit 1 and up to 57 inside Unit 3, way too high for humans. For comparison, workers in the U.S. are exposed to a maximum of 50 milliserverts per year, according to the Associated Press.

In the days after the natural disasters — and ensuing hydrogen explosions that destroyed the reactor buildings’ roofs — power plant workers initially remained on site trying to avert further problems, but they could only remain in the buildings for a few moments.

iRobot has four robots in Japan, including the two PackBots and two Warriors, which were equipped with radiation-monitoring equipment and other payloads. The robots were the first to enter the plant, although previous reports from Japanese media indicated some Japanese monitoring robots have also been at the site.

The British defense firm QinetiQ also sent in a tank-like robot called Talon, which was used to drive through the rubble of the World Trade Center after 9/11. Talon is equipped with radiation monitoring equipment. QinetiQ also has modified Bobcat front-end loaders, powered by Xbox 360 controllers, which can move debris, according to the BBC.

The iRobot PackBots and Warriors both roll along tank-like treads, using video cameras and other equipment to conduct surveillance and other activities. The U.S. military uses them for bomb disposal, bunker searches and other dangerous situations.

It appears Japan may need the robots’ services for some time to come. On Monday, Tokyo Electric Power Co. officials said fuel pellets at the reactors had melted, sometimes called a partial meltdown. Officials had assumed as much, but Monday was the first time the company described the damage in detail, according to the AP.

Robots will be able to perform some functions, including monitoring and debris removal, but humans will eventually have to enter the facilities to fix electrical and cooling systems, officials told AP.

“What robots can do is limited,” TEPCO official Takeshi Makigami said.

Officials hope the robots can remove some stagnant radioactive water and other debris to limit workers’ radiation exposure.