Video: I Float in Zero Gravity

Weightless on the "vomit comet," along with a batch of middle-school science projects 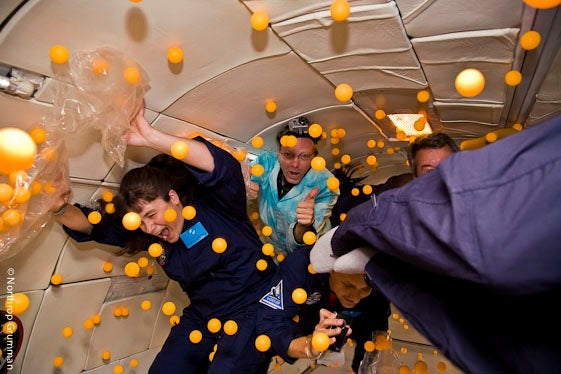 For an hour and a half or so earlier this month, 30 teachers from Ohio middle schools weighed nothing at all. The same went for me; for TV personality “Science Bob” Pflugfelder; and for 2,016 optic-orange ping-pong balls.

We were on G-Force One, a Boeing 727 modified to fly a special parabolic flight path in which its passengers experience zero gravity. We were guests of the Northrop Grumman Foundation’s Weightless Flights of Discovery program, which in the last five years has sent some 1,100 teachers into zero gravity.

In blue zip-up flight suits and special socks color-coded by team (no shoes allowed in zero gravity!), we flew to a 100-mile-long volume of airspace over Rochester, N.Y., that was set aside for our personal parabolic use. The main cabin of the plane had had its seats removed, to turn it into a giant white cylindrical room padded on all sides. After we reached our designated airspace, we were instructed by the team of coaches to lie on our backs on the padded floor, as the plane began its first of 15 parabolas.

First we got heavy, as the plane lifted and we felt acceleration of 2 G’s pressing us into the floor’s padding. Then suddenly the pilot pulled into his parabola and it became very hard to stay on the ground. The first parabola was designed to simulate Martian gravity; for 30 seconds or so, we all weighed one third of our Earth weights. Science Bob took the opportunity to practice juggling, which, it turns out, is much easier when the balls stay aloft for a nice leisurely amount of time.

There followed two parabolas simulating lunar gravity, a sixth of Earth’s, all punctuated by intervals of lying on our backs straining to lift our limbs in heavy double gravity. This slow buildup to the main event is part of the project’s scheme to minimize airsickness for its guests; the zero-gravity flights NASA does for its trainee astronauts do not ease in the participants in the same way, and they last much longer; and a bit of vomit in free-fall is common.

Finally, after the three preparatory parabolae, it was time for complete weightlessness. There’s no sensation like it on Earth. I was trying to hold my handheld video camera steady, but all the familiar rules of physics suddenly stopped behaving — just standing on the floor became an effort, as the merest flex of my foot was enough to send me careening into the ceiling. Or, more likely, into one of the 30 teachers who were similarly tumbling wildly through the air. The basic ability to know whether my head was above or below my feet, that I’ve taken for granted for so many years, abandoned me. Then it was back, as we all fell to the floor, some harder than others. We had been told that the coach would shout “Feet down!” to warn us when gravity was about to kick back in, but in the excitement, I don’t think anyone heard him. In the video, you can hear someone who hit particularly hard moaning “Where was the warning?”

For the rest of the parabolas, the teachers attended to the experiments they had brought for their classes — monitoring a weight taped to a scale as the acceleration changed, dropping objects and watching them fall or float, observing the behavior of a bobblehead doll in zero-G. But the most dramatic was yet to come.

Science Bob, who has appeared on the Jimmy Kimmel Show and will do so again, had brought 2016 ping-pong balls on board. (The original plan was to bring 2010, but as anyone who buys ping-pong balls in bulk knows, they come in bags of 144 balls, and it was easier to get 14 sealed bags through airplane security than 2010 individually inspected balls.)

As we waited for the final parabola, 14 participants each tore open a bag and prepared to unleash. Science Bob, wearing his tie-dyed lab coat, lay on the floor in our midst. Gravity shut off. We emptied our bags on cue, and 2016 orange balls filled the air, swirling and spreading out like a stellar explosion, for what felt like hours.

In 2010, as well as Cincinnati, Northrop Grumman’s Weightless Flights program has taken up teachers in Memphis, Salt Lake City, Honolulu, Gulfport, Miss., and McAllen, Texas, in its ongoing quest to stimulate learning.

How would I have felt at age 12 if my teacher had gone on a zero-gravity flight? Consumed with envy? Inspired to be an astronaut? Perhaps just inspired to be a public school teacher.