Torn between a high-speed plane and a hovering helicopter? Why should you have to choose? 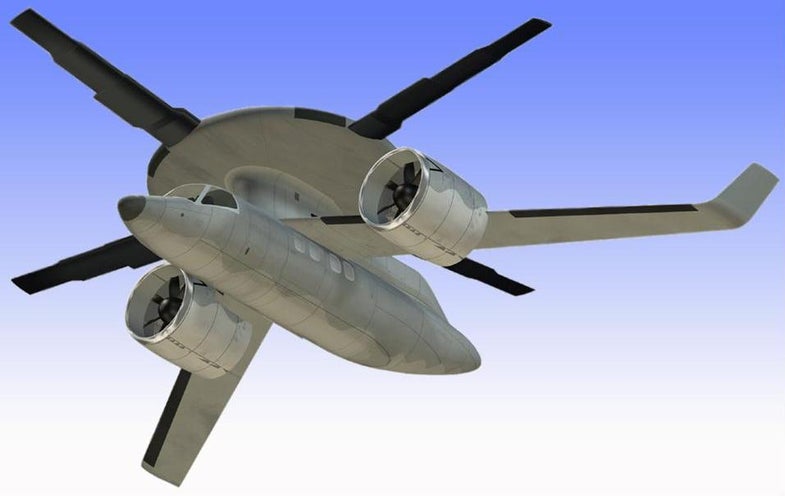 The CSAR DiscRotor, a collaboration between Boeing and DARPA, was approved back in 2008. It’s taken two years to get an animated video of the insane retractable-wing heliplane, but all that time and money has clearly been worth it, because this thing looks awesome.

The DiscRotor combines the hovering ability and landing control of a helicopter with the high-speed, high-altitude flight capabilities of a plane, something that could be of use especially in military situations. A helicopter can get places a plane can’t (the F-35 notwithstanding), since it doesn’t need a landing strip or particularly smooth terrain, but even high-speed (or record-breaking!) helicopters are much slower and more vulnerable in the air.

DARPA says this kind of vehicle “provides survivability, mobility, and responsiveness for troop and cargo insertion.” But blades are fragile and create unwanted drag, which is why we haven’t just stuck a helicopter blade onto an airplane and called it a day.

The blades of the DiscRotor retract into a flat disc, which can in turn be used as another wing when the craft is flying like a plane. At that point, it’s powered by two traditional turbo-shaft engines underneath each wing, and flies more or less like a typical plane. The main problem is that the vehicle needs to be able to transition from plane mode to helicopter mode reliably and smoothly while in the air, and the in-air forces make that pretty difficult. A Boeing rep notes that that is only one of “several large technical challenges.”

The DiscRotor is in phase 1b of DARPA’s testing; a model will undergo wind tunnel testing in 2011.