Researchers Capture the First Direct Spectrum of an Exoplanet

A significant breakthrough in the search for life orbiting other stars 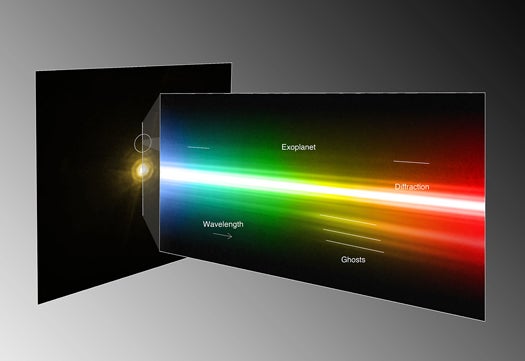 The hunt for orbiting exoplanets is in full swing — NASA recently reported finding five distant orbiting bodies, as well as some other oddities, with its Kepler telescope — but with so much space between us and these faraway bodies, it’s often difficult for researchers to know exactly what they’re looking at. But by keeping close watch on a triple planetary system about 130 light-years from Earth, ESO scientists have captured the first direct spectrum — a kind of “chemical fingerprint” — from a planet orbiting a distant star.

Using the European Southern Observatory’s Very Large Telescope (VLT), the team captured the spectrum from a giant exoplanet orbiting a sun-like star about 1.5 times the mass of our sun. The planets were discovered in 2008 by another group of researchers, but the ESO team was interested in the system because of its likeness to our own solar system.

Researchers were not expecting to find life there, as the specific planet under observation is roughly ten times the size of Jupiter and maintains a temperature of about 800 degrees Celsius. But through an extremely long exposure — more than five hours — VLT’s NACO infrared instrument was able to see through the brightness of the nearby star and capture the spectrum of the planet directly for the first time ever.

So what did the researchers find? Unsurprisingly, they’re not really sure. Planetary spectra offer information on the chemical makeup of a planet’s atmosphere, which in theory should lend insight on how the planet formed, what its surface is like and whether or not life might exist there. But the chemical signature of this particular planet defied even the theoretical models put forth by scientists who thought they knew what we were looking at. It’s a prescient reminder of exactly how much we don’t know about the cosmos — and how much is left to discover.

The researchers have now turned their efforts to the other two planets in the system, with hopes of comparing the spectra of three planets in the same system for the first time in coming months.