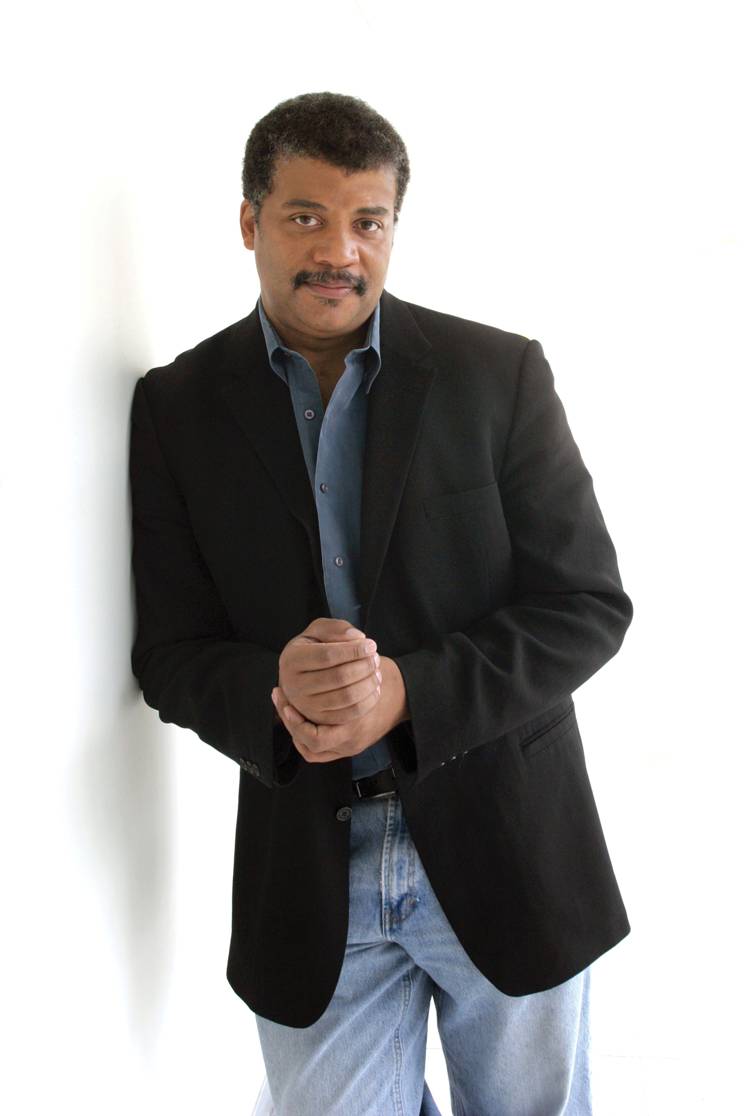 2012 marks the first year in three decades that the U.S. is not launching its own publicly funded manned space vehicle, and it could also be China’s year to shine, on Earth and in space. It’s a transition period for American space exploration, but even amid all this change there’s something greater, yet less tangible, that’s lacking: As a country, we need a clear mission. America’s unofficial space spokesman, Neil deGrasse Tyson, has something to say about that.

Tyson, a science crusader and regular guest on “The Daily Show” and other outlets, has a brand-new book out that tackles some of America’s profound space questions. “Space Chronicles: Facing the Ultimate Frontier” is a collection of essays, a few of which have already appeared in other publications.

It also includes selected tweets culled from Tyson’s enormously popular Twitter feed. So if you’re a devoted NDT follower, some of it will feel familiar.

What is noticeably different is his tone — there’s less gee-whizzery, science-is-amazing wonder, and more geopolitics and policy. Tyson said he wanted to combine his experience in government, research science, education and space evangelism, which he says gives him a unique perspective on each.

PopSci talked with Tyson about “Space Chronicles,” remaking “Cosmos” on Fox, and how to make policymakers realize the importance — and awesomeness — of science. An edited transcript follows.

PopSci: How do you think private space exploration, or at least private space delivery, will impact the way people think about NASA and the government’s role in space? There is a push and pull between people who think it’s a great thing and not such a great thing that NASA is no longer launching Americans into space with our own spacecraft. What do you think about that?

Neil deGrasse Tyson: The original subtitle of the book was “Delusions of Space Enthusiasts,” because the original title was “Failure to Launch: The Dreams and Delusions of Space Enthusiasts.” One of the delusions — I should be kinder and say one of the points of confusion — is what role the private sector will play with regard to the activities of NASA. Many people simply got that wrong. What’s going on here is the private sector is being encouraged — something, by the way, that should have happened decades ago — to actively participate in access to low-Earth orbit.

That is not the same thing as advancing a frontier. Period. Private enterprise cannot advance a frontier, because there is no capital market valuation of a frontier. The frontier is dangerous; it has uncertainty; there are technologies that need to be invented to even test it. The promise of financial return, which private enterprise requires, is not there, if you’re the first to do it. So governments do it. The history of human culture bears this out over centuries. Governments do it first.

PS: This book is a little more politically inclined than your previous work.

PS: You talk a lot about NASA’s budget, for instance, and how politics have poisoned the agency’s future vision planning. Why is it important to you to bring this message home to politicians right now?

NDT: Previous to this book, I was active as an adviser to White House, and NASA, and sort of as a public conveyor of things related to NASA. It’s just my role, on TV and that sort of thing. I didn’t think it ever needed to be a book; I thought I could just sort of talk about it, and people would absorb the concepts and take it to heart. But that just wasn’t happening.

NASA has been in and out of low-Earth orbit since 1962. That is not a space frontier.As far as for right now, well, what is NASA going do next? Well, President Obama says we are going to Mars. Most people don’t know he actually said that, but he said we’re going to Mars. OK, Mr. President, when? ‘Well, sometime in the 2030s.’ Will you be in charge then? ‘No.’ He’s going to be on a beach in Hawaii in 2035, and it’s going to be carried out by some president to be named later. And that concerns me deeply. We live in a time when a president makes some kind of promise, but does not have the political continuity set in place for the future to make sure it follows through. President Kennedy said we will go to the moon within this decade, because he would have [still] been president, had he lived. It’s something he could have shepherded. Imagine if he had said, ‘we’ll go to the moon sometime before the century is out.’

PS: You also talk throughout the book about China and India, and their own investments and progress in this area. What do you think we should do as a country, and what do you think people should focus on, to make sure we don’t fall behind? How do we drive action on that front?

NDT: The issue here, is do people understand what it takes to achieve science literacy in a nation such as 21st century America? I don’t think they understand, even people who claim they understand. Solutions to problems tend to be thought of as, ‘If you do A you will solve B.’ If you want people to be science literate, let’s have better science teachers. This is the A-to-B thinking. Now, of course we want better science teachers. But what happens to you after you’ve had the science class? Maybe a flame was lit within you because the teacher was awesome, but now the teacher is gone. Will the flame stay fanned within you? There’s not much left after you’ve had your great teacher. By then it has to be self-motivating. What kind of ambition will you have upon leaving the educational pipeline? What great, grand projects await you? We don’t know. There’s nothing staring at you.

When the government embarks in a major science activity, such as what we did when we went to the moon, everybody knows about it. And everybody becomes a participant in some way. Either an actual participant, by choosing to major in science because they want a taste of that frontier, or an emotional participant, because they embrace the activity — even though they become English majors.

PS: That was me. And some of our readers.

And all of a sudden, the attitude and the state of mind of the nation shifts. You stimulate an entire generation of people to become scientists, technologists, engineers and mathematicians. Out of their innovations and their curiosities, entire economies get invented. And it transforms the world, and makes tomorrow come.

PS: You’re making a new version of Carl Sagan’s “Cosmos” series, which itself inspired a generation of people to fall in love with science. How did you get involved in this?

NDT: After Carl Sagan died, within a year of his death, I was asked to join the board of the Planetary Society. It was a great honor for me to be thought of that way, implicitly replacing him in the role as a public educator. It was in that capacity that I met Ann Druyan, his widow. She is one of the most enlightened people I know, and has a very deep sense of humanity. And when you marry that to a deep sense of the frontier of science, you have a potent storytelling mechanism to not only teach people what science is, and what it does, but why it should mean something to you, and why it matters to society and everything that we hold dear.

So we are scripting now, and I’m the host and narrator. We start shooting in the spring and it will air in spring of 2013.

PS: In the book, you also talk about the Cold War being a driving factor behind the space race. The reaction we had to the space shuttle delay after Challenger, and what that meant to us, was different when there was an enemy in Russia than it was in 2003 with Columbia. Not that anyone wants another Cold War, but will that drive a journey to Mars, if China decides to land on the moon?

NDT: If China sets up a permanent base on the moon, and tries to explore Mars on a time scale shorter than ours, that will be another space race. I am just certain of it. I am trying to get people to do this without having to view it as an act of war, or an act of a response to an adversary. One way is because of economics; the government could do this, and they could say, ‘The economic return is the scientists and technologists who invent the new tomorrow.’ Space exploration is the carrot that incites people to become scientifically literate. So I view it as an economic development plan.

I would rather people thought of it as, exploration is a beautiful thing and it’s enlightening and inspiring. And I’ll get maybe 10 percent of the people on that argument. It’s the 90 percent that outnumber us.

PS: What about exploration for the sake of exploration? Lately we’ve been hearing a lot about exoplanets, for example. How are Kepler and other findings changing astrophysics in a larger sense? Some of these findings are really bizarre and interesting, things that we would not have expected to see in reality, that have been part of science fiction or our imaginations. How do these findings change our view of our own place in the cosmos?

NDT: Deep in the heart of that is the search for life. Any life at all, or ideally life as we know it or certainly intelligent life. That’s at the heart of this motivation. Because otherwise, Kepler could be designed to look for any old planets.

We knew beginning this that we were completely ignorant of what other star systems might be like. So we were completely open to what we might find. You go with some expectations, sure, and when you find something that confounds your expectations, the press writes that as this overturns the apple cart. No, there was never an apple cart. There was, ‘Maybe we could be this way, we don’t know, let’s find out.’ So some ideas had to be rethought. Others confirmed things. Others were some things that were not even questions we had, because we didn’t even know the right question to ask in the first place.