Also, what to know about “Spiritual Lounge mode." 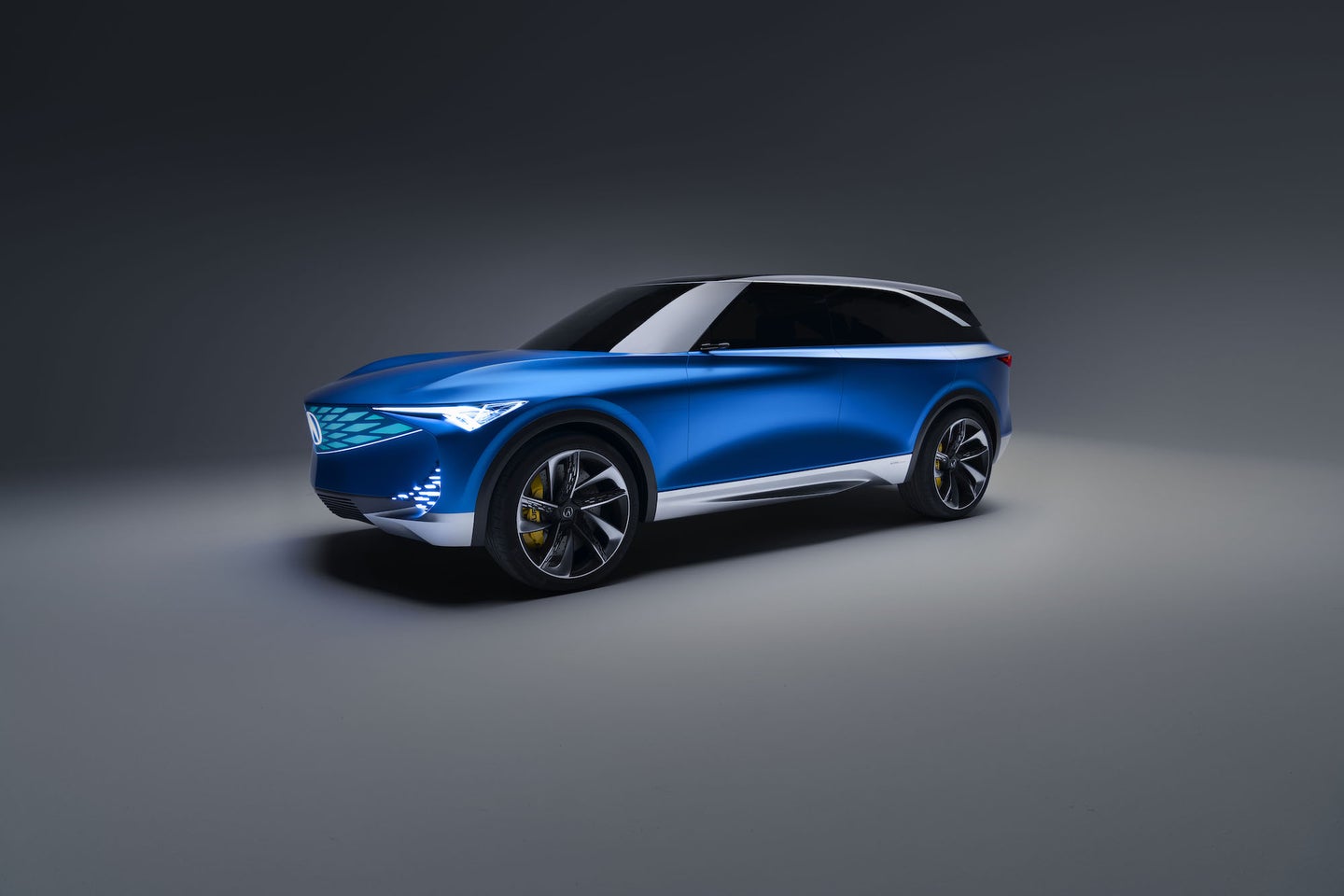 During Monterey Car Week in California last weekend, Acura revealed its Precision EV Concept with a sleek and futuristic silhouette. The concept vehicle is intended to set the design tone for the brand’s all-electric line, showcasing eye-catching lines and LED lighting set in a luminescent sapphire blue finish the brand is calling Double Apex Blue. Acura, the Honda-owed luxury brand, spilled some details about the interior, and we know from the renderings that designers are favoring a two-grip yoke-style steering wheel. The concept also features what Acura is calling “Spiritual Lounge mode,” which will retract the steering wheel, pipe in “soothing scents” and project animated water scenes when the car is autonomous mode.

While that vehicle and its futuristic lounge mode is just a concept for now, what’s real and set for its debut during calendar year 2024 is the brand’s first all-electric model, the Acura ZDX SUV. In case that name rings a bell, it’s because Acura built a gas-powered ZDX from 2010-2013 that wasn’t particularly popular. The ZDX will take design cues from the Precision EV concept, although Acura hasn’t revealed which cues will survive the production process.

For the new battery-powered ZDX, Acura borrowed nothing from the old one except for the name, and decided the “Z” was a good fit for its new zero-emissions vehicle. Toyota opted for a similar moniker for its bZ4X, which is unfortunately experiencing some new-model pains and a major recall.

None of this is shocking, as automakers worldwide are jockeying for position in the EV landscape. What is interesting, however, is that Acura is teaming up with an unlikely partner to power its EV line: American legacy giant General Motors and its Ultium platform.

“The partnership with GM helps unlock economies of scale that benefit both companies and accelerates Acura’s electrification roadmap in North America,” Emile Korkor, assistant vice president of Acura National Sales, tells PopSci. “The Acura Design Studio is leading the top-hat styling direction of the all-electric ZDX. There has been co-development work of the vehicle between Acura and GM engineers, but Acura is responsible for the design of the new ZDX.”

Ultimately, that means the concept may be a pie-in-the-sky wish for the designers tasked with creating something unusual. However, when the production version of the ZDX is built, some of those futuristic details will likely be smoothed out or omitted altogether.

Featured prominently in GMC’s Hummer EV and Cadillac Lyriq SUV, GM’s Ultium platform is designed to be flexible and modular. American Honda recognized an opportunity to harness already-developed technology. The platform is built on a proprietary NCMA combination—nickel, cobalt, manganese, and aluminum—in the cathode (that’s one of two electrodes in a battery), which improves overall stability. Current batteries often use much larger amounts of cobalt, which is not only expensive but largely mined in Congo, where forced and child labor are reportedly exploited to collect the mineral.

Ultium’s rectangular cells take up less space and can be configured in two ways: stacked like a deck of cards or slotted vertically like a sliced loaf of bread. As Ultium is deployed in vehicles of different sizes and power needs, engineers can adjust the number of cells. In the Hummer EV, for instance, the total battery weight is nearly 3,000 pounds and consists of 24 individual battery modules. Cadillac’s Lyriq uses half that with 12 battery modules. GM says its battery packs can use six, eight, 10, 12, or up to 24 modules in total, depending on what is needed for that particular vehicle. These configurations allow for creative configurations that work around the vehicle’s mechanical parts with fewer constrictions.

Acura co-developed the ZDX with GM with the intention to use Ultium batteries. Next, Acura is planning to break off to launch additional EV models on its own global EV platform. Honda has dabbled in EV production in the past with the mostly-forgotten Fit EV, EV Plus and the simply-named e, which was only available in Europe and Japan. All-electric vehicles have come a long way since then, and the brand is trying again with the GM partnership.

“Following ZDX will be an additional number of Acura EVs,” Dave Gardner, American Honda’s executive vice president for national operations and sales said during a media briefing last week. “That’ll be based on the company’s new global e:Architecture, starting to arrive in 2026. These are exclusive products, which we are designing and engineering completely from the ground up.” In 2021, Honda announced its plan to make battery-electric and fuel cell electric vehicles to represent 100 percent of its North American vehicle sales by 2040, starting with 40 percent by 2030 and 80 percent by 2035. Perhaps even more optimistically, the company has set its sights on carbon neutrality for all products and corporate activities by 2050.